Metro Vancouver’s office vacancy has dropped to the lowest in North America, but gross office rents for the region remain among the most affordable, according to figures released by Jones Lang LaSalle (JLL). 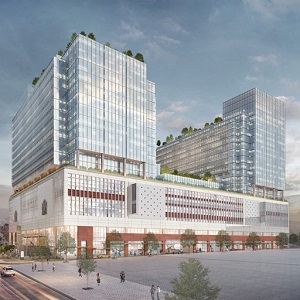 The Post will bring 1.6 million square feet of office space into the Vancouver market, but a large portion of it is already committed to Amazon. (Image courtesy Quadreal)

At 8.1 per cent, Metro Vancouver’s office vacancy, including suburban markets, is the lowest on the continent, below that of New York at 8.5 per cent, Toronto (8.6) and San Francisco (9.1), according to a presentation at the Vancouver Real Estate Forum by JLL’s senior vice-president in Vancouver, Mark Trepp.

“Despite the fact that Metro Vancouver has one of the lowest vacancy rates, we’re still the third-most affordable in North America, which would suggest that perhaps we’ve got some runway in terms of rental-rate appreciation,” Trepp said while leading a panel discussion on the office market.

Trepp and his fellow panelists agreed that even with up to 1.5 million square feet of new office space potentially delivered to market in the next three to five years, the Vancouver market would remain “in balance”, peaking at no higher than 14 per cent vacancy when the new supply arrives.

By 2022, the downtown office vacancy rate will arrive at a number somewhere between nine and 14 per cent, Trepp predicted.

Vancouver is a “landlord’s market”

“Even in the worst-case scenario, the vacancy rate peaks at 14 per cent, which is a tenants’ market,” he said. “It’s not blood in the streets.”

Trepp said JLL considers any market with a vacancy rate of eight per cent or lower a landlord’s market, and in the downtown the most recent vacancy rate is 6.5 per cent, though that is likely under five per cent due to space lease but yet-to-be occupied.

“We are decidedly in a landlord’s market,” he said. “Obviously we’re doing something here right in terms of driving employment to our country.”

Trepp said JLL believes there are 12 buildings with office components that will likely get delivered to market within the next five years. There are currently seven buildings under construction in Vancouver for a total of 1.35 million square feet, which equates to roughly five per cent of the region’s total office inventory.

Among the new projects are:

Just this week, Amazon and QuadReal Property Group announced the former Canada Post building on Georgia Street will be converted into a 1.6 million-square-foot two-tower building. It will house 3,000 new Amazon staff and 4,000 other workers at the British Columbia Investment Management Corporation (BCI)-owned former mail centre.

QuadReal Property Group will manage “The Post” for BCI.

For GWLRA, the timing for the Vancouver Centre II Tower made sense as it will get out ahead of the next wave of projects, said panelist Rob Kavanagh, the company’s vice-president of asset management.

“We’re very confident obviously in the Vancouver market,” he told the audience.

He said the tower, which has now broken ground, replaced an aging parking building and will increase the density around the Vancouver City Centre SkyTrain-Canada Line hub.

“That was a good utilization of a legacy asset,” he said.

Kavanagh said company data predicts local job growth would reduce the vacancy rate to about 4.8 per cent by 2021.

He said the Conference Board of Canada expects about 20,000 new jobs to be added to Metro Vancouver each year, which would require an extra three million square feet of workspace in the region.

“There’s going to be a strong demand for these new projects once this next development cycle ends,” he said.

He said he expects all of the next wave of planned office projects in Vancouver will eventually get built.

“It’s an issue of when, not if,” he said. “Some of those sites are still in a rezoning stage and that’s one of the things about Vancouver — just the time it takes to actually get a property fully entitled and then built. It’ s a very protracted process.

“It’s probably 2024-plus for some of these buildings,” he said. “I’m thinking they will all get built.”