The residential land market set the tone as approximately $6.9 billion in property sales were transacted across Metro Vancouver in the first half of 2017.

That pace matched the torrid first-half dollar total of last year, according to a new report by Altus Group. 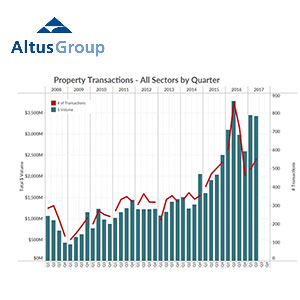 “I think the residential land market is by far the biggest contributor to the overall market,” said Paul Richter, the director of data solutions with Altus Group.

The total value of residential land investment in Metro Vancouver for each of the last six quarters has surpassed all of the residential totals for the previous 36 quarters, according to Altus Group’ data.

The second quarter of 2017 saw a total of 550 investment property sales transactions in the region worth more than $1 million. Those deals represent a total investment value of $3.4 billion, according to Altus Group’s Vancouver Investment Transaction Stats – Q2 2017 report released on Aug. 31.

Residential and Industrial Commercial and Investment (ICI) land deals accounted for 54 per cent of the overall capital flows.

Richter told RENX on Wednesday the overall dollar values for all asset classes for this year could surpass last year’s total, which tracked far and above any regional total since Altus started tracking the data in 2000.

He said the first half of 2017, however, recorded only 40 per cent of the total number of deals recorded in all of 2016.

He said many developers are buying into recently rezoned properties along transit lines as Metro Vancouver leaders expand the region’s SkyTrain system and densify commercial and residential hubs around the new and expected stations.

The SkyTrain last year opened the new Evergreen Line extension into Port Moody and Coquitlam, and regional leaders are now working out plans to expand the Millennium Line from the Commercial-Broadway hub along the Broadway corridor into the Westside of Vancouver.

“There has certainly been a run on properties in areas like the Broadway corridor with properties trading at a higher value than what they may have previously before the speculation about the Broadway Millennium Line extension,” he said. “The values (there) have been significantly higher than similar product in other areas of Vancouver.”

The new data comes as the Bank of Canada increased its key interest rate for the second time in two months.

“I don’t anticipate there being even a blip with this most recent announcement,” Richter said, referring to the property investment market in Vancouver. “It’s too marginal. A lot of the cost in the commercial real estate market is ultimately passed along to the tenant, so I don’t anticipate the interest rates at all dampening the appetite for assets.”

In Edmonton, Altus tracked 180 transactions worth $545 million in the second quarter of this year. That total marks a 37% decrease from the first quarter of 2017, and an 18% increase from the same quarter last year.

So far, this year, there has been approximately $1.41 billion in property deals in the Alberta capital.

In Calgary, the values of deals so far this year totalled about $1.52 billion. Calgary notched 109 transactions in Q2 2017, representing a total investment value of $531 million.

The overall investment volumes there were down by 47% from the first quarter of the year and the number of transactions fell by 19%.