The longtime shortage of industrial land and buildings in Vancouver is becoming increasingly acute, leading to a surge in prices that have reached new heights — especially in the eastern part of the city. 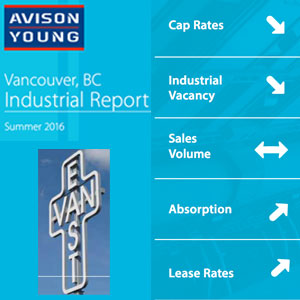 “I think it’s partly due to the fact that East Vancouver has become cool, with new businesses like craft breweries and tech startups bringing a good young energy to the area,” said Avison Young principal Russ Bougie of a new factor influencing prices. “I think it is also just a function of the general increase in pricing of all asset classes in the core of Vancouver.”

$96 million spent on 30 properties so far

The commercial real estate services firm just released its summer 2016 industrial report for British Columbia’s largest city, which shows that ongoing strong demand for industrial properties from owner-occupiers and investors is also driving up prices. More than $96 million was spent on 30 properties in the first half of the year, compared to 65 deals worth $164.5 million in all of 2014 and 55 worth $135.6 million last year.

“It is mostly local private investors and developers who own several other industrial properties in Vancouver,” who are making these purchases, according to Bougie. “Historically, more than half of buyers have been owner-users, but 2016 has seen more demand from developers and investors.”

The largest industrial building sale through June was the 33,750-square foot property at 149-159 West 7th Ave. in Mount Pleasant, the historical heart of industrial warehousing and light manufacturing in Vancouver, which sold for $14.5 million.

Likely significant rental rate increases and redevelopment potential in the mid-term have many investors ignoring capitalization rates while purchasing industrial land and buildings on a speculative basis, which is driving up pricing further and tightening supply.

“All the industrial areas are developed but we will see the redevelopment of older buildings, starting in areas where the buildings are the lowest density such as South Vancouver, and where there’s the highest potential development density, particularly Mount Pleasant,” said Bougie.

While most industrial redevelopment has been taking place in Mount Pleasant, there are large projects under construction in South Vancouver and Strathcona. Development is also taking place in the suburbs of Surrey and Delta.

Developers are looking at multi-level industrial buildings serviced by freight elevators to compensate for the lack of land, and Bougie expects at least two or three of these complexes to be delivered in the next 24 months.

“I forecast continued strong demand from both users and investors, and I think the demand for multi-level space will exceed people’s expectations,” he said.

PC Urban’s IntraUrban, a 167,000-square-foot strata industrial development located on 4.6 acres in South Vancouver, was sold out before construction started.

While availability remains limited with a 1.7 per cent vacancy rate for Vancouver industrial properties as of June 30, leasing activity has increased in the first six months of 2016 when compared to the second half of last year.

Vancouver’s newest warehouse facility, a 140,000-square-foot development from The Glassman Group at 8385 Fraser St., has been 100 per cent pre-leased and is responsible for the biggest lease transaction of the year. Direct Tap, a logistics and distribution company for the British Columbia craft brewing industry, leased 78,293 square feet of new shell warehouse space. Flooring companies Burritt Bros. and Colin Campbell leased 25,446 square feet and an undisclosed tenant rented the rest.