Victoria’s aging population of well-off downsizers, a severe shortage of rental homes and other m... 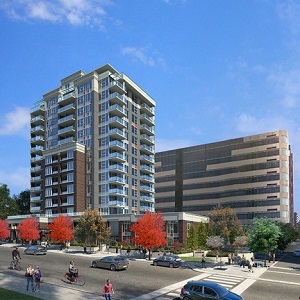 Hudson Walk by Townline Developments is one project among several which are adding a significant number of rental apartments to the Victoria market. (Image courtesy Townline)

There are currently between 800 and 1,000 purpose-built rental apartment units being built in Victoria, said Justin Filuk, director of development at Townline Group of Companies, which is helping lead Victoria’s downtown apartment upswing.

“It’s happening not just in downtown Victoria, but it’s happening in the western communities as well, where a lot of developers are taking a stab at building rentals,” he told RENX. “There is incredible demand for (rental apartments).

“There is a lot of real estate investment trapped in pension funds looking to replenish their assets with newer stock, so they’re unloading older buildings . . . and looking for opportunities to build new rentals.”

“We finished Hudson Walk One last summer, and then we just completed Hudson Walk Two,” Filuk said, referring to the pair of 16-storey buildings that together added 284 rental units to Victoria’s urban core.

He said it took only three months to lease all of the units when they came to market.

“A lot of the product coming online is going after the higher-end user looking for higher-quality finishes, amenities in buildings and those sorts of things,” he said.

“We built it, leased it up and everyone was shocked at the absorption and the rates we were getting. So that’s what caused a bit of a shift in the market and prompted a lot of other developers to try it, or start looking at it as an opportunity.”

Victoria’s population is expected to grow by 20,000 by 2041 and city staff estimate about 13,500 more apartment units will be needed to accommodate that growth, according to the Victoria Times Colonist.

Meanwhile, the City of Victoria says the population older than 65 is expected to grow to 29 per cent, up from 17 per cent, in the same time period.

The rental apartment vacancy rate in Victoria is hovering around 0.5 per cent, said Hans Van de Kamp, a broker with Macdonald Commercial in Victoria.

“Pretty much zero vacancy” in Victoria

“It’s pretty much zero vacancy,” he said in an interview, adding much of Victoria’s current rental inventory was built in the 1970s.

“That’s 40-plus years ago when there were certain government incentives to build out rental buildings,” Van de Kamp said. “There hasn’t really been anything done of any numbers for several years and it really started kicking in in the last few years.”

Most of the development has been in Victoria’s urban core, but there have also been projects in Saanich, Esquimalt and Oak Bay, to a lesser extent, he said.

There have been several factors at play.

“There are more and more people moving to Victoria. The net migration is certainly coming up over the last five years.”

Seniors are also cashing out of their valuable B.C. real estate, moving to Victoria and retiring in high-end rental apartments, he said.

“They’re using their family homes as their nest egg so they’re cashing out, taking advantage of this higher-valued market,” he said. “To some folks, it just makes more sense to rent, moving forward, instead of getting back into this higher-priced market.”

Filuk said the city is encouraging developers, but spokeswoman Rebecca Penz confirmed via email the city has no specific incentive program to spur developers to build rental apartments. However, the “current market fundamentals mean almost half the new units in the city are coming in as purpose-built rental projects,” said Penz.

“We don’t have an inventory of purpose-built rental currently, but it represents a significant proportion of our housing stock,” she said. “The city is currently developing a strategy for further incentives, with a focus on retention and rehabilitation of existing stock, along with a new inventory.”

Derek Lobo, the CEO of SVN Rock, a commercial brokerage and advisory firm in Burlington, Ont., specializing in apartments, said a similar boom is taking place more prominently in other mid-sized Canadian cities such as London, Halifax and Edmonton.

He said Victoria’s demographics help to explain the rental boom in the B.C. capital.

“Victoria has one of the older median populations in all of Canada,” he said. “These people are faced with a difficult situation. They’re relocating to the town, but the quality of the rental apartments doesn’t match the quality of their financial statements.

“They have money in their pockets, but the apartments are all old.”

The other broad section of renters are young professionals who can’t afford a house and may not be in Victoria for very long.

“Victoria isn’t a place where affluent young people go to live,” he said. “There are some, but it’s not like downtown Vancouver or downtown Toronto.

“Victoria is a place where affluent Canadians go to retire.”