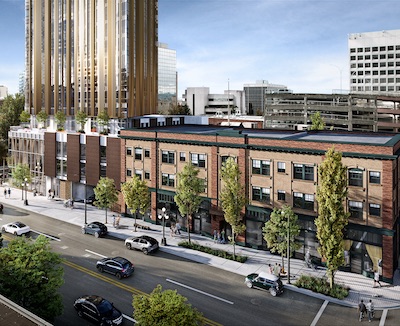 He’d coveted the 21-unit Montrose apartment block with six units of retail, one of several historic buildings in the area, and a block away from another heritage project he’d completed, The Dominion Rocket.

When he approached the owners to buy the Montrose apartment building, he discovered they also owned other tenanted commercial buildings on the block between Fort and View Streets. So, he purchased all three of the peoperties.

“I didn’t have a great plan — I just knew it was good real estate and I really liked the Montrose building,” said Fullbrook, the chief executive officer of Merchant House Capital Inc. (MHC).

Last fall, the City of Victoria approved the Montrose-Wintergarden, which includes the heritage-designated, upgraded Montrose apartments alongside a 20-storey, 100,000-square-foot hotel, a three-storey atrium lobby, two storeys of boutique office space and a fourth-floor restaurant and bar.

The project fits with the city’s significant density that is allowed for the site.

Fullbrook said Merchant House stands apart from the usual development strategy in that the company isn’t interested in redeveloping for quick yields. Rather, it wants to generate a long-term income stream and create vibrant communities.

Fullbrook believes the future is in mixed-use development, with housing and amenities that support workers on-site and other day-to-day necessities within walkable distance, as opposed to office towers that sit like silos, half vacant.

And although Merchant House enjoys working in the Victoria region, it’s not exclusively a Victoria developer, he said. The company has projects in the capital region as well as in Metro Vancouver and Alberta.

“We pick our spots. We look at the market,” Fullbrook said. “We try to do a deal a year and finish a deal a year. We’re not trying to grow a real estate platform, but find locations that have all the ingredients that create a 24-hour community.

“We are involved in land use and planning and urban development, but the pallet of colours for us is mixed-use industrial development, retail shopping centres. We do all that work.

“We aren’t specifically a residential home developer, but when you have a site and the site has surplus density and you’ve got zoning that allows for some vertical development, obviously then you are in the residential development business.”

The Montrose development meets the city’s goal of preserving its rich heritage as well as meeting its need for hotel rooms. Hundreds of hotel rooms had been lost over the years due to the rise of short-term rentals and a lack of new hotel development.

As well, the heritage piece allowed MHC the density it needed for the Wintergarden tower.

“What made that deal possible was the Montrose,” Fullbrook said. “It was the piece of the property holding that created all the opportunity because it was (at the time) an undesignated heritage building that was just a building you could see in any cool little urban area.

“The City of Victoria is so oriented toward preservation of heritage, and the preservation of that building allowed a lot of leniency around really moving density attributable to that site onto another site.

“So we took the density of the Montrose building and we covenanted that the Montrose Building would be preserved, designated heritage, and we would also preserve all the residents in there – we would not terminate tenancies.

“That was the basis of the application, that we would renovate, keep all the people there, both residential and commercial tenants. And we are going to sustain the community that’s been established over the years, we are going to move density to the corner, and on the corner we will do something grand.

“We are agnostic,” he added. “We have a lot of flexibility. We just try to think of, ‘What is the best kind of project to have right now in the market? Where is the demand? What does the real estate give us? What does the location offer?’ For that site, it created a compelling case for a new hotel.”

Fullbrook may not consider residential his forte, but he said he’s proud of a unique and pioneering residential project undertaken prior to acquiring the Wintergarden site. Nearby at 759 Yates St. is The Dominion Rocket, a historic former 100-unit hotel that had seen better days.

At the time, it was a rundown flophouse with a grubby bar and liquor store at ground level. The architecture and location, however, gave it potential.

He applied for a variance to eliminate residential parking because of its urban location and applied to convert the hotel into a unique 97-unit apartment building whose target market was young millennial singles. They’d also create common spaces to build community and greater tenant stability.

The 400-square-foot apartments have bathrooms, kitchens, built-in furniture and came at an average rent of around $825 per unit, including utilities.

“We didn’t want to operate a crappy hotel, and apartments were really highly valued, so (we thought) ‘Let’s convert all that cash flow into residential apartment cash flow. That will get a better cap rate and a higher value.’

Merchant House sold The Dominion Rocket in 2017, but generally prefers to hold onto its assets for the long term, even the ones that aren’t redeveloped.

Last year, MHC purchased a site outside of Victoria in Sidney, considered a highly livable seaside town that has a covenant on heights to protect resident views.

The luxury 42-unit waterfront apartment and retail building at 9843 Second St., originally built as condos, underwent a major renovation about a decade ago, Fullbrook said. It’s a stable building with rare vacancies and had never been sold.

He called it “finding a needle in a haystack.”

However, he has no near-future plans for the site. There is no application underway, even though the community plan allows for three times the density.

“We are a different bird from the typical, and I don’t mean to judge my colleagues in the industry, but we buy on income. When we bought the Blanshard site, we bought on the basis of incomes of the properties in place. We said, ‘This has got redevelopment value, but we are really buying it on income.’ ” 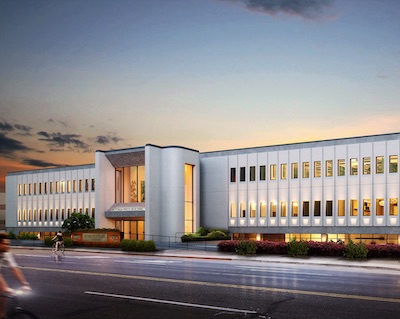 MHC’s redevelopment of the Victoria Times Colonist property, at 2621 Douglas St., involves the conversion of the 130,000-square-foot newspaper building into a 300,000-square-foot mix of office, retail, residential and social amenity space over three floors, reborn as the Victoria Press Building.

In that case, Merchant House had bought the building with the newspaper’s lease built into it, so after the $20-million renovation and seismic upgrade, the tenant will move back in.

The city granted heritage status to the 1971 exterior as well as a 10-year tax exemption for MHC.

Throughout the pandemic the firm managed to lease-up the building.

The 9,000-square-foot former pressroom with its 50-foot ceilings will be used for a dramatic brewery operation and the 43,500-square-foot rooftop is set for a public patio and restaurant. Construction completes this summer, Fullbrook said.

MHC will apply to build a 150,000-square-foot residential tower on the current parking lot. Again, there will be the live-work-play, 24-hour vibrancy to the building, as well as that income piece, he said.

“I hope when we get the Victoria Press Building completed, people will see a master-planned concept,” said Fullbrook.

“If we find the right locations in the right kinds of markets, we don’t have to be that smart — as long as we do the design and renovation correctly so that what we get at the outcome is real estate that has this 24/7 operation expectancy.”