Seacliff Properties and Reliance Properties have created a joint venture to build a $1.2-billion,... 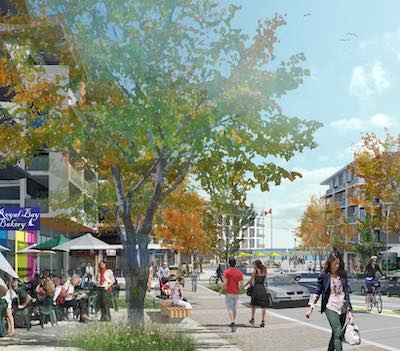 Seacliff Properties and Reliance Properties have created a joint venture to build a $1.2-billion, master-planned seaside community during the next 15 years at Colwood’s Royal Beach, in the Greater Victoria area.

Royal Beach will be a collection of neighbourhoods totalling 2,850 homes (single-family houses, townhomes and apartments), plus hundreds of job spaces in commercial buildings and retail spaces. The site is 135 acres of oceanfront land with 1.4 kilometres of shoreline. More than 47 acres of the site will be dedicated to public parks and greenspace.

“Royal Beach is a spectacular property and a really unique one, as it was previously operating as a rock and gravel pit for nearly 100 years. It ceased operations back in 2008 and we acquired the site in 2017,” Georgia Desjardins, director of development for Seacliff Properties, told RENX in an interview.

“It’s a really unique opportunity where we have this blank slate of 135 acres of oceanfront land to really create something new within the City of Colwood and create a heart within their city on the seaside.

Desjardins said numerous development plans have been proposed over the years for the site. The proposals have evolved and changed over time as the development and financial landscape has changed, but no actual construction took place.

This will be her company’s first major development partnership.

“We’ve formed a joint venture 50/50 partnership with Reliance . . . It’s a really exciting path Seacliff has gone down,” she said. “We just thought Royal Beach is such a special property with so much potential, and obviously the scale of it is enormous.

“So we thought this was the perfect project to go out and find a partner who really shared our vision and Reliance, of course, brings with them expertise and knowledge and we’re so excited to get going on it with them.”

Jon Stovell, president and CEO of Reliance Properties, described Royal Beach as a “very significant, high-level project” for the region. Both Reliance and Seacliff are based in B.C.

“We’re typically more of a raw land developer and we’re going to work together with Seacliff to fully execute and build this whole project over the next 15 years. It’s about a $1.2 billion capital cost and investment to the community, so it’s very significant,” he said.

Reliance Properties is a family-owned company which has focused on developing housing and office real estate for nearly 70 years.

Stovell said construction on Royal Beach will begin in March or April with a significant intersection upgrade at the entrance to the site.

“Then we’ll start with some of the initial phases and we’ll expect to see some single-family home lots and also some multifamily and some commercial space down at the waterfront completing in late 2024,” he said. “Then, kind of a steady progression.

“It depends on the economy and demand and evolving demand, but we’re projecting a really steady progression . . . about 200, 225 homes a year.”

He said the project will also include retail, food and beverage, and potentially office and hotel space.

The site has highly varied topography and slopes down from the main road to the water, allowing all the homes and buildings to have water views. It has about 1.4 kilometres of beach front and is in an area already experiencing development.

Other development in the area 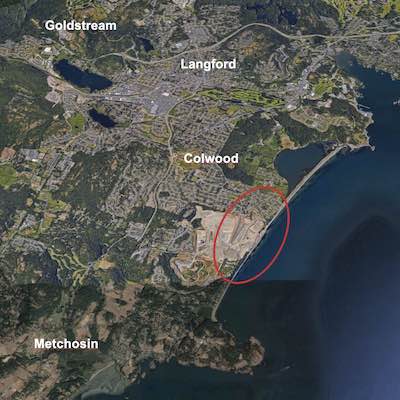 Royal Beach will be constructed along the ocean in Colwood, just outside Victoria. (Courtesy Reliance, Seacliff)

“It sits right across from another project called Royal Bay, which is not on the waterfront but has a very significant retail centre going in with all the services for the community, grocery, pharmacy, liquor store, that kind of thing,” Stovell said.

“I understand the province is building a secondary and archiving and visitor facility for the Royal B.C. Museum. That’s going to be a very significant attraction and it’s really right next to Langford, which is this rapidly growing community which offers all the services all the way from big box down for residents of the area,” he continued.

“There’s also two new schools. One has already been developed and filled up immediately and another one is going to be starting construction next year: Two new schools – a high school and an elementary school – within a quarter-mile of the property.”

As well, Stovell said B.C. Ferries is considering a new passenger ferry from the waterfront at Royal Beach to downtown Victoria.

Desjardins said Seacliff Properties has held strong conviction for the future and potential of Vancouver Island for many years. The company is privately owned with more than 30 years of experience in the acquisition, development and management of large-scale projects through Western Canada.

It has five large-scale master-planned communities at various stages of the development process on Vancouver Island.

“That’s why we’ve been so bullish in our position there, picking up these five large-scale, master-planned communities going back to about 2013-2014. That’s when we really started placing some significant investments on Vancouver Island,” she said.

“Certainly from a demographic perspective, the lifestyle that Vancouver Island provides, the Baby Boom generation, we see a huge potential for people wanting to move to Vancouver Island for the lifestyle and the climate and certainly the affordability that it still provides when looking at real estate opportunities in the Lower Mainland.

“A combination of all those factors is what’s playing into driving the market over there.”

Officials say Royal Beach has the potential to generate more than 700 jobs per year for the next 15 years as the site is built out.

The Capital Regional District’s Growth Strategy identifies Colwood as a centre for urban growth and densification. Its population is projected to increase by approximately 30 per cent by 2038, accelerating the need for both employment opportunities and housing.

Kerry Gold Residential Market Trends Metro Vancouver Jan. 18 2022
M
Mario Toneguzzi Business reporter
Mario Toneguzzi, based in Calgary has 37 years of experience as a daily newspaper writer, columnist and editor. He worked for 35 years at the Calgary Herald covering sports, crime, politics, health, city and breaking news, and business. For 12 years as a business writer, his main beats were commercial and residential real estate, retail, small business and general economic news. He nows works on his own as a freelance writer and consultant in communications and media relations/training.