Reliance Properties will partner with international real estate developer and investor Hines to b... 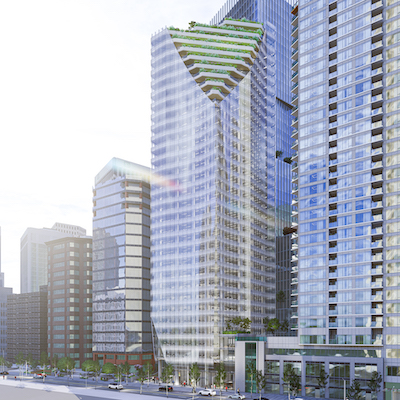 Reliance Properties and Hines will JV to build this 32-storey tower at 1166 West Pender in Vancouver. (Courtesy Reliance)

The new 361,000-square-foot tower will usher in a series of firsts. It is Hines’ first project in Vancouver. When demolition begins – as soon as this fall – it will be the first office project of this scope in Vancouver to begin construction since the pandemic struck in March 2020.

Finally, the building will be among the first anywhere to incorporate post-COVID office wellness and design concepts from its inception.

“We had a great project, a great site and a really enticing design,” Reliance president and CEO Jon Stovell said of the Hines JV in an exclusive interview with RENX. “We found an alignment and what I think is quite interesting is this entire transaction, from almost the first meeting and all the way through  . . . was all done during COVID. This just shows their commitment to this market.”

A development permit is already in place as the concept was originally approved by the city in 2018.

Reliance purchased the property in 2016, intending to replace the 1974-built structure once it was vacated by Canada Revenue Agency (CRA), which moved to its new offices on Terminal Avenue. The existing tower is 11 storeys and contains about 151,000 square feet of space.

“Also a modern building, particularly now with all the most up-to-date aspects for health, wellness, and air circulation and all those things.

After CRA left, the tower was occupied as swing space by other government agencies until recently.

“That’s what makes this unique. You don’t get that many buildings in downtown Vancouver that allow you an opportunity to take them down because you usually have a whole mixed bag of tenants to deal with long-term and nothing lines up,” Stovell said.

“There’s two types of things you can develop in downtown. One is a parking lot and the other is a building with a single tenant, which this was. And those are quite rare.”

Stovell said Hines was looking for a local partner to enter the Vancouver market. The distinctive Hariri Pontarini-designed 1166 West Pender building, with its rounded corners and extensive outdoor balcony spaces, fits the type of development Hines seeks for its portfolio.

“For Hines, being over and above the standard office building is definitely a target mandate,” Stovell said. “In looking at Vancouver and various opportunities I think they were very attracted to the architectural distinctness of this building.”

The partners are not releasing financial details about the development.

Hines’ senior managing director Syl Apps said there is much to like about the Vancouver market.

“We chose Vancouver for our latest Canadian project because we believe in its world-class economy and future, and this partnership was a natural fit because of Reliance Properties’ commendable track record in the city and our shared values,” Apps said in the announcement.

“The design of 1166 West Pender puts the health, safety and wellness of each of the building’s occupants at the forefront.”

Delivery is scheduled for late 2024 or early 2025. Stovell said while the project is being undertaken on spec – there is no committed anchor tenant – both he and Hines expect the market to return to pre-COVID-type fundamentals by that time.

“Hines has that long-term vision. You have to also realize these office projects, they are years in planning and years in construction. You are dealing essentially with a future market,” Stovell said, noting the office market had been “on fire” when COVID struck.

“In any economy, you typically see investors thinking ahead of the news and that’s what’s happening here.”

“Certainly COVID raised some questions about office, but I think those who are looking long-term, that are operating on a global scale, can fully see the writing on the wall. A lot of them are operating in markets that are starting to recover.

There are already signs of increasing office activity in Metro Vancouver.

“The announcement of the partnership between Reliance and Hines is the most significant office activity since COVID-19 started and it is a major boost in confidence.”

The tower will focus heavily on tenant experience. The third floor will consist of an innovative indoor and outdoor space with amenities including an employee lounge and collaboration area, a modular conference facility, a spa-quality fitness and wellness centre and best-in-market end-of-trip facilities.

Another focal point will be the tower’s uppermost floors. The design allows for the top nine levels to feature private outdoor terraces overlooking mountains, water and the city, further increasing new health, safety and wellness protocols.

The tower will target LEED, WELL and WiredScore certifications

“There are components of fortuitous outcomes with the design that we had with these very large outdoor decks, which used to be frowned on by office tenants and now are almost a mandate,” Stovell said.

“A third or more of the building has outdoor decks which can be private within that tenancy, so that in a way is a type of distancing.”

Building systems will circulate air on a floor-by-floor basis, with “very high filtration.” Other high-tech features are also being built in, “like being able to call the elevator from your phone, all touchless plumbing fixtures and doors, touchless entry.”

The completed project will be managed by Hines, which like Reliance has a history stretching back over 60 years. Hines has a presence in 225 cities in 25 countries and approximately $144.1 billion of AUM.

Since the launch of its Canadian operations in 2004, Hines has developed, acquired and/or managed over 13 million square feet of projects from office buildings to retail, residential and mixed-use developments. It has offices in Toronto, Calgary and Edmonton.