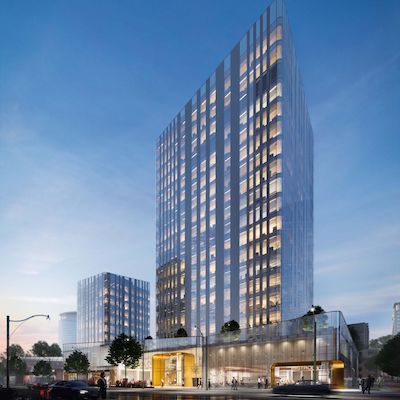 Capital Point in the Metro Vancouver City of Burnaby will be Slate Asset Management’s first office project in the region. (Courtesy Slate)

Slate Asset Management is set to officially launch its first Vancouver office building this spring, a strata renovation project for which the firm is betting on pent-up demand from both businesses and investors.

Brandon Donnelly, managing director at Slate, said the Toronto-based global asset manager had been looking for an opportunity in B.C. for a long time when it purchased a pair of office towers for $95 million in 2019. It is one of two recent property purchases in Metro Vancouver that mark the firm’s emergence into the market.

Once refurbished, the two towers will go from a dated set of government buildings to an updated and connected 220,000-square-foot, class-AAA strata office complex called Capital Point, in Burnaby’s dense Metrotown.

The firm had considered several options and decided prior to the pandemic the less common strata model would be the more desirable option for buyers looking to invest.

Donnelly says there’s strong demand for that type of product and pricing is competitive to comparables Slate found in the region, which are typically north of $2,000 per foot. The Seymour strata office tower downtown at 807 Seymour, due for occupancy in 2022, is an example of a higher-priced property, said Donnelly.

The 19-storey tower at 4330 Kingsway and the 10-storey tower at 5945 Kathleen Ave. are known for their gold-coloured exteriors, which will be re-skinned as part of the major update on the buildings.

They are within walking distance of the Patterson and Metrotown SkyTrain stations.

Pricing for Capital Point is around $1,000 to $1,400 per square foot and office sizes will range from 400 to 1,200 square feet. The average unit is a little less than 800 square feet. Slate is allowing buyers the flexibility of downsizing, such as buying a full floor initially and then selling off some of the floor space.

It has already sold some units and is having conversations with potential anchor tenants. Donnelly believes the strata office spaces will appeal to an investor market looking for a long-term asset.

“We think there will be investors that will want to buy strata units as an alternative to residential — and frankly, we think the returns will be better, to buy space and rent it out to a tenant. Office strata is relatively more common in many Asian cities and obviously there is that connection,” said Donnelly.

“We just felt there would be strong demand for people who’d rather own their space and use it or rent it out. We felt the market was looking for this kind of opportunity.”

Renovations to be complete in 2023

Office and retail have lagged industrial and residential since the pandemic broke out, but Donnelly said the fact they’ve already sold several units shows confidence in the office sector. He also said not all retail has suffered and there’s been some generalization around retail assets.

By the time the Capital Point project completes in early 2023, he expects businesses will be suffering from remote work fatigue. He said his own office in Toronto has faced challenges with employees working from home.

“We still believe fundamentally in office and we have a high degree of conviction around urban office,” said Donnelly. “We are finding that we are having to get creative as best we can in this environment. But morale, retention, productivity, collaboration, innovation, all these things are not as good when working remotely.

It took time to move into the B.C. market because Slate had been looking for an opportunity at the right price, said Donnelly. He said the property had been left mostly empty, as surplus government office space.

The majority of developers looking at it were considering it for residential conversion or redevelopment.

“When we were looking at some of the prices for land in the Vancouver area, it had been a nose bleed, and we are typically not the buyers who are willing to overpay for something like that. So this was an opportunity where there were a number of people looking at it and residential developers couldn’t get their heads around it.

“We looked at it from a different perspective, and we said, ‘There is an opportunity to reposition these existing two towers.’ The office strata market was strong and continues to be strong in our view. And so we were able to acquire these, based on that perspective.”

Other elements of the project 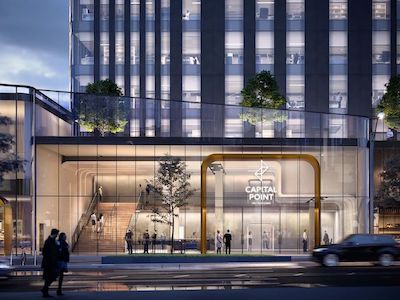 An artist’s rendering of the entrance podium to Capital Point, a two-tower office strata project by Slate Asset Management in Burnaby. (Courtesy Slate)

“This is something that we look for in all projects. We want walkable urban communities that are adjacent to transit and ultimately have these kinds of amenities that attract talent.”

Not all retail is created equal, he added. Slate Grocery REIT (SGR-UN-T) had a particularly good year, with grocery plazas in the U.S. performing well because of panicky buyers stocking up for essentials during the pandemic.

“It was like Christmas every day at the beginning of this pandemic, when people were buying food and stockpiling,” said Donnelly.

Because of that resiliency, the firm continues to invest heavily in grocery stores throughout the U.S. and Europe, where they see “huge value long-term.”

In Canada, Slate is focused on office and development projects like Capital Point.

“The vast majority of our portfolio was incredibly resilient throughout all this,” he said. “Certainly there was some slowdown as people adjusted to (the pandemic). But overall, it’s been very positive, and for our Slate Office REIT, which is across Canada and the U.S., where we have assets in Chicago and other U.S. markets, the rent collection was in the high 90s (per cent) throughout the worst of it.

“So our businesses did really well.”