The sale of a $45.5-million portfolio of multifamily properties by RAAMCO International, a compan... 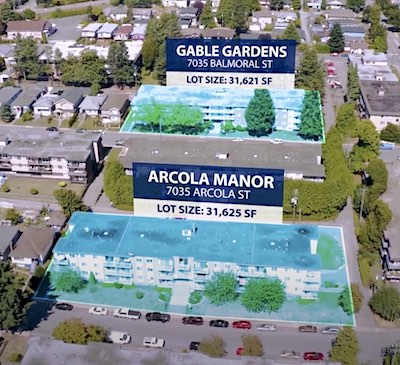 The sale of a $45.5-million portfolio of multifamily properties by RAAMCO International, a company with assets throughout North America, is one of Metro Vancouver’s largest recent transactions in the sector.

Avison Young marketed the four wood-frame, three-storey walk-ups in Burnaby and New Westminster to be sold as either a package or as individual properties. After receiving strong interest from institutional as well as private investors, the sale broke down into two transactions, said Avison Young commercial real estate principal Rob Greer.

Local company Belmont Properties purchased the Burnaby buildings at 7035 Balmoral St. and 7035 Arcola St. for $13.5 million apiece, with a cap rate of 2.7 per cent per building.

An unnamed local private investor scooped up the New Westminster properties at 409 Ash St. and 420 Seventh St. for $10.1 million and $8.375 million, respectively. The building on Seventh Street yielded a cap rate of 3.25 per cent and the Ash Street building 3.6 per cent.

Redevelopment potential at both sites

Both sets of buildings are in direct proximity to each other, on large lots with significant redevelopment potential, close to transit. They are squat 1970s apartment blocks with large frontages, which is difficult to find, Greer said.

Because they will require rezonings in order to increase density, the redevelopment potential is likely down the road, said Greer.

“They were very well received,” said Greer. “We had an even number of what I would call ‘institutional’ purchasers and private purchaser looking at them — so REITs, pension funds, groups like that were interested, as well as a lot of interest from private individual investors.

“What people like is it’s got scale. Each one of the buildings sat on a large piece of land and both are surrounded by high-rises, so there (have) been developments built in the last few years. People were drawn to the future redevelopment potential.

“This is what I would describe as more of a ‘buy and hold.’ In five or 10 years, I think the chances of getting more densities would be much higher.”

The seller, the Sheng family, started RAAMCO International with the purchase of a 93-unit building in Vancouver in 1983. RAAMCO has since grown its portfolio of apartment assets throughout North America, with the bulk of properties now in the U.S.

The firm made the decision to sell off some of its Canadian assets in 2020, said Greer.

In Montreal, RAAMCO sold a large portfolio of about 70 multifamily properties comprising 2,242 units for $300 million.

Greer said there are several reasons a large family-run company might want to sell some assets right now.

“These big groups are always re-evaluating their portfolios . . . I wouldn’t be surprised if there are other families out there that are looking to sell off some assets this year in this low-interest-rate environment,” said Greer.

“They have been very profitable and a lot of groups have five- or 10-year holds and we are reaching that time frame now, so we are starting to see more sales.”

Some other reasons for selling now include the potential of rising capital gains taxes in the future, which would take a hit out of profits. Interest rates will inevitably go up one day, which would bring values down. And older buildings will require an injection of capital.

As well, buyers are actively seeking out these properties.

Buyers are active partly because rent collection has remained high throughout the pandemic, at around 97 per cent in B.C., according to the Canada Mortgage Housing Corporation’s recent Rental Market Survey.

“I would say the even bigger reason is because of the available financing on those assets. We have never seen so much interest from institutions out of Toronto, looking at these kinds of assets.

“It’s not just in Burnaby and New Westminster and Vancouver, but also in areas like Kelowna and on Vancouver Island, in Victoria and Nanaimo. They are seeing a ton of interest from institutional purchasers.”

Rise in vacancy expected to be temporary

The CMHC survey, conducted in October, revealed an increase in the Metro Vancouver vacancy rate to 2.6 per cent — up from 1.1 per cent in 2019. However, while vacancy rates went up in Vancouver and Victoria, they fell in smaller markets such as Nanaimo and Kelowna.

Although the vacancy rate is up, Metro Vancouver had the highest rents in the province at just under $1,800 for a two-bedroom. Asking rents, however, remain significantly higher than in-place rents.

Compared to other major markets, rent arrears were low in Vancouver. The portion of units in arrears by the end of September 2020 in Vancouver was 2.6 per cent. In Calgary, that rate was 7.7 per cent and in Toronto the rate was 10.7 per cent, according to the survey.

Like many industry experts, Greer believes the higher vacancy rate is a temporary pandemic effect and once the borders re-open to immigration the rate will drop again.

Another advantage for developer-owners entering the market is that rents on new units are considerably higher than older units. In rental buildings built between July 2018 and July 2020 in the Vancouver region, rents were 45 per cent higher than in buildings of all other ages, according to the survey.

The general expectation is demand for residential properties of all types will only strengthen in 2021.

“I feel like as we get closer to herd vaccination each month, our market will be on a tear,” said Greer.

Tricon sells 80% stake in $1.33B US multifamily portfolio