“Beds and sheds” are the trends for recession-proof, long-term investment, according to a CBRE ex... 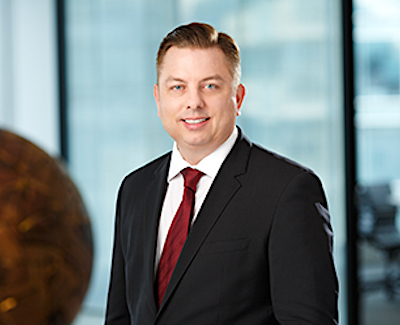 “Beds and sheds” are the trends for recession-proof, long-term investment, according to a CBRE executive who worked on the recent high-profile sale of 15 apartment buildings in Vancouver.

The mid-rise buildings are a unique grouping in that they are all within the city and they are well-managed and -maintained apartment blocks located in desirable neighbourhoods. Crestpoint Real Estate Investments and InterRent REIT purchased the portfolio in a $292.5-million acquisition.

The deal closed on Jan. 28 and only now has CBRE executive vice-president of the national apartment and investment properties group, Lance Coulson, been able to discuss it.

“I knew how unique this was,” said Coulson. “These buildings for the most part were high-end, the capital that had been put into them and the way they had been operated and maintained, it was top-notch. So whoever was going to end up with them, they were acquiring incredibly quality assets.

“We had interest from private investors, from institutions. It was a great mix. That’s something I thought would happen, when we did our initial marketing campaign, that we were going to get a large spectrum of different buyers interested — which was going to help with positioning of the assets, and also, at end of the day, getting the type of attention we needed to sell it and maximize value on behalf of our vendor.”

Coulson said the deal, one of only a few significant portfolio acquisitions he’s seen during the past decade, illustrates the demand from private and institutional investors, and the fact that prices are holding.

“I haven’t seen prices come down and I just proved it here,” said Coulson. “The appetite out there is really significant right now, and there is a lot of money out there, private and institutional. Interest rates are at historic lows. You can get 10-year CMHC financing right now for about 1.7 per cent — amazing.

“Given what’s happened in retail and office sectors, people are looking at multifamily and industrial. There’s a phrase right now that’s been coined: beds and sheds. From an investors’ perspective, those are the asset classes they are looking at . . . and we are going to get through COVID and you have to look long-term.”

He said the institutional investor who comes to the Vancouver region needs scale for operations and this portfolio gave InterRent, in particular, an opportunity to become established and gain a Vancouver platform. InterRent is new to the Vancouver market and has plans to manage the properties, of which nine are concrete.

Crestpoint, a private investment company, already has industrial, office and retail assets in the region.

“Overall, to accumulate anything like this, especially the concrete buildings, it could take you 40 years,” said Coulson. “That was the unique thing and why the end buyer was able to come here.

“They’ve always had an eye on Vancouver and they always wanted to be established here. An institutional investor can’t come here and buy one or two 30-unit buildings. It doesn’t make sense.” 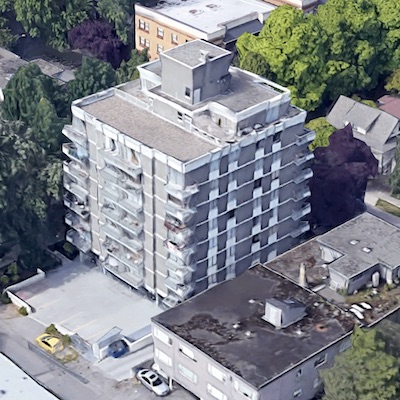 1580 Haro St., in Metro Vancouver was acquired by InterRent and Crestpoint as part of a portfolio of apartment properties in the city. (Google Maps)

The deal was also noteworthy because the apartments, 614 units in all, are in central and desirable Vancouver city neighbourhoods including Point Grey, the West End, South Granville and Marpole.

“I’ve been doing this 23 years now and the market has never seen that. That created a real buzz,” said Coulson. “In the last 10 years, including this one, there have been about six portfolio sales of any significant size in overall value. This is my fourth one and most of those have been wood frame, and they have been spread throughout Metro Vancouver.”

Mark Goodman, principal of Goodman Commercial, said it’s the dollar value that makes these portfolio purchases remarkable, not that the vendors are classified as institutional. Goodman tallied 12 months of comprehensive sales for 2020 and found that only nine per cent of transactions involved public companies, REITS, pension funds and other types of institutional investors, representing seven out of 78 transactions.

He did not include Hollyburn because it’s a family-run business.

Those institutional acquisitions, however, represented more than one-third of the dollar value, $394.940 million. That, he said, is significant.

“But the reason it skews upwards so much, from nine per cent of transactions to 35 per cent of volume, is because they are buying, in some cases, over $100-million deals.

“And they are often newer complexes being built,” said Goodman.

Prices are more nuanced according to submarkets, too, and only recently have they come up overall. Metro Vancouver as a whole has increased by eight per cent, he said.

However, a couple of major deals can also skew the numbers.

“Over the last few years, prices have come down. But if you look at the latest statistics — for example, if you look at average prices per unit, values have actually gone up this year across the board to $403,000 a unit,” said Goodman.

“I would say over the last 12 months prices have held steady.”

As for the Canada Mortgage and Housing Corporation report that recently showed a new vacancy rate of 2.6 per cent for the entire Vancouver region, neither Goodman nor Coulson believe it will have any impact on the market.

The vacancy rate is still low and the increase is likely an outlier in unprecedented times.

A CBRE survey found that on average 97 per cent of tenants in Canada paid their rent last year.

“People are looking at multifamily right now and seeing it was resilient, a defensive asset with good consistent cash flow,” said Coulson.