Nicola Wealth continues to expand in the Greater Victoria area with a recent rezoning application... 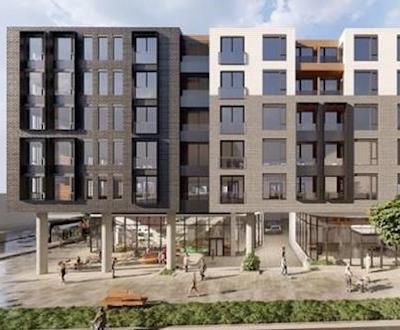 Nicola Wealth is proposing a 407-unit purpose-built rental project, which will include ground-floor retail, in the Greater Victoria District of Saanich. (Courtesy Nicola Wealth)

Nicola Wealth continues to expand in the Greater Victoria area with a recent rezoning application and proposal to develop 407 purpose-built rental units in the District of Saanich, aimed at the university town’s young demographic.

The two-acre site is at 1555-1595 McKenzie Ave., on a major transit route to the nearby University of Victoria, near shops and parks. The plan is to redevelop the site as a large, amenities-rich rental project offering micro-suites, three-bedrooms and townhouses, with 20,000 square feet of commercial space.

Nicola Wealth Real Estate is the in-house real estate division of the Vancouver-based financial planning and investment firm, which has $9 billion worth of assets under management in Canada and the U.S., and more than 200 staff.

Earlier this month, the firm acquired Toronto-based asset management company Blackwood Partners, which represents institutional investors. Together, Nicola Wealth and Blackwood announced their first purchase last week, a 105-acre plot of land in King township north of Toronto where they play to develop up to 1.7-million square feet of industrial/employment space.

Nicola Wealth, founded by John Nicola in 1994, stands apart from other Canadian investor groups in that it manages assets for high-net-worth families and individuals who privately own bricks-and-mortar real estate investments, through limited partnerships.

The firm’s strategy is to build rental properties to hold as long-term investments to meet their investment criteria, as opposed to merchant development, said Josh Anderson, Nicola Wealth’s director of development.

Because high demand for rental housing is expected to continue, the firm is more aggressively moving into multifamily.

“We are trying to grow the multifamily as part of the portfolio, especially as part of the Canadian income fund,” Anderson said. “In the post-pandemic world, multifamily is where we see safety in asset class. I wouldn’t say it’s a new thing — but it’s definitely something that has been reinforced here in the past year, absolutely.

“It’s a flight to safety, in some respects. It is, literally, the safest real estate investment you can think of, because people always need a roof over their heads.”

Anderson joined the firm a year ago after 20 years in the development industry, working with companies such as Westbank Corp. and Boffo Properties.

Vancouver Island markets are growing as people from the Lower Mainland and other provinces seek more affordable housing and the temperate climate. Victoria, which is also a government town, has experienced increased demand and a low vacancy rate.

However, like many area municipalities, the district of Saanich hasn’t seen new purpose-built rental in a couple of decades.

Nicola Wealth already owns around 1,100 rental units in the Victoria region so far, said Anderson. Other properties include The James at Harbour Towers, with 219 rental units in the James Bay neighbourhood, and plans for a 274-unit project in downtown Victoria.

The 407-unit Saanich project is a major undertaking, and as part of the long-term growth strategy, Nicola Wealth has been expanding the in-house development team, which is why Anderson was brought on board.

“Our funds have been getting so big in the past few years, in terms of the assets under management, there’s been a corporate decision here to control our destiny in certain respects in terms of how we look at projects,” he said. “So bringing the development function in-house — especially for assets we want to build on our own and hold in our own portfolio — it made perfect sense for us to internalize that development function.

“We have grown to a point where we are in-house experts on different components of the business,” said Anderson. “I’m the development guy, we have brought in more leasing expertise, to specifically help some of the asset managers on the leasing side.

“What I do here is very similar to what I did before, it’s just the breadth of the different types of assets I am developing that has grown.”

The company, he said, is on “a bit of a buying spree” in B.C. as it continues to acquire properties in an increasingly competitive environment. That said, there are still opportunities, and Nicola Wealth has the advantage of a long-established network.

Nicola Wealth holds properties in the Lower Mainland and on Vancouver Island, but also in Squamish and Kelowna, markets that have seen major growth in the last year.

As of November 2020, the company held 60 properties in B.C., and several are the result of development partnerships, such as the Lightworks Building in Mount Pleasant, built by PC Urban Properties.

The shift toward the residential rental market and away from condos could easily reverse, but that won’t deter the firm from its strategy, said Anderson. Nicola Wealth is a long-term investor, less concerned with smaller market shifts.

“It was so heavy one way for so long. If you look at the number of projects, especially if we’re talking Vancouver, on the multifamily, on the sales side, so much has been shelved to date in the past little while,” he said. “And so many developers have been shifting from developing a condo project to switch it over to rental in the past few years, just because the market has changed so quickly.

“Could it shift back? Oh absolutely. I think everyone is waiting for the day. But, time will tell what will happen in the next few years. I think it’s crystal-ball thinking when it comes to condo development in the next four to five years.

“We will see what happens with COVID and migration and immigration, but we are definitely still very comfortable into the future with the strength of the rental market and demand.”