Aragon Properties’ primary development focus has been on its hometown of Vancouver for 32 years,... 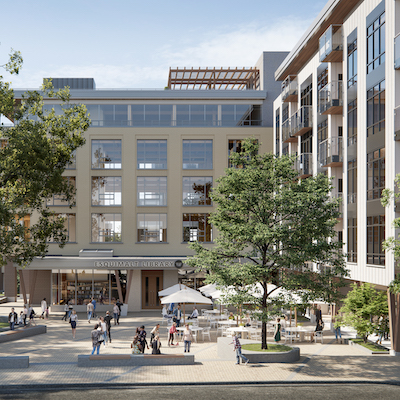 Aragon Properties’ primary development focus has been on its hometown of Vancouver for 32 years, but it has moved farther west with Esquimalt Town Square.

“We were looking at different municipalities and areas where we might want to expand,” Aragon development manager Luke Ramsay told RENX in a recent interview. “The Township of Esquimalt put out a request for proposals saying that it had land around city hall that wasn’t being used and they wanted a town square where people could gather.”

The township sought a residential component and a new library as part of the project, for which developers were asked to purchase the land as part of a joint venture, but there were no other specific mandates.

What Aragon came up with for Esquimalt Town Square, located a 10-minute drive from downtown Victoria, is:

* two six-storey wood-frame condominiums with a combined 68 one-, two- and three-bedroom suites averaging about 900 square feet;

* a six-storey mixed-use building with a restaurant/pub and a coffee shop at ground level, below 37 purpose-built rental apartments averaging about 750 square feet;

* The Mill, a six-storey, mixed-use mass timber building with a public library at ground level below five floors of office space averaging about 10,000 square feet apiece;

* a public plaza with outdoor space for community gatherings and events, as well as an “art walk” curated by local artists to help provide the feel of a traditional European town square.

One of the condo buildings is occupied, while people will start moving into the second next month. The two mixed-use buildings are targeting occupancy for next spring.

“Typically at Aragon, we do things differently than some other developers in that we try and sell from finished product,” said Ramsay.

“The reason for that is we put a lot of effort into building these homes of a really high quality and we feel that people appreciate it when they can walk in and see their finished unit. We compete against resale units instead of pre-sale units.”

Aragon originally thought there would be a municipal tenant for the office space, but that fell through and it’s looking for companies to occupy the space. Aragon is taking some of the space for its own office.

“Since it’s our first project on Vancouver Island, we really wanted to do a good job and we wanted to let people know that we’re sticking around for the long haul,” said Ramsay. “So we’re retaining the rental buildings, the commercial space and the office space, and we’re putting our own office there.

“We really have a stake in this for the long haul.”

Aragon has a number of other developments at various stages in British Columbia. 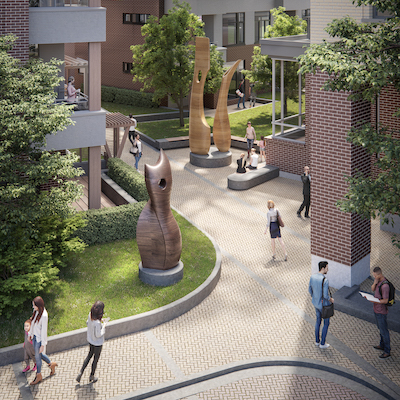 A view of an outdoor area at the Esquimalt Town Centre. (Courtesy Aragon Properties)

Hotel capacity will be doubled with the addition of a new wing. A spa, restaurant, banquet facility and wedding garden will also be added. The condo and hotel will share an underground parkade.

Aragon has a development permit and is building an on-site sales centre.

A six-storey, 104-unit condo and townhouse project called Platform is under construction in Port Moody.

Aragon has submitted a rezoning and development permit application and will have a public hearing in the late fall or early winter to determine if its proposed Cook Street Village mixed-use residential and commercial project in Victoria is approved as it stands.

It also has a site at 755 Cordova Bay Rd. in Cordova Bay that’s traditionally been a gravel pit, but which the company wants to transform into a low- to medium-density development.

“Cordova Bay is redoing their official community plan, so we’ve decided to put our site planning on hold until they’ve completed that so we can align our plans a little more closely,” said Ramsay.

There’s a 133-unit residential development in the works for a site that was formerly a farm in Sook.

Plans include: single-family homes on small lots with rear laneways for parking; townhouses in three-, four- and five-unit blocks; and a common amenity area that includes a rock-climbing wall, a pickle ball court and a dog park.

Another New Westminster project which will feature walls and floors built with cross-laminated timber and exposed wood is in the planning stages.

Aragon founder Lenny Moy was originally from Ontario before moving to Vancouver. The company has also developed a few projects where Moy has his roots.

Aragon’s completed condo developments in Toronto include the 86-unit Enigma Lofts and the 230-unit Showcase Lofts.

Eighty One Wellesley is a 28-storey, 179-unit condo, Aragon’s biggest Toronto project, located in the downtown Church and Wellesley neighbourhood. The development is sold-out and still relatively early in the stages of construction.

Multifamily: ‘Ton of product’ for sale in Metro Vancouver

Kerry Gold Commercial Market Trends Metro Vancouver Oct. 20 2020
Steve McLean Business reporter
Steve is a veteran writer, reporter, editor and communications specialist whose work has appeared in a wide variety of print and online outlets. He’s the author of the book Hot Canadian Bands and has taught reporting to college students. He is based in Toronto.