A $1-billion housing development to be built on decontaminated industrial sites in the historic Montreal borough of Lachine points the way forward for future urban developments, its developer says. 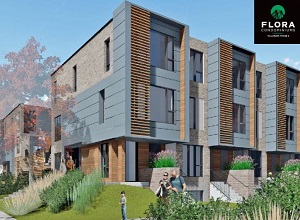 VillaNova is designed to create 4,000 housing units, ranging from townhouses and duplexes to multi-storey condo towers, during the next 10 years. It will be built on the sites of the former Jenkins Valves Factory and Dominion Bridge Factory, both of which are off the Lachine Canal.

Some 90,000 tons of soil have been removed from the former Jenkins factory site and infrastructure work has been completed. Decontamination at the former Dominion Bridge site continues.

Decontamination to be more prevalent

Decontamination of industrial sites is going to become increasingly prevalent in cities, says Didier Heckel, director of planning and building development at Les Développements Lachine Est, the developer of VillaNova.

“Many industrial sites are in the hearts of cities,” he says, noting the choice will need to be made to decontaminate them or allow for additional urban sprawl on fast-disappearing agricultural land near cities.

Going the decontamination route not only saves valuable agricultural land and avoids sprawl, but allows for the densification of areas near downtown and more efficient public transit, he says.

Construction on the 52-acre site is moving ahead almost two years later than originally intended, primarily due to problems with decontamination.

“VillaNova is essentially a do-over of post-industrial lands,” says Gino Mauri, senior design architect at Lemay Architecte, the architectural firm which designed VillaNova. “You rarely see this opportunity arrive so we’re going to make the most of it,” he says of the project’s proximity to downtown Montreal.

Planners went across Europe and the U.S. to see what’s being done and to not repeat mistakes of the past when it comes to recuperating former industrial sites on waterfronts.

Phase I construction in June

Construction of more than 100 duplexes, stacked condos and townhouses – Phase I – will begin in June.

Up to 15,000 square feet of rooftops and patio space in the development will be reserved for urban agriculture. Residents and Moretti, a restaurant which will open on the site, will have access to the produce that is grown.

Steps will be taken to ensure rainwater is used for green spaces and doesn’t go down the drain. The first five to 10 millimetres of rain which falls will be entirely absorbed by the land.

VillaNova-branded electric bicycles, which can hit speeds of 32.5 km/h, will be available for rental using a smartphone app. There will be 12 bikes from local firm iGo available and that number could rise substantially, depending on demand.

A yoga studio, indoor/outdoor gym and landscaped rooftop pool are among the amenities planned for the condos.

Units will have solarium style balconies (or loggias) and kitchens will feature Miele appliances, kitchen cabinets from Snaidero and marble countertops. “Even the smallest unit will get this treatment, which is exceptional,” Heckel says.

The development will have a number of two- and three-bedroom units to attract young families, Mauri says.

Construction of Phase I will take only 10 months and will be made quicker given the buildings will be partly pre-fabricated, Heckel says.

The Phase II Flora condos will use a novel construction system developed by the Montreal firm Upbrella.

“It’s basically a structural (lift) system that raises your roof as you go up,” instead of pouring slabs one floor at a time, Mauri says. The process allows tradespeople to start work earlier.

Heckel hopes to see construction of Flora begin at the end of August, with the first units delivered around October 2019. Forty of the 177 Flora units have been sold before sales officially began, leaving Heckel confident construction can begin soon.

Paolo Catania, one of the major shareholders of Les Développement Lachine Est, was one of several people acquitted in early May of charges of fraud, conspiracy and breach of trust related to a 2007 sale of city of Montreal-owned land known as Faubourg Contrecoeur at a discounted price.

He was president of Construction Frank Catania et Associés Inc., the firm that won the bid process for Contrecoeur land.