It took 12 years to assemble the land and go through the approvals process, but Intermarket Developments is ready to launch the 400-acre IP Park Industrial Campus in Cambridge, Ont. 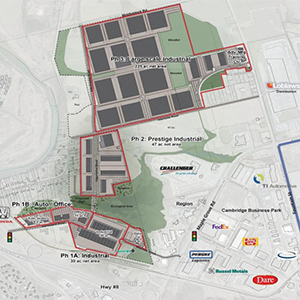 Intermarket Real Estate Group founder and president Mark Kindrachuk expects his Toronto-based development and management company and the City of Cambridge to start building roads for the site in the spring and for construction to begin on the first two phases of IP Park Industrial Campus next summer.

While Kindrachuk said there are a number of interested tenants, he doesn’t expect to announce any names until late this year or early 2019.

“I think we’ll have enough leases signed so we won’t have to go 100 per cent on spec, but if there’s a situation where we need to do that with one of the buildings we could look at that as well,” he said.

IP Park Industrial Campus will be located behind Maple Grove Road between Highway 8 and Fountain Street near Highway 401. It represents the most significant parcel of industrial development-ready land to become available within the last 10 years in Waterloo Region, where the vacancy rate for class-A industrial space is less than two per cent.

IP Park Industrial Campus is also attracting interest from potential tenants in markets including Milton and Mississauga who are looking to become more technology-driven, according to Kindrachuk.

“We typically partner with institutions, and that’s what we’ll likely do in this scenario,” Kindrachuk said of funding the costs of building IP Park Industrial Campus. “It will be in the hundreds of millions of dollars because it’s such a large project.”

Campus to be built in phases

The first phase of IP Park Industrial Campus will include an industrial campus with two mid-bay buildings encompassing approximately 550,000 square feet of space with flexible layouts and, possibly, cross-dock facilities. CBRE’s Waterloo Region office is the brokerage for this space, which Kindrachuk expects to attract tenants in the supply chain sector.

Land just west of that site, facing Highway 8, will include a small amount of office space and two auto dealerships. It should go up at the same time as the two other buildings. Cushman & Wakefield’s Waterloo Region office is responsible for finding tenants for this part of IP Park Industrial Campus.

There are seven small bay buildings, encompassing approximately 875,000 square feet and designed to suit advanced manufacturing, planned for the second phase of the campus. Kindrachuk said Colliers’ Waterloo Region office was chosen as the brokerage for this segment because “they have a very good track record with small prestige industrial users.”

The final phase of IP Park Industrial Campus will feature large-scale buildings to be used for e-commerce, logistics, supply-chain and other big box industrial uses. There are plans to integrate an advanced manufacturing training centre as well.

“We’ve been approached by different groups that want to showcase how you can take a typical manufacturing process and integrate technology, data, artificial intelligence and other things,” said Kindrachuk. “We think that’s going to be a really strong driver to attract companies to the area.”

Kindrachuk said CBRE’s Toronto West office will handle these larger building lease transactions because “they have lots of experience in e-commerce distribution.”

Rents will vary, depending on type of use and size of space, according to Kindrachuk.

IP Park Industrial Campus will focus on finding ways to conserve water and energy and minimize waste. Kindrachuk said a LEED certification will likely be targeted for the development’s small office component.

“What we find is that a lot of these companies have to hire engineers and people with technology backgrounds, and they have to compete against other employers,” said Kindrachuk. “So, we’re trying to have higher-end buildings, designs and green space so people can take a walk at lunch.

“They’re close to retail that they can walk to. We think that will be a big draw for some of these companies that can’t attract people to old industrial concrete shells. They’ve got to have state-of-the-art facilities and amenities.”

Intermarket developed the nearby Sportsworld Crossing, which includes restaurants and stores and will provide many of the amenities which Kindrachuk referred to. It also includes office space and a twin pad arena.

Intermarket’s other major development in Waterloo Region is the 40-acre Waterloo Corporate Campus at Northfield Drive and Weber Street North in Waterloo.

Intermarket was established in 1997. In addition to its development activities in Waterloo Region, the Greater Toronto Area and Niagara-on-the-Lake, it offers real estate advisory and consulting services and gives third parties an opportunity to invest in real estate.