Cushman & Wakefield has been hired by WeWork to help the co-working company lease its spaces in f... 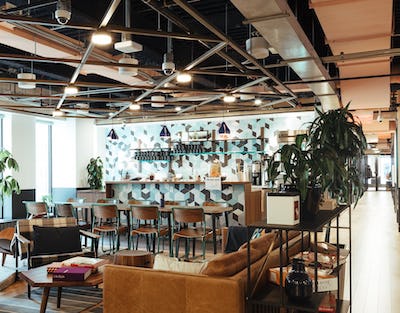 Cushman & Wakefield has been hired by WeWork to help the co-working company lease its spaces in four downtown Montreal properties, including Place Ville Marie.

“They felt by hiring a traditional broker that they would have better reach for tenants,” says Cushman & Wakefield executive vice-chairman Lloyd Cooper.

Many companies have not renewed their short-term leases during the pandemic, resulting in “significant” vacancies in WeWork’s various spaces, he says.

Cooper says WeWork is hiring brokers to list and market their spaces in selected markets, such as Austin, Texas, Washington, D.C., and New York City.

WeWork’s locations in Montreal are 2-3 Place Ville Marie, 1010 Sainte-Catherine St. W. (formerly known as the Dominion Square Building), L’Avenue at 1275 des Canadiens-de-Montréal Ave. and 455 Saint-Antoine St. W. The company has 294,983 square feet of rentable space in the city, with an average footprint of about 80,000 square feet at each location except for the smaller 455 Saint-Antoine site.

Cushman’s leasing effort for WeWork will be led by Cooper and executive vice-president Erik Langburt. WeWork has not let go of any of its existing leasing staff and Cushman will be working with them, Cooper says.

Cooper declined to provide WeWork vacancy rates in Montreal and did not comment on whether the company has reduced prices.

However, according to an analysis by Bloomberg News, WeWork has cut prices across the U.S. by an average 10 per cent in the past few months and by as much as 25 per cent in some locations.

In Austin, Washington and New York, cities in which Cooper says WeWork has hired outside brokers, WeWork has reduced its prices by 15 to 20 per cent, according to the Bloomberg report.

Far from abandoning its Montreal spaces, Cooper says WeWork is poised to do well post-pandemic with its flexible lease terms and furnished, turnkey workspaces.

“From a brokers’ point of view, this is a really forward-thinking idea for companies who aren’t sure how their spaces are going to look post-pandemic or as the economy recovers,” he says. “We feel it’s just something tenants are going to look at and be at peace in, in their occupancy puzzle.”

Tenants “are looking for flexibility. They can’t lock in because they don’t know what their footprint is going to be long-term and they’re reluctant to spend money building out spaces right now,” he says. “It’s a really good time to promote flexible co-working space.”

Cooper notes an advertising agency just leased 30,000 square feet (an entire floor) at WeWork’s 1010 Sainte-Catherine site, going from about 85,000 square feet of traditional office space with a long-term lease to about one-third that amount.

“They have the ability to get out every year. So while they’re trying to figure out how their business is going to look and how the economy is coming back, they’ve gone into a complete flexible situation.”

Cooper notes while Cushman’s own offices are closed, his team has been working out of WeWork offices. “We’re walking the walk.”

Clients can be shown seven or eight different workspace configurations in all WeWork locations in Montreal, he says. The spaces are “cool, funky, tech-looking spaces, very much in vogue with what tenants are looking for right now.”

He adds WeWork tenants also have the potential to put 200 employees in 100 seats, as some employees will be working from home.

“Companies are having the ability to put more people per seat in a WeWork location but not paying for all of those seats. We can negotiate more key cards per person.”

Cooper says Cushman is bullish about Montreal’s office space situation post-pandemic as the city has very little spec construction compared with Toronto. There is a large amount of sub-lease space on the market “but we see as we’re going to get into 2022 and 2023 we’re looking at a healthier recovery.”

“Companies put space up for sublease but as the market recovers, they may see the trend will be to come back to the office.

“We think a lot of that space will come off the sublease market as companies realize people really want to get back to their office.”

In 2019, a failed attempt at an IPO led to the ouster of WeWork co-founder Adam Neumann as CEO. The business subsequently received a bailout from its largest investor, Japan-based SoftBank Group.

Last month, SoftBank ended a legal dispute with Neumann in a settlement that cements the company’s control of WeWork and provides Neumann a financial windfall.

Steve McLean Commercial Proptech National Dec. 1 2020
D
Danny Kucharsky Business reporter
Danny is a multiple award-winning journalist based in Montreal, who has written for about 75 magazines and newspapers in Canada and the U.S. His credits include The Globe and Mail, Montreal Gazette, Maclean's, Chicago Tribune and a wide variety of business, specialized trade and medical magazines. Danny was also the Montreal correspondent for Marketing Magazine for several years.