Wexford Developments has closed on a 36,000-square-foot property near Victoria’s West Bay Marina... 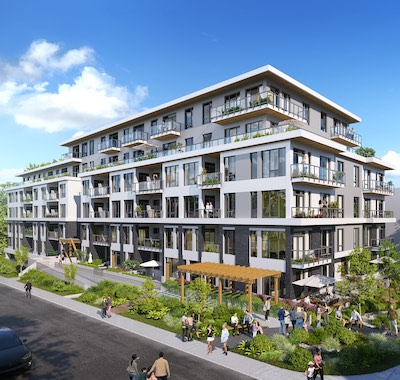 Wexford Developments is planning this 105-unit apartment project on a site it has just acquired in Esquimalt, in Greater Victoria. (Courtesy Wexford)

Wexford Developments has closed on a 36,000-square-foot property near Victoria’s West Bay Marina on which it proposes to construct a 105-unit mid-rise rental apartment building.

The site marks the Calgary firm’s entry into the Greater Victoria market, but it won’t be its last, principal and co-founder Kendal Harazny told RENX.

“When COVID hit, we knew Victoria would really explode, which it has, so we accelerated our search and found our first site,” Harazny said, noting Wexford had been seeking a potential site in the region for several years. “Now we have another site coming up in the City of Victoria.

“We’ve been really focused on the beauty of it and the in-migration. Tech firms are flocking there, there’s lots of employment and offices opening up, so we think there are big tailwinds ahead of us.”

Located at the intersection of West Bay Terrace and Dunsmuir Road in Esquimalt, the property comprises five current addresses (a total of 20 rental apartments) and is zoned for medium-density residential. It was acquired from a longtime, private owner. Financial details were not disclosed, but Harazny said the proposed development is about a $50-million project.

Wexford is already engaged in rezoning the site to allow its proposed development and if all goes well it hopes to start construction early in 2022.

“There is a lot of development happening, but there is not nearly enough development happening. Vacancy is zero,” Harazny said. “The largest property manager in Victoria, who manages I think 8,000 units, is opening some months with (only) 30 units available, there’s not enough housing right now.

“There are people with good jobs living in their cars, because they literally can’t find an apartment.”

Wexford has created a virtual open house for the project.

Known as the West Bay Terrace, the proposal is for a six-storey multifamily building with a mix of studio, one-, two- and three-bedroom units. Wexford is working with dHKarchitects and LADR Landscape Architects, as well as planning consultant TownSquare.

“First it’s important to note it is in the West Bay neighbourhood of Esquimalt, which is a very historic and beautiful neighbourhood in Esquimalt, on the ocean,” Harazny said. “We really elevated the architecture to meet the history and feeling of West Bay.

“This building will be architecturally beautiful compared to most rental buildings that are going up in the market today. That is something we care about a lot.”

The building is designed with a two-metre setback for the fifth and sixth levels to make them less visible from the street. The majority of three-bedroom family apartments will be on the ground floor with exterior access.

“The other thing that’s really unique about this building is we have a lot of family-friendly units. That is something the Township of Esquimalt has asked us to look at,” he explained.

“It’s something we proceeded with. Our entire main floor is three-bedroom walkup units, with large balconies where you can put private kids’ playgrounds or bikes or whatever you need.

“We have a lot of two-bedrooms, and even large one-bedrooms, that will be targeted toward starting families or families with one or two children. It’s a very family-focused building and it’s in a neighbourhood that’s in desperate need of this.”

The three-bedroom apartments will average about 1,050 square feet. Harazny said many bungalows in the area, built during the 1950s, range from 900 to 1,100 square feet so the size of available space is comparable to these existing properties.

“We’re pretty pleased we are not cramming families into 800-square-foot units.”

The two-bedroom units average about 900 square feet, with one-bedrooms at about 575 square feet and studios being constructed to utilize smaller chunks of “filler space” in the design.

Finally, the sixth level features both apartments and a large outdoor amenity area comprising about half the square footage.

“Instead of doing penthouse units which would be used by a few, we’ve made an indoor and outdoor rooftop space overlooking the ocean on the top floor that will be an amenity for all of the tenants,” Harazny said.

“It’s probably a different route from the norm, but we felt that was a pretty special view that often people have to pay $5 million to buy a condo to get.”

The neighbourhood offers several nearby transit stops, as well as access to the marina, Songhees Walkway along the waterfront, parks and retail shops along Esquimalt Road within a five-minute walk.

Harazny told RENX Wexford is already working on a second urban infill project on a 100,000-square-foot site in Victoria and has plans to acquire other sites in the metro area for future developments.

“Our target growth goal for Victoria is to find another five development sites for our pipeline. We’d like to establish a strong rental portfolio in the Greater Victoria area and probably further up the island as time moves on,” he said, noting the company has strengthened its commitment to its existing urban infill strategy.

Wexford has just wrapped up The Shore, a six-storey mixed-use rental apartment project in Kelowna which also includes retail and office space on the first two floors in partnership with local firm Rise Commercial Developments.

The two partners also have a second project planned for the city’s downtown, featuring about 330 apartments.

Arizona is another active market for Wexford, which has projects under development in both Tempe (the site of Arizona State University) and Phoenix.

“We are hyper-focused on our urban infill mixed-use and multifamily rental projects and we will continue growing in other cities,” Harazny said.

Founded in 2014, Wexford Developments is a real estate investment, development, and management company with over $500 million of assets under management. Based in Calgary, it also has offices in West Palm Beach, Fla., and New York City.