Globe Property Management’s $60-million purchase of a multifamily apartment in an up-and-coming M... 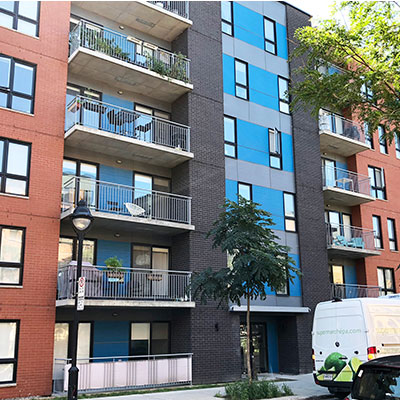 Globe Property Management’s $60-million purchase of a multifamily apartment in an up-and-coming Montreal neighbourhood may have seemed to come out of nowhere.

However, the Winnipeg-based firm has long had its eye on one of Canada’s hottest real estate markets.

“Most of our growth over the past 15 years has been in Montreal and Ottawa,” says Richard Morantz, CEO and president of Globe Property Management.

And the company with more than 7,200 suites in Manitoba, Saskatchewan, Alberta, Ontario and Quebec — and assets worth about $1.5 billion — continues to see upside in the city.

“Montreal is just a great city and has so much to offer,” says Morantz.

The $60-million acquisition of the 168-unit apartment, built about six years ago, is the largest investment ever by the family business, wholly owned by Morantz.

“This building is on the Lachine Canal with bike paths on both sides,” he says about the property located in St. Henri.

“It was an industrial area and the government has cleaned it up.”

Rents can be increased

About 10 minutes’ drive to the west of Old Montreal, the apartment complex requires little upgrading, a departure for Globe.

In the past, the firm looked for “under-managed” properties that could be upgraded, allowing for gradual rent increases, he says.

“But the property we just bought – there’s no money to spend there,” Morantz says. “We just think the vendor we bought it from was not as aggressive as it could have been increasing rents.”

The building does not warrant rents at that price, Morantz adds.

“We do things incrementally so we can look back in five years where we have increased the rents to an average of $2 per square foot.”

Buying low and holding for the long term has long been a key page of Globe’s playbook. The company was founded by Morantz’s grandfather in the 1920s as an accounting and insurance firm.

It then switched to property investment after the Second World War. Morantz’s father took over the business in the 1960s, with Morantz joining the firm in the ’80s.

For decades, commercial real estate had a “mom-and-pop” feel to it, but that changed in the 1990s with the growth of REITs, he says.

So when Morantz took ownership of Globe in the 1990s, the firm was going against the current in some ways, growing as a privately held family business.

Over the last 20 years, however, its focus on buying undervalued residential concrete high-rise rentals has proved to be fruitful, especially today.

Current trends point to growing rental demand as boomers downsize and rent instead of buying a condominium.

“Certainly many millennials at this point anyways don’t see owning a home as important as previous generations,” he says.

Morantz notes the sector’s performance has attracted plenty of investor eyes, including new builds. The recent Montreal purchase illustrates how Globe is adjusting to market conditions, focusing on newer properties with more amenities, including in-suite washer-dryers.

“Upgrading, modernizing and keeping pace with the trends — that’s not unlike any other business.”

That trend should continue. Morantz notes Globe could manage as many as 10,000 units within a few years.

Despite its growth arc, he says the firm has no plans to restructure.

“There are companies at this stage of the game looking to convert to a REIT,” Morantz says. “For the time being, that’s just not on my radar.”