With the momentum of quickly selling out its 8 Wellesley Residences behind it, CentreCourt is loo... 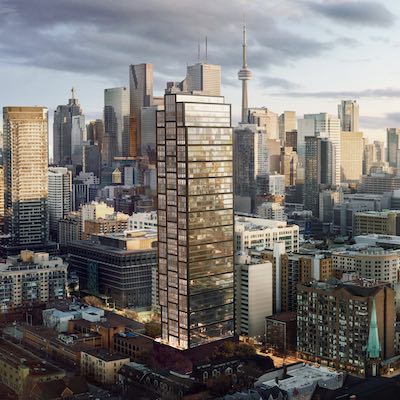 Toronto’s CentreCourt plans to launch sales for Prime Condos early in the spring of 2021. (Courtesy CentreCourt)

With the momentum of quickly selling out its 8 Wellesley Residences behind it, CentreCourt is looking toward the launch of its Prime Condos early this spring.

“This was beyond our best-case scenario,” CentreCourt associate vice-president Jacob Truglia told RENX during an interview. “We had enough confidence to know we could sell at least 50 per cent in a relatively quick time, but the biggest concern for us was the depth of the market. Over the past 12 months, we’ve seen AAA location, higher-end product take a beating in popularity.”

Truglia said the development’s location at Yonge and Wellesley Streets is the best CentreCourt has brought to the market in its 11-year history.

“Doing a launch and selling half-a-billion dollars worth of product within a week was an amazing realization that the market sentiment right now is completely on the trajectory of a robust recovery,” CentreCourt VP Gavin Cheung said during the interview. “We were excited by that for what that means for the pipeline not only for us, but for our industry.”

Marketing began in October for 8 Wellesley and 95 per cent of it was done online. CentreCourt has also developed a sales application through Salesforce Truglia said enables it to launch high-volume projects in an efficient fashion so everything can be done virtually and deals can be processed more quickly than the old paper methods.

Concord, Ont.-based BAZIS is a partner in the IBI Group-designed project, as it owned one of the parcels in the land assembly, but Truglia said CentreCourt is the primary driver behind 8 Wellesley.

Cheung said the pricing gap between a condo unit and a detached house in the Greater Toronto Area is the largest ever and has almost doubled in a year, as the price of detached homes has increased more rapidly than condo units.

“That’s a positive indicator for a good market that’s coming up, because that sort of price gap is not sustainable. We tend to see convergence, where either condo pricing goes up or housing prices come down. We’re very optimistic that there are reasons why condo pricing should go up.”

Prime Condos to launch this spring

That optimism is behind CentreCourt’s plan to soon announce the sales launch for Prime Condos, in conjunction with Toronto-based Centrestone Urban Developments Inc.

Zoning and approvals were completed and the project has been ready to go for a while, but CentreCourt didn’t think the downtown Toronto market was ready for two major condo launches so close together . . . until now. With the success of 8 Wellesley, it’s accelerating its plans for Prime’s launch.

The 46-storey, 595-unit Prime site is at 319 Jarvis St., in the heart of Ryerson University’s campus area and close to the College and Dundas subway stations and streetcar lines.

The site is within walking distance of employment opportunities, attractions, entertainment, retail, restaurants and hospitals.

“Prime is situated in one of the last great locations in the downtown core,” said Cheung, who called Ryerson “one of the hidden demand drivers of this entire neighbourhood.”

Ryerson has been growing and continues to grow, but its construction focus has been on academic buildings and not student housing. This has resulted in a large imbalance of supply and demand in the area.

Cheung said Prime will offer highly efficient and affordable units and an amenity package that includes a 6,500-square-foot gym and co-working space with private work pods and open areas.

“We know, and can say with confidence, that there’s going to be rich demand for these units. And for people who view it as an investment, there’s going to be a rich pool of renters in the form of students and young entrepreneurs who will constantly want to come into this project.”

Other CentreCourt developments in Toronto

CentreCourt and Parallax are partners on the 39-storey, 484-unit 199 Church Condos, which launched sales last July and has fewer than 10 per cent of its units still available. Construction is anticipated to start in May.

The 14-storey, 350-unit Forest Hill Condominiums project at 859 Eglinton Ave. W. near Bathurst Street is in the early days of construction. It will feature: a 24-hour concierge; co-working space; a roof deck; a gym; a yoga room; and a party room.

CentreCourt is a partner with Fitzrovia Real Estate Inc. on two mixed-use, purpose-built apartment projects for which Fitzrovia has the lead in terms of day-to-day operations:

– The Brixton, a 32-storey, 397-unit building at Dufferin and Queen Streets with 60,000 square feet of commercial space and underground parking;

– and the 25-storey, 440-unit Liberty House, at 39 E. Liberty St. at the corner of Strachan Avenue, which will have integrated retail on the ground floor.

Initial occupancies will start in April at The Brixton, while Liberty House is on schedule for an October delivery.

CentreCourt and SmartCentres are partners on the Transit City condo towers that are part of the SmartVMC development in Vaughan.

The mixed-use, master-planned community will offer residents a variety of public transit options, retail, office space, a YMCA, a library, a nine-acre park and other conveniences upon completion.

“By the time TC4 and TC5 are actually built, it’s going to be even more exciting than it is today,” said Cheung of SmartVMC.

“We’re committing hundreds of millions of dollars, we’re hiring and we’re taking a very positive and bullish stand on where the market is and putting real dollars in play in support of it,” Cheung said of Toronto.

“We expect to be very active in terms of acquiring new land. We’re well-positioned to do that as a company.

Steve McLean Commercial Development National Feb. 22 2021
Steve McLean Business reporter
Steve is a veteran writer, reporter, editor and communications specialist whose work has appeared in a wide variety of print and online outlets. He’s the author of the book Hot Canadian Bands and has taught reporting to college students. He is based in Toronto.