Zibi a $1.5B development in the heart of Ottawa, Gatineau

Zibi is a four-million-square-foot, $1.5-billion, mixed-use development which will take another d...

Zibi is a four-million-square-foot, $1.5-billion, mixed-use development which will take another decade to complete. But to Jeff Westeinde, it is more than statistics, Zibi brings Ottawa and Gatineau full circle, reimagining and redeveloping the historical heart of the two cities. 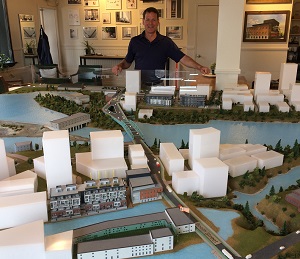 Jeff Westeinde, president of Theia Partners, stands with a 3D model of the Zibi development in Ottawa and Gatineau. (Don Wilcox RENX)

The 37-acre Zibi site straddles the Ottawa River in  Ontario and Quebec, smack dab in the middle of Canada’s National Capital Region. It comprises a large swathe of the Gatineau waterfront, as well as the Chaudiere and Albert islands in Ottawa.

This is Part I of a two-part feature on the Zibi development. Watch for Part II on Tuesday, Sept. 11.

To say the project is complicated is an understatement.

“Remember me with hair, because I might not have any (when this is done),” Westeinde jokes during an extensive interview with RENX at Zibi’s visitor centre on Albert Island. He calls it “hands down” the most complex development he’s been a part of.

Westeinde deals with the provinces, the cities of Ottawa and Gatineau, federal government agencies and the indigenous Algonquin-Anishinabe people, who have historical ties to the land. Fourteen governments or regulatory bodies, many with differing regulations, goals and viewpoints, have been involved.

Five years from concept to construction

Despite the challenges, Zibi is proceeding amazingly quickly.

“I’ve given this a lot of thought,” he says when asked how Zibi has moved from concept to property purchase, to approvals, brownfields remediation and construction in about five years.

“I actually think we’ve benefited from two things. One is the complexity of it. Because it is so complex, you need to get senior leadership of all of the various organizations involved.”

The second is that it’s a “world-class piece of property, it is literally where Canada’s three founding nations met.” Indeed, the first English and French settlers in the region began building here early in the 1800s (the name Zibi means “river” in Algonquin, honouring indigenous people who lived in the area for centuries).

“The fact we had this complexity, and this world-class vision allowed us to challenge all of the authorities to say if we want something world-class, that means different. If it’s not different, then it’s the same,” Westeinde says.

Zibi’s developers needed, and have had, access to mayors and senior managers who could help move the process along. It has been far from easy, and issues still arise, but Theia and Dream have created a plan which includes up to 42 buildings, public parks and squares, a district energy system, an inter-provincial transit plan and a strong focus on sustainability.

As just one example of a planning hurdle which needed to be overcome, Westeinde cited “woonerf” street designs. Pioneered in Europe, woonerfs strip away many of the conventional design elements which separate pedestrians, cyclists and vehicles. Municipal planning guidelines prohibit this, but Zibi promotes sustainability and transit-oriented design, and was able to negotiate an exemption.

“I give the political and senior management leadership of all of those authorities huge kudos for having the faith and trust in us to endorse what we are doing and authorize their bureaucrats to make it happen.

“That’s what I would credit with how we got where we did so fast.”

The result is that by July, construction had begun on Phase 1 in both provinces. The first buildings will be mixed-use condos in both Ontario and Quebec, with ground-floor retail in both, as well as commercial/office space in several redeveloped historical buildings and two public squares facing each other across the river.

Occupancy is to begin as early as this fall at “O” in Gatineau, and in 2019 at Kanaal in Ottawa.

Public events spaces in both provinces have already hosted activities including Cirque du Soliel, EcoSphere, and Ottawa’s Latin Sparks Festival. Westeinde said more than 200,000 people have been on-site for these events.

Other work on the site includes demolition of some of the existing industrial structures, including a large former Domtar mill building which for decades obscured Gatineau’s waterfront view.

An on-site quarry operation has been set up to crush rock for the project – and outside uses. Although quarrying is expressly prohibited in a city core, Westeinde said the impact of trucking 10s of thousands of tonnes of bedrock offsite, then bringing it back to use in construction, made a compelling case for an exemption from the cities.

“We did the greenhouse gas calculations of all that trucking and we said it makes no sense,” Westeinde says. There are also significant concerns in Ottawa about existing truck traffic rumbling through the downtown core, without adding more large dump trucks into the mix.

Remediation of the brownfields areas is ongoing, though Westeinde said most of the contamination is “low-level.” Zibi negotiated millions in government funding to pay for up to half the costs.

Though it will be done in several stages, most of the Quebec property has already been cleaned up.

“We wanted to make sure we had sufficient remediated area that, if any end user comes along, we have options for them, options we can move quickly on,” he explains.

Getting the infrastructure into place has also been a priority, for similar reasons. About half of the Quebec site is now serviced and work is underway in earnest in Ontario.

Development is further advanced at the Quebec property because Zibi’s owners closed the sale of that land first, purchasing the Ontario portion in two later tranches following appeals to the Ontario Municipal Board by project critics.

“We wanted a plug-and-play system for the vertical development,” Westeinde says of the infrastructure. “So, if we have an office user come along and say, ‘We need 200,000 square feet,’ good, we are ready, we can plug it in.

“That was one of the changes we made from our initial thinking. We were going to put in as much infrastructure as we needed for our first phase. We’ve now said, ‘No, put all of the infrastructure into the ground and then we have ultimate flexibility.’ ”

PART II: More details on the development plans, and the Theia / Dream relationship.