Zibi building a ‘there there’ in Ottawa, Gatineau

It will take a decade to build-out Ottawa and Gatineau’s massive mixed-use Zibi site, but its dev...

It will take a decade to build-out Ottawa and Gatineau’s massive mixed-use Zibi site, but its developers are already building a live-work-play downtown community. 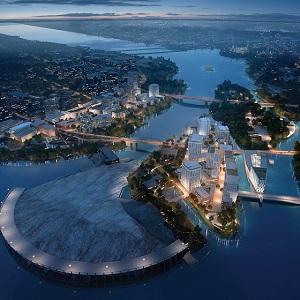 With Phase 1 under construction, Zibi president Jeff Westeinde says there will be homes, retail/professionals, entertainment, offices, public spaces and hotels in place on the 37-acre property within a couple of years.

“Phase 1 is much more than just condos,” he told RENX. “What you’ll see in Quebec and in Ontario is, we want to create a ‘there there’.

* Part II of a two-part feature. Click the link to read Zibi a $1.5B development in the heart of Ottawa, Gatineau

The “O” condominiums in Gatineau will be ready for occupancy late this year, followed in 2019 by the Kanaal residences in Ottawa. Both six-storey buildings also contain a mix of retail, food/dining and commercial space on their lower floors, adjacent to two of the site’s three public squares (Head Street Square in Ontario, Zibi Square in Gatineau).

The combined 141 units (70 in “O” and 71 in Kanaal) represent just a symbolic drop in the bucket when you consider more than 4,000 people are ultimately projected to live at Zibi. Thousands more will work there.

“In both Gatineau and Ottawa, there are none of our buildings that we can’t change uses on. This building could be commercial, it could be residential, so we really have the flexibility to do what we want,” Westeinde explains.

“We’ve modelled this out to be 50 to 60 per cent residential-type uses — that means condos, rentals, seniors’ homes, hotels, those types of things — with the balance being a mix of commercial office space, retail and institutional.”

Zibi is already adjusting its plans for the Gatineau shoreline.

“In Gatineau, when we first started looking at this project we would’ve said we need a very heavy residential component,” Westeinde says, “because in the downtown core there was not a lot of high-density residential.

“Since we started the project, there has been no fewer than eight or nine residential projects go onto the island of Hull.”

On the subject of office space, Westeinde sees a mix of both public and private sector tenants, considering the region hosts both the federal government and a growing hi-tech office market.

“There are some large, blue-chip tenants who are looking for that signature office space. And quite frankly an office tower in the downtown core . . . with no views of the water, no views of our national symbols, it’s tough to compete against our site,” he says.

“We have unparalleled views of Parliament Hill, the Supreme Court, sunset down the river. So, if you think about an office and your boardroom and you are Skype-ing to wherever and you’ve got the Peace Tower in the background, that is a pretty signature view.”

The other attraction, he explains, will be the leasing rates.

“We can build and lease at market price. There is not a premium to be here versus downtown so we think that is quite important.”

Ottawa’s downtown office vacancy rate dropped sharply from 10 per cent to 7.4 per cent year-over-year, according to Colliers’ Q2 report. Combine that with major modernizations planned for large government office complexes such as Terrases de la Chaudiere and Place du Portage in Gatineau, and Zibi would seem well-positioned to capitalize.

“They need swing space, but it’s like permanent swing space. So, I would expect to see a large government user on the site,” Westeinde said. Momentum has also been building from potential private-sector tenants.

“Over the course of the last 18 months, we’ve had a tremendous amount of interest from private-sector users, in the hundreds of thousands of square feet.”

In Phase 1, most of the office space is best-suited to smaller or mid-sized tenants. It will be concentrated in redeveloped “red brick, post-and-beam type of buildings” or mixed-use buildings.

Westeinde says Zibi hopes to become home to two hotels, one in each province, because “the region is under-hotelled.”

Westeinde is a passionate advocate for sustainability, and that concept runs through every facet of the project.

From crushing bedrock onsite to create raw materials for the projects (reducing GHG emissions by cutting out thousands of truckloads of cargo to and from a quarry site), to redesigning roads for better transit, cycling and walkability, to a zero carbon district energy system, the developers are considering every possible means to reduce environmental impact.

The district energy system will be created through a partnership with Hydro Ottawa, and an organization representing the indigenous Algonquins will also own a stake.

Westeinde called Hydro Ottawa “very forward thinking” in the field; it also owns the seven hydro-electric generators on the site at the Chaudiere Dam.

When Zibi was first conceived, it was strictly a project of Windmill Developments, but that soon changed.

“At a very early stage, we recognized that for a project of this size we are going to want an institutional-level partner,” Westeinde said. “With some of the work Dream has done, some of the more high-profile ones being Distillery District and Canary District (in Toronto), they are very similar to the vision we have for this.”

As they developed a relationship with Dream president and CEO Michael Cooper, whom Westeinde called “one of Canada’s most brilliant real estate guys,” the partnership emerged.

Dream bought in as a 50 per cent equity partner. More recently, that has evolved to 80 per cent Dream, 20 per cent Theia (which grew out of Windmill as a partnership to manage Zibi). Increased investment by Dream has allowed construction of both the infrastructure and the buildings to occur simultaneously.

“We’re going to create a very special community. We’re going to be part of One Planet which is an environmental sustainability process and we’re working towards creating a vibrant, exciting, very sustainable community that includes office buildings, hotels, residential, retail.”

With its approvals and partnership in place, financing arranged and design and construction partners working on site, Zibi is moving full steam ahead.

“All of the technical hurdles and legal hurdles are cleared,” Westeinde says. “Now we say it’s an easy project, we just have to put up four million square feet of market product.”