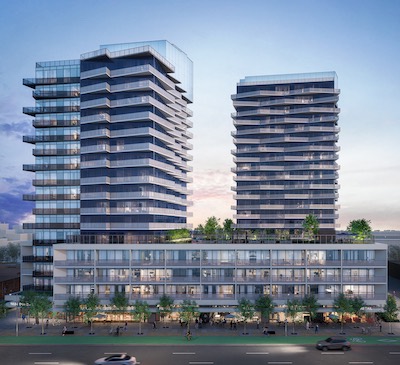 An artist’s conception of the Ahmed Group’s two-tower proposed development at 1000 and 1024 Dundas St. E. in Mississauga. (Courtesy Ahmed Group)

Ahmed Group of Companies, a family-owned real estate investment firm, has launched its latest proposal for a purpose-built rental development in Mississauga as the company continues to expand its reach in the multiresidential market.

President and CEO Moe Ahmed told RENX there will be more to come.

The proposed development at 1000 and 1024 Dundas St. E. would include towers of 16 and 20 storeys over a four-storey podium that would bring a total of 462 rental units to the market.

Ahmed said the Region of Peel, and much of Ontario, is in the midst of a housing supply crisis. He said Canada needs 5.8 million new homes by 2030 to tackle the situation and the majority of the supply gap is found in Ontario.

“We hope that our project will (help) address the housing crisis by delivering essential rental housing to the residents of the City of Mississauga,” said Ahmed.

“Few places have been more impacted by the housing crisis in this country than the City of Mississauga. We’re looking at a shortage of 200,000 rental units over the next decade, according to the Federation of Rental-Housing Providers of Ontario.

“Mississauga is a rapidly growing city, home to more than 700,000 residents, many businesses, the airport, post-secondary institutions and many more. A lot of people around the country don’t know about Mississauga. Similarly to us, it’s flown below the radar.

Ahmed wants to break ground in 2024

Ahmed said the company intends to break ground on the project in 2024 and anticipates having occupancy ready for residents in late 2026.

Once completed, the transit-oriented, mixed-use development will feature one-, two- and three-bedroom apartments, green space, improvements to the public realm, community space and an urban farm.

The development, designed by WZMH Architects, is envisioned as a walkable community with a pedestrian-focused experience. It will also offer ground-level commercial space for retail and office use to support current and future businesses in the area.

Landscape architecture has been designed by the IBI Group Landscape Division.

The four levels of government have invested about $675 million to support transit initiatives in Mississauga. A new bus rapid transit system would create a new, stronger connection to Toronto.

“We have a BRT station right at the intersection (of the proposed rental development) on both sides of it. We think it’s a fantastic location, a very promising location and a location that’s going to be gentrified very quickly.”

The Ahmed Group of Companies’ primary objective is to invest in the development and construction of Canadian real estate. The group consists of three primary subsidiaries: Ahmed Holdings, Ahmed Developments and Ahmed Asset Management.

The development arm of Ahmed Group has a pipeline of over $1 billion in completed value and the asset management arm has nearly $60 million in assets under management.

The Ahmed Group is involved in the development of over 1.5 million square feet of new purpose-built rental construction across Ontario.

“We have three main businesses. We have a real estate development business, we have an asset management business and we also have a holding company where we manage our own properties, our own portfolio,” said Ahmed.

The group traces its origins back to 1966 in Edmonton when the late Dr. Hashim M. Ahmed put down roots and  established his real estate investment business. Originally from Hyderabad, India, Dr. Ahmed was among the first Hyderabadis to migrate to Canada in the early ’60s.

The Ahmed Group also has additional projects at various planning and proposal stages in the Queen and Main, Dundas and Confederation, and Mississauga Road and QEW areas of the city.

Developments to focus on purpose-built rental

“As city builders, we have a corporate social responsibility to help create more attainable rental housing options and contribute to the revitalization of neighbourhoods,” Ahmed said.

“Healthy, transit-oriented communities are an essential tool in building a thriving Mississauga. We take pride in our responsibility of developing new rental units that will enrich the lives of people in the community.”

He said more details about those projects will be coming in the near future.

“One is very large and it’s also along the Dundas corridor. We are a very adamant supporter of the intensification of the corridor. But we do have other projects in the city,” he said, adding the company would be developing more than 1,000 rental units.

“The projects will be geared toward the purpose-built rental market . . . Mississauga needs these projects. There’s a housing crisis. We need to be building more.”

In a recent press release, several businesses and landowners from the Dundas Street corridor, including the Ahmed Group, announced they were pleased by Peel Region Council’s July 7 decision to remove the lands south of Dundas Street East from Employment Areas and allow for residential mixed-use developments.

Don Wilcox Commercial Transactions Toronto / GTA Jun. 29 2022
M
Mario Toneguzzi Business reporter
Mario Toneguzzi, based in Calgary has 37 years of experience as a daily newspaper writer, columnist and editor. He worked for 35 years at the Calgary Herald covering sports, crime, politics, health, city and breaking news, and business. For 12 years as a business writer, his main beats were commercial and residential real estate, retail, small business and general economic news. He nows works on his own as a freelance writer and consultant in communications and media relations/training.