Creekside Lands, a 22-acre infill development site in Mississauga, is being marketed for a variet... 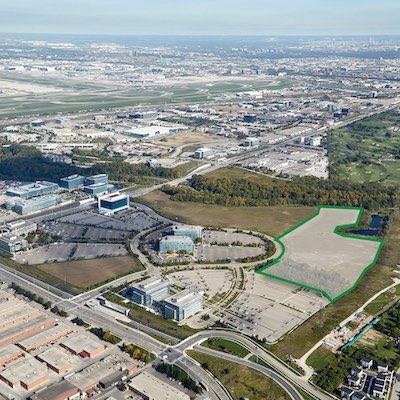 Creekside Lands, a 22-acre infill development site in Mississauga, is being marketed for a variety of uses by TD Cornerstone Commercial Realty Inc.

The balance of the property is a wood lot designated as a G2 Greenland Zone that’s excluded from the proposed developable area.

“Truscan was the development arm of the bank way back 20-plus years ago and this whole parcel was acquired at the time to build corporate offices for the bank, which were built and sold on a sale-leaseback basis,” he said. “These are out-parcels that are there and needed some sort of monetization.”

Two buildings could be supported on-site

Hopewell Development was enlisted by the vendor to provide a due diligence and development feasibility investigation for the site.

It was concluded it could support approximately 277,000 square feet of gross floor area across two light industrial buildings that maximize coverage, while respecting the site’s configuration and required setbacks, assuming a conservative 16.4 acres of net developable land.

Creekside Lands is located along Tahoe Boulevard south of Eglinton Avenue in the southwest quadrant of Mississauga’s Airport Corporate Centre district. They’re also in the greater “Airport Mega Zone,” which forms the second-largest employment concentration in Canada after Toronto’s downtown core, with more than 300,000 workers.

Restaurants, hotel and conference facilities, and entertainment options are all within a short drive. The Greater Toronto Airports Authority estimates the area could ultimately provide 700,000 jobs and generate 8.5 per cent of the province’s gross domestic product.

While most of Mississauga’s life sciences activity is concentrated in what’s called “Pill Hill” in the Meadowvale neighbourhood, Martis said Creekside Lands offers a prime location for companies in the field due to accessibility and because they’re already zoned for that usage.

The City of Mississauga‘s Economic Development Office developed a five-year life sciences cluster strategy focused on establishing a world-class hub in Mississauga in 2017. It’s the only Canadian municipality to have such a strategy.

Mississauga has become the second-largest life sciences destination in Canada, in part due to its dedicated business network, partnerships with educational institutions and access to funding.

Given the city’s established ecosystem and the site’s size and connectivity, Martis believes it presents a compelling opportunity to create a premier life sciences complex.

Online retail spending has risen significantly over the past two years and is expected to maintain that momentum, which is expected to push new warehouse requirements from e-commerce-related demand past 42 million square feet in Canada through 2025.

The industrial availability rate in the Greater Toronto Area (GTA) is just 0.7 per cent and developable industrial land is scarce, so anything that becomes available is highly sought-after.

Industrial lease rates are hitting all-time highs in the GTA. They’re even higher in its western portion, where Creekside Lands is located, with average rates exceeding $14 per square foot and rising.

While Truscan is seeking to maximize the sale price, it would like to complete the sale of the site expeditiously.

“It’s well-located, shovel-ready and bite-sized,” said Martis. “The other differentiator is that the bank is the vendor. We’re not out there testing the market. We’re willing to sell it at the market rate.”

QuadReal purchased 60 acres of industrial land at 1700 Derry Rd., just north of the airport, for $115 million in an off-market deal with a private family last November. About 35 acres of the site, which also fronts on Dixie Road, is considered developable.

Marketing for Creekside Lands began more than two weeks ago. While no bid date deadline has yet been set, Martis said it’s expected to be in late May or early June.

Most interest in Creekside Lands to this point has come from developers, but Martis said some end users have also inquired about the site.

Don Wilcox Commercial Transactions International May. 6 2022
Steve McLean Business reporter
Steve is a veteran writer, reporter, editor and communications specialist whose work has appeared in a wide variety of print and online outlets. He’s the author of the book Hot Canadian Bands and has taught reporting to college students. He is based in Toronto.