Space-seeking Amazon and the city’s film industry are just two major drivers behind the relentles... 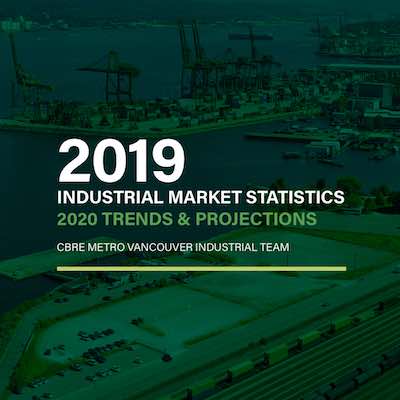 Space-seeking Amazon and the city’s film industry are just two major drivers behind the relentless demand for Metro Vancouver industrial properties, according to CBRE’s latest report.

Major institutional investors, such as REITs and pension funds, are investing heavily in the region’s industrial real estate sector, a segment that still has room for price growth compared to American markets. Prices are climbing and developers are responding to demand.

“We keep saying this year-over-year, and it’s not going to get any better,” said CBRE senior vice-president Chris MacCauley. “Industrial remains the hottest segment in the commercial real estate industry and demand keeps outpacing supply by millions of square feet every year.”

Increased demand combined with a limited supply of land and a historically low vacancy rate of 1.2 per cent has meant significant price increases. The industrial real estate segment saw a 23 per cent growth in land values last year alone and 119 per cent growth in the last three years, said MacCauley, an expert in industrial sales and leasing.

CBRE also recently released its Canada Market Outlook 2020 report, which forecasts a net asking rate for industrial in the Vancouver market of $13.76 per square foot by the end of this year (up from about $13.15 currently).

Just two years ago, the rate hit $10.23 per square foot, which set alarm bells ringing because it was the first time it had jumped the $10-per-square-foot barrier.

“(Investors) have a global perspective on industrial and we are the gateway to Canada, and we are a major port, and there is still some value to be untapped here,” said MacCauley.

“We are physically constrained and that is going to put more upward pressure on our industrial.

CBRE’s final quarterly report for 2019 Vancouver industrial said that global investment company Blackstone was behind the purchase of one of the top-10 land sales last year.

“One of our biggest investors in Metro Vancouver industrial real estate over the last three to four years has been Blackstone and PIRET,” said MacCauley.

“They are huge and they acquired PIRET two years ago. Blackstone has been very bullish and very aggressive in our industrial market here in Vancouver.”

Within the local development community, Vancouver’s Beedie Group continues to dominate industrial land deals in the region, making four of the top-10 land purchases during 2019, according to the report.

The company is responding to strong demand from businesses that want to own what they occupy and as a result, about 70 per cent of Metro Vancouver industrial sales transactions are strata projects, he said.

“We are doing three things,” Conwest chief operating officer Ben Taddei told RENX in an email exchange. “One is we are doing strata.

“The other is development to hold for our own portfolio, so just rent.

“And the other one is joint ventures with local companies,” he said, referring to the new head office, warehouse and distribution facility Conwest is building for Lordco Auto Parts, in Port Coquitlam.

“Industrial is a tough business,” he added. “Margins are tight and you’ve got to know what you are doing. It’s not for everybody.

“Like everything, things move in cycles. Are we at the top of the cycle? It depends who you talk to.

“In some ways, no. But, there is a lot under development and a lot of construction, too. You have to look at the details. And every municipality is different.”

The drivers behind the demand have changed in the last few years, particularly with e-commerce changing the retail landscape.

Amazon’s emergence into the industrial sector in particular is felt in Metro Vancouver and further afield, said MacCauley.

“We are seeing different drivers in our industry now that we haven’t seen for more than five years. We have the film industry, and 60 to 70 per cent of all our occupier demand comes from warehouse distribution, or third-party logistics.

“A lot of those will have e-commerce components within them.”

“Not only is Amazon having an impact in the office market and the industrial market, they are going to be well over 2.5 million square feet when you combine office and industrial over the next few years,” added MacCauley.

“They have over one million square feet of industrial here now and looking for more.

“They are probably representing 50 per cent of all the industrial demand up and down the West Coast.”

MacCauley would like to see policy-makers pay attention to the industrial sector as they did to the residential sector when vacancy rates fell below one per cent in Vancouver.

“That was defined as a crisis, and with the employment space, we’re not far off,” he said, stopping short of actually calling the industrial situation a crisis just yet.

“With a vacancy rate of 1.2 per cent, where that has an impact is if you look at existing companies looking to expand. They have very few options, if any.

“And the other impact we’re seeing, too, is that new entrants to the market just don’t have options here, so they end up looking at other markets, whether it be Calgary or other places in the Pacific Northwest.

“We haven’t lost enough jobs or turned away enough businesses due to lack of options yet for them to take notice. But, with annual population growth it will not take long, as we will need these jobs going forward.

‘It will come to a head very soon and we will have to look at policy changes and doing things differently than we have in Metro Vancouver.”

EDITOR’S NOTE: This article was edited to clarify that $13.76 is the forecast net industrial asking rate by the end of 2020. It also adds the current asking rate is about $13.15 per square foot.