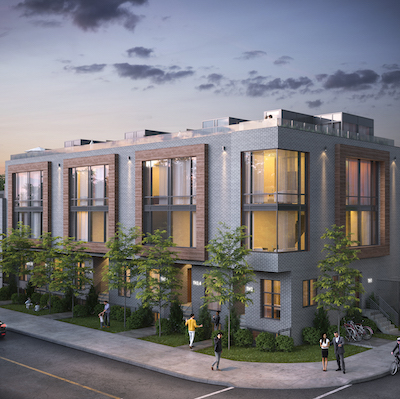 Atria Development has a number of residential projects on the go in Oshawa, Toronto, the GTA and several surrounding cities. This is a rendering of 76 Kingston in Toronto. (Courtesy Atria)

Atria has now grown to about 40 employees and become a vertically integrated company involved in construction, marketing, sales, rentals, property management and more.

It has since widened its scope to include Ontario cities outside of the provincial capital.

Oshawa a key market for Atria

And much of Atria’s activity is in downtown Oshawa, which it first entered by acquiring an empty former government office building at 44 Bond St. W. It redeveloped the building into a 10-storey, 120-unit condominium called Parkwood Residences in 2007.

Atria land development director David Pearce was working for the City of Oshawa at the time of that building’s purchase.

“No one was interested in downtown Oshawa, but Hans saw the opportunity,” Pearce told RENX during a Zoom interview that also included Atria president Hans Jain, associate director of development Shane Kennedy and marketing and sales director Sharon Dawson.

Jain said Parkwood Residences was so successful, and Atria developed such a good relationship with Oshawa’s mayor, city council and staff members, that it led to the company acquiring a property beside the courthouse at 100 Bond St. E.

The underground parking lot is finished and construction is up to the fifth floor. It will include a party room, outdoor terrace with barbecues, a gym and a dog wash when completed.

“Our investment helped spur other investments,” said Jain, who noted more developers are now embracing Oshawa for its easy access to the 401 and 407 highways, public transit, post-secondary education, health care and manufacturing jobs.

Atria has also developed Central on Emma, an Oshawa rental apartment where each of its 20 units has 1,400 square feet of space, three bedrooms and two bathrooms.

“Our philosophy is to build high-quality rentals that are condo quality,” said Jain.

Atria recently acquired a former Canada Post building at 47 Simcoe St. S. which it will redevelop as part of its ongoing involvement with the downtown revitalization and bringing new life to older buildings.

“You have to make it viable and profitable, so you have to think through that and do good for the community and the building,” said Jain. “If you do it right, you’ll have people living there and instead of facing the wrecking ball, you’ll have a thriving building that’s bringing in realty taxes.”

The building, acquired from Canada Post, was constructed in 1954. It will be converted to a mixed-use commercial and residential mid-rise building that will maintain the original façade with a glass component added on top.

Atria hasn’t yet confirmed how many storeys it will add or how many residential units it will include.

Atria has redeveloped a Peterborough building constructed in the 1800s that was most recently used as a YMCA. It kept the heritage façade, bricks and windows, while adding modern elements to what it named Y Lofts.

It will feature more than 130 rental units and amenities will include a courtyard patio, a rooftop terrace, a barbecue area, a party room, a fitness centre, a business centre and storage.

Occupancy at Y Lofts could begin as early as September.

Atria hopes to break ground on Phase 1 of a four-tower development with 1,591 residential units and retail elements on a 4.5-acre site across from Scarborough Town Centre at Brimley and Progress roads before the end of the year. Each of the two phases will include one rental and one condo building.

There will be green roofs throughout the Brimley + Progress Towers complex. The development will also include: two levels of underground parking; above-grade parking; a pool; a gym; rooftop patios; barbecues; and a 65-child daycare facility and playground.

Atria has a number of other projects on the horizon, most in the GTA:

– It has approval to build Beyond, comprised of two 18-storey buildings which will feature about 650 condo units, across the street from 80 Bond.

– A 12-storey, 201-unit “adult lifestyle community” aimed at people 55 and over is also planned for downtown Oshawa. Kennedy said it might also include ground-floor retail.

– Atria is seeking site-plan approval for a stacked townhome project at 76 Kingston Rd., on the edge of Woodbine Park close to Ashbridge’s Bay. Fifteen units with rooftop patios and underground parking will be for sale.

– Registration is open for The Rays, a development of single and semi-detached houses at 390 Leslie St.

– Forty9 Cranfield is a future office and retail space planned for Toronto.

– Registration is open for a site at 120 Metcalfe St. in Aurora, which is close to a GO Transit station, schools, retail, restaurants, spas and fitness facilities.

– Atria has a development planned for 302 Georgian Dr. in Barrie, which is close to Little Lake, parks, restaurants and Georgian College.

– Registration is open for a project at 16 Cannon St. E. in Hamilton, which is close to public transit, coffee shops, entertainment, parks and Burlington Bay.

Don Wilcox Residential Transactions Ontario Apr. 5 2021
Steve McLean Business reporter
Steve is a veteran writer, reporter, editor and communications specialist whose work has appeared in a wide variety of print and online outlets. He’s the author of the book Hot Canadian Bands and has taught reporting to college students. He is based in Toronto.