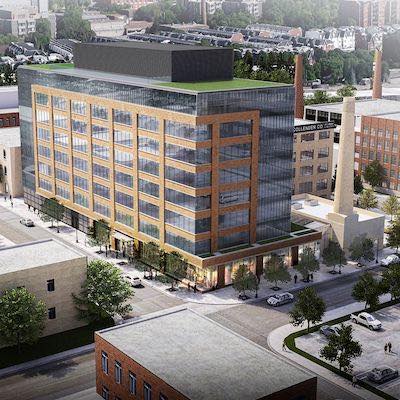 99 Atlantic and 40 Hanna Avenues in Toronto are now owned by a JV involving Blackstone and the site’s developer Kevric. (Courtesy 99atlantic.com)

Blackstone acquired the interest in the property which had been held by PSP Investments. Kevric was also previously a partner in the Atlantic Complex, leading the development and redevelopment projects for the assets.

Kevric remains as managing partner of the new joint venture with Blackstone, a New York City-headquartered firm which invests across a variety of asset classes on behalf of pension funds and other leading institutions. The firm had $230 billion in real estate assets under management at the end of Q3 2021.

Blackstone and the Atlantic Complex

“Our goal is really to identify assets in the best locations with the best physical characteristics that attract the best tenants, particularly tenants in the creative and tech industries,” Nadeem Meghji, Blackstone’s head of real estate, Americas, told RENX in an exclusive interview. “Atlantic Complex is really a premier building that is an adaptive reuse, with a new construction component, that really does serve those types of tenants.

“It’s also in a neighbourhood that is in one of the most dynamic and up-and-coming parts of the city.

“We’re in a world where the office business is clearly evolving, but what we know is tenants want to be in new high-quality buildings with great amenities. That’s what this asset is.”

The deal for the two buildings was brokered by RBC Capital Markets Real Estate Group.

Kevric has been involved with properties in the Liberty Village neighbourhood since 2007, but sold off others while retaining 40 Hanna and 99 Atlantic because of their development potential.

The investment checks off all the boxes Blackstone is looking for as it seeks to deploy more capital in Toronto, and in a very particular type of office class.

“For us, not all office is created equal,” Meghji explained. “This particular complex in this location, we think it is just incredibly well positioned. Increasingly what we find is tenants view the office building as an important part of talent recruitment. That’s why they want to be in these types of cool office buildings and that is part of what attracts us to a building like this.”

At the Real Estate Forum in Toronto this week, both Meghji and Blackstone president and CEO Jonathan Gray were participants, signalling the company’s growing interest in Canada. Meghji told RENX Toronto is of particular interest.

“We’re big believers in Toronto. We think there are really interesting dynamics in this market, driven by technology. We see an enormous concentration of really well-educated knowledge workers and that has really attracted us to the knowledge market.

“For us Toronto continues to be a market of high focus. It’s a place where we want to deploy more capital. It’s really about identifying the right buildings and with the right partners. In this transaction we are really excited to be partnering with Kevric, who was the original developer of the property.”

The 40 Hanna and 99 Atlantic development

The eight-floor building at 99 Atlantic broke ground in early 2018 and was completed in 2020. It has 134,000 square feet of office space, 13,000 square feet of street-front retail space, 12-foot ceilings, barrier-free access and four levels of underground parking with 205 spaces.

Tenants include Blue Ant Media and Sony Music among other commercial and retail businesses.

Both buildings offer easy access to the King Street streetcar and the Exhibition GO Transit station at the south end of Atlantic Avenue.

Richard Hylands formed Montreal-based Kevric in 1997. The company specializes in the redevelopment and repositioning of existing properties and the development of new ones, primarily in Montreal, Toronto and Ottawa/Gatineau.

– With files and additional reporting by Don Wilcox

RENX Staff Commercial Development Metro Vancouver Sep. 23 2021
Steve McLean Business reporter
Steve is a veteran writer, reporter, editor and communications specialist whose work has appeared in a wide variety of print and online outlets. He’s the author of the book Hot Canadian Bands and has taught reporting to college students. He is based in Toronto.