Bluebird Self Storage has added two more properties to its Southern Ontario holdings, and says it... 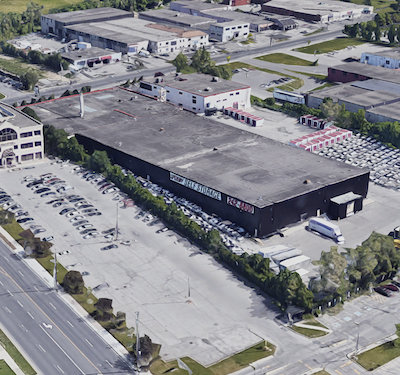 Bluebird Self Storage has purchased this property at 7 Ingram St., in Toronto. The site will be upgraded and expanded. (Google Street View)

Bluebird Self Storage has added two more properties to its Southern Ontario holdings, and says it has spent about $150 million on new properties and development projects in the region in the past year.

The most recent additions for Bluebird and its equity holder NYX Capital Corp. are: a 120,000-square-foot property formerly owned by Speedy Self Storage in the Toronto district of North York; and a 53,000-square-foot facility in Hamilton from Advantage Self Storage.

Bluebird says there are more acquisitions to come in the Ontario self-storage market.

“In addition to these two store acquisitions, which both closed during March 2019, Bluebird has acquired three development sites and two operating stores, for a total of five additional Bluebird locations and $150 million in total capitalization,” said Bluebird principal Jamie Bennett in a release announcing the purchases. “Over the coming months, we are looking to double this initiative with a focused approach to acquisitions throughout Ontario.”

Bluebird did not announce specific financial details about the acquisitions or the projects.

Since identifying what it considers major growth potential for self-storage facilities in Canada, Bluebird  has been ramping up its investment activities.

The company is a Toronto-based subsidiary of Budget Development Partners, which has developed, operated and owned more than 80 self-storage facilities in North America since 1983. It has owned 25 properties in Ontario over the past 15 years, holding some and selling others.

Prior to this acquisition, Bluebird owned or was developing 11 sites in the Greater Toronto Area. The company has plans to upgrade and/or expand both its newest locations.

The former Speedy property in Toronto, at 7 Ingram Drive, will be expanded with the construction of a three-storey, climate-controlled, 60,000-square-foot addition. It will be rebranded and moved onto the Bluebird management platform.

The Hamilton site, located at 24 Sanford Ave., will be rebranded, updated and move onto Bluebird’s management platform.

The three other development sites Bluebird and NYX have acquired over the past 12 months are in Toronto, Mississauga and Burlington:

“Bluebird’s continuing third-party management expansion gives other self-storage owners immediate exposure to a larger customer base via our industry-leading platform and the strength of the Bluebird brand,” said principal Reade DeCurtins in the release.