While Broccolini is preparing to launch sales for LeftBank, its second condominium in Toronto’s R...

While Broccolini is preparing to launch sales for LeftBank, its second condominium in Toronto’s River District, the company has a number of other major projects at various stages in the Greater Toronto Area, Montreal and Ottawa.

Broccolini has hired 50 people since the onset of COVID-19, and now has about 400 employees. It’s also looking to raise $300 million in private capital, in addition to the $600 million its earlier investment funds have accumulated.

“The appetite is there, the funds are there and we’re going to continue doing what we’re doing in terms of building and developing great things,” chief operating officer Anthony Broccolini told RENX. “We want to be the most sought-after builder and developer in Canada.

LeftBank, a 34-storey, 385-unit condo at 91 River St. near Dundas Street East in the eastern part of downtown Toronto overlooking the Don River, was designed by IBI Group and The Patton Design Studio.

While the specific suite mix, size and price ranges haven’t yet been disclosed, LeftBank will include studio, one-bedroom, one-bedroom plus den, two-bedroom and three-bedroom units.

The entire building will be outfitted with high-speed Internet.

LeftBank will feature a linear park on its south side leading to the river and a nearby network of walking trails. River Street will be reimagined and animated with boutique shops facing widened, tree-lined sidewalks.

The walkable neighbourhood is already served by public transit, which will be further enhanced by the future East Harbour transit hub.

Sales for LeftBank will launch this fall. Broccolini would like to start construction early in 2021 and he anticipates a three-and-a-half-year build.

LeftBank will join Broccolini’s neighbouring River & Fifth Condos, a 37-storey building with 580 units ranging in size from 340 to 1,400 square feet.

While some suites in the Graziani + Corazza Architects Inc.-designed building have been held back, Broccolini said 85 per cent of the units have been sold.

Shoring is in and the goal is to get to the bottom of the underground parking level during the next few weeks, then be out of the ground early next year. May 2023 is the target completion date.

While LeftBank and River & Fifth Condos will differ architecturally to add diversity to the neighbourhood, Broccolini said “they’re going to complement one another in terms of building a community.”

On the Ontario industrial building front, Broccolini just delivered a 1.02-million-square-foot build-to-suit fulfillment centre for Amazon, on a site owned by Manulife at 6351 Steeles Ave. E. in Scarborough which was built in a year.

“We’re very proud of the speed, the schedule and the quality of that project,” said Broccolini. “From an industrial standpoint, we see ourselves as leaders in that market sector within Eastern Canada.”

Broccolini completed a 1.02-million-square-foot build-to-suit fulfillment centre for Amazon at 5525 Boundary Rd. in Ottawa in 2019. It is also the landlord and property manager for the facility, which employs more than 600.

Broccolini broke ground earlier this summer for what it says will be the largest fulfillment centre ever built in Canada, at the CITIGATE Corporate Campus in the Ottawa suburb of Barrhaven.

Amazon will occupy the 2.8-million-square-foot facility, which will have the capability to handle 100,000 packages a day. Broccolini will act as landlord and property manager for the building once it’s completed in the fall of 2021.

“We have almost $1 billion under construction with three projects side-by-side,” Broccolini said of his company’s activity around downtown Montreal’s Victoria Square.

Broccolini is building a 40-storey, 1.1-million-square-foot headquarters for National Bank at 800 Saint-Jacques St. 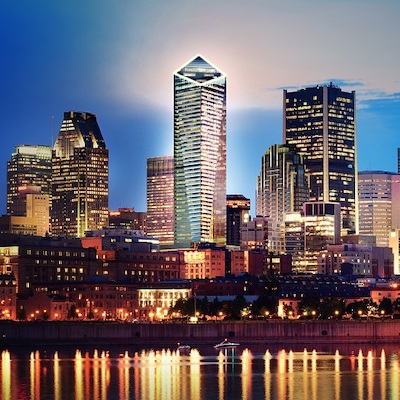 It will feature a two-level cafeteria, a daycare, a fitness centre, 400 bicycle parking spaces, 80 charging stations for electric vehicles and an outdoor garden on the 40th floor. It will also be connected to Montreal’s Underground City (RÉSO) and have an adjacent 40,000-square-foot public park.

The building, which is targeting LEED v4 Gold and WELL certifications, is scheduled to be completed in spring 2023.

The neighbouring Victoria sur le Parc at 700 Saint-Jacques is a 58-storey condo launched in the fall of 2018. Its 400 suites will range in size from 480 to 4,000 square feet. It will also feature a nine-storey podium offering 330,000 square feet of commercial and office space.

Victoria sur le parc is Wired Certified by WiredScore and seeking a LEED Gold certification. It will include a direct link to the National Bank building and Victoria Square Metro station. Construction is at the ground-floor level and is scheduled for completion in 2023.

A 35-storey, 258-unit condo with ground-floor retail at 628 Saint-Jacques launched in the fall of 2017. Construction is up to the 14th floor and a 2021 completion date has been targeted.

Other Broccolini developments in Montreal

Broccolini recently delivered the 418,822-square-foot Maison de Radio-Canada to the public broadcaster, which signed a 30-year lease for the building at Papineau Avenue and René Lévesque Boulevard East.

Broccolini anticipates launching sales for a 25-storey condo with approximately 550 units at the corner of Guy Street and Sherbrooke Street West, the current site of a parking lot, next spring.

It will have one- and two-bedroom units as well as executive and penthouse suites on the upper floors. It will also feature a courtyard.

“We’re very proud of the project and I think it’s going to do a great job of fitting into the urban fabric of its environment,” said Broccolini.

Broccolini acquired a 50 per cent share of the 32-acre Centre RioCan Kirkland site on Montreal’s West Island from RioCan REIT in the fall of 2017. They’re going through the planning process for a mixed-use residential, retail and office complex that could have approximately 2,500 housing units adjacent to a new REM station.

Broccolini said his firm is still “bullish” on Montreal and has a couple of other projects it’s working on that he can’t yet discuss.

The company has an existing land bank and will continue to buy land in Quebec and Ontario to take through the entitlement process for future development, primarily industrial and residential, according to Broccolini.

1M square feet of office absorption in Montreal … during Q3

Steve McLean Commercial Market Reports Greater Montreal Nov. 4 2019
Steve McLean Business reporter
Steve is a veteran writer, reporter, editor and communications specialist whose work has appeared in a wide variety of print and online outlets. He’s the author of the book Hot Canadian Bands and has taught reporting to college students. He is based in Toronto.