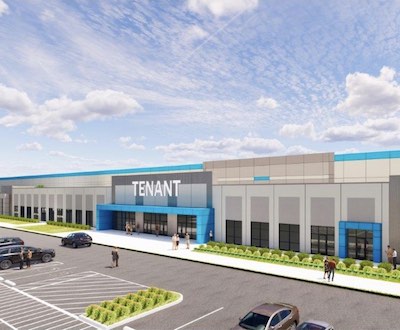 Broccolini has begun site work for major industrial construction projects at two large Southern Ontario properties – in Cambridge and in the Township of Southwold near St. Thomas.

The Montreal-based developer, owner and operator is prepping a 61-acre site in Cambridge, just west of Toronto, and has secured the backing of city council for a Ontario government Minister’s Zoning Order to allow it to fast-track construction of a “state-of-the-art warehouse distribution centre.”

The site is at 140 Old Mill Road and several adjacent properties, which is along the Hwy. 401 transportation corridor.

In Southwold, which is outside the City of St. Thomas and just south of London, Broccolini has acquired a 622-acre property which used to be the site of the Ford St. Thomas assembly plant. That facility closed a decade ago, putting over a thousand people out of work, and was later demolished.

Brocccolini has not released any information about potential tenants, but the London Free Press is reporting a distribution centre to be constructed at the Southwold site will be occupied by Amazon.

Broccolini has developed several previous Amazon distribution centres in Eastern Canada and is currently building in Ottawa, the GTA and in Quebec for the e-commerce giant.

The Southwold site is situated near the village of Talbotville, putting it just a few kilometres south of the Hwy. 401 corridor linking the GTA, London, Windsor and the U.S. border.

“This will bring significant and sustained employment opportunities back to the Township of Southwold and Elgin County.”

Grading and soil decontamination is underway at that site “to ensure the land is prepared for immediate redevelopment” the company said in the release.

“Broccolini’s purchase of the Ford property is exciting news,” said Grant Jones, mayor of the Township of Southwold, in the release.

“Their innovative reputation and wealth of experience in the development of large industrial sites is the perfect fit for Talbotville and their approach to construction is well-supported by our outstanding staff.”

In filings with the City of Cambridge, Broccolini says it intends to construct a distribution centre of almost 1.1 million square feet on a land assembly which includes 128, 134, 140 and 228 Old Mill Rd. as well as several adjacent rural and agricultural lands.

It has created the 140 Old Mill Road LP to develop the project, which will be built for a single tenant.

“This is an ideal location for a warehouse distribution centre, as it has direct access to the 401, and has already completed the public consultation process to be designated for industrial use,” said Delis Lus, Broccolini’s VP of real estate development, in a separate release.

“We intend to build a state-of-the-art facility that meets the highest environmental standards both in terms of construction and ongoing operations.”

Broccolini applied for the MZO to allow it to begin construction as early as this month, so the building can be occupied by September 2022.

The company says the project will create hundreds of jobs during construction, then about 700 full- and part-time jobs when the facility opens.

The Old Mill Road lands were identified by the city for industrial uses in 1999 and Broccolini is applying to have the individual properties all zoned and included for this single development.

RENX has reached out to Broccolini for further comment and details about the projects.