Cadillac Fairview is now the sole owner of the Toronto Buttonville Municipal Airport, a 169-acre... 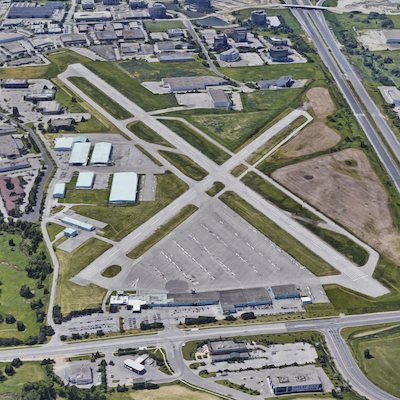 Cadillac Fairview is now the sole owner of the Toronto Buttonville Municipal Airport, a 169-acre property in the City of Markham which for years has been considered a prime site for a major redevelopment.

The real estate giant has paid almost $193 million to acquire the 50 per cent interest in the property which it did not already own, according to sale information provided to RENX by Altus Group’s RealNet database.

The property is located at the junction of Highway 404 and 16th Avenue in the northern portion of the Greater Toronto Area (GTA). It’s about 30 kilometres north of Toronto.

Although Cadillac Fairview declined a RENX request for an interview about the sale, the Toronto-based firm did confirm the acquisition – saying for now it will continue to operate as an airport.

“We can confirm that CF is now the 100 per cent owner of the Buttonville site,” Cadillac Fairview wrote in an email reply.

“The airport lands have been leased back to (Torontair Ltd.) who will continue to operate the Buttonville airport for the foreseeable future.

“Over the coming year, CF will explore various land use options to optimize the site’s future development potential.”

The acquisition price represents $2.283 million per acre and values the entire site at almost $386 million, according to the RealNet data.

The vendor, Armadale Properties Ltd., is owned by the Sifton family, which also operates Toronair Ltd. Cadillac Fairview and Armadale formed a joint venture about a decade ago to hold the property with plans to redevelop the land.

The development plans have yet to come to fruition despite the submission in 2011 of a proposed mixed-use development which would have comprised about 10 million square feet of space.

It proposed Official Plan amendments to allow for a combination of office, retail, hotel, entertainment, public use and residential space. The application was subsequently appealed to the Ontario Municipal Board – which is now known as the Local Planning Appeal Tribunal.

Among the highlights of the plan were a dozen or more mid- and high-rise towers up to 60 storeys and a 13-acre man-made lake surrounded by commercial and office buildings. The community would have accommodated up to 7,000 residents and created thousands of jobs.

The proposal was ultimately shelved in 2020 after years of negotiations and no new plan has been submitted.

The property is currently zoned for industrial uses as a business park area.

Cadillac Fairview and Armadale had put the property up for sale early in 2020 with CF – the real estate owner and manager for the Ontario Teachers’ Pension Plan – stating it wanted to concentrate on its downtown Toronto development land portfolio.

At that time, CF and Armadale said the airport would continue operating until at least the spring of 2023. Despite its relatively small size, Buttonville is consistently one of Canada’s top-10 busiest airports.

It was founded as a grass airstrip and became an official airport a decade later. It currently includes about 330,000 square feet of office and hangar space and operates mainly for private aircraft, a flight school and aircraft sales and maintenance, according to Torontair president Derek Sifton in a 2020 interview with Skies magazine.

Cadillac Fairview is one of the largest owners, operators and developers of office, retail and mixed-use properties in North America. Its real estate portfolio is focused on Canada, but includes properties across the Americas and U.K. The firm also plans expansion into both Europe and Asia.

It’s real estate holdings are valued at more than $36 billion.

Armadale is a Markham-based Sifton family holding company of assets in various industries. It identifies opportunities to develop properties and participates operationally and financially either as consultants, owners or in joint ventures.

EDITOR’S NOTE: This article was edited to correct a reference to the operator of the Buttonville airport, due to incorrect information supplied by CF. Torontair Ltd. is the current operator.