Canada’s industrial buildings of the future being built now

A logistics facility being constructed in the Greater Toronto Area city of Mississauga is taking... 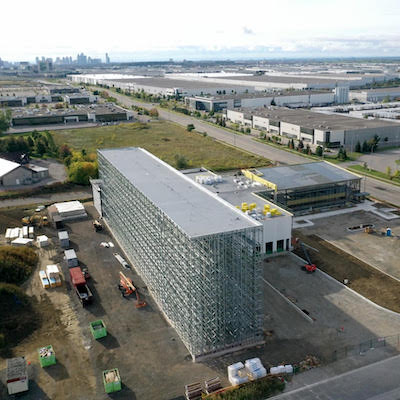 A logistics facility being constructed in the Greater Toronto Area city of Mississauga is taking space optimization and automated storage and retrieval systems to new heights in this country. Literally and figuratively.

However, it won’t be long before these types of buildings are much more common, industry experts say. That is especially true in large cities where available land is at a premium and vacant industrial space at or near historic lows.

Greyson Construction is building the 14,000-square-foot logistics warehouse at 6775 Maritz Dr. in Mississauga for Blum Canada, a company which supplies furniture hinges, runners and other parts.

Due to efficiencies created by the automated pallet storage and picking system, the building’s footprint is one-quarter the size of a typical warehouse, while rising 80 feet in height.

It’s one example of what big-city Canadian logistics space can and will look like in the near future, fuelled by surging demand for e-commerce distribution centres in Vancouver, Toronto and other major centres.

Greyson’s building is expected to complete for Blum in the summer of 2020. At its heart is an automated storage retrieval system designed and installed by Dematic Limited, a European company with a Canadian office, said Greg Johnson, Greyson’s president.

He said the racking system was designed, fabricated and installed by SSI Schaefer.

The system will make the warehouse almost entirely computer-automated with “very narrow aisles” of only six feet wide.

The picking machines will ride a rail system and employ lasers to locate pallets for retrieval. A conveyor system will take the pallets to employees in a picking station, who will then load the products for shipment.

Johnson said the warehouse can hold 6,000 pallets, but will require only 2.3 square feet of floor space per pallet, compared to triple or quadruple the required space in a traditional warehouse system.

“With a conventional building . . . they would need 60,000 square feet of floor area,” he said. “You’re almost shrinking the building by three quarters.”

He said the picking system also eliminates the need for forklift operators. If a company was shipping entire pallets without the need to sort specific items, the warehouse could be “completely automated,” meaning no human element, Johnson suggested. 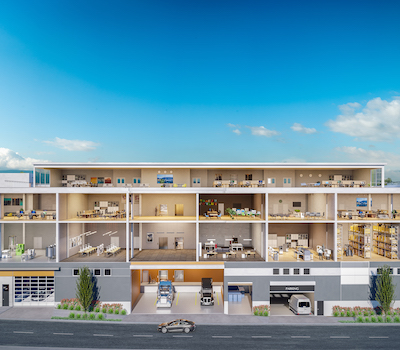 Brent Sawchyn is principal of PC Urban, a Vancouver-based developer which has specialized in a series of urban industrial buildings. He said such high-density logistics centres are already common in Asia and Europe.

“We are seeing a little bit of it happening here, potentially in Vancouver,” Sawchyn explained. “You go to Asia and places like Hong Kong and you’ll see that up to 20 or 21 levels. But, that could be our future.”

As more people migrate to the GTA and Vancouver, the realities of land constraints, the 24-hour business cycle and increased port activity and e-commerce mean developers increasingly need to think outside the box.

While the building is higher-density than most other industrial projects in the area, it’s really more of a throwback, Sawchyn said.

“It’s multi-level, but the reality is (this is) how businesses operated 80 and 100 years ago,” he said. Industrial buildings used to have multiple levels and were located in or near urban cores where people and other businesses resided.

More projects like the ultra-modern facility Greyson is building in Mississauga are coming to land-starved Vancouver and other Canadian cities “sooner than we imagine,” Sawchyn said. 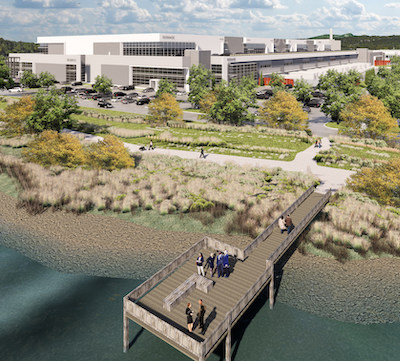 “Everyone is looking at what they can add to their buildings to make them more competitive in the marketplace,” said Garth White, an industrial broker with Avison Young in Vancouver. “The real wholesale changes are expensive and haven’t necessarily been adopted yet.”

White said the biggest tenant, or owner-user, drivers of high-tech logistics space are e-commerce companies, given the explosion of online shopping.

“We did a build-to-suit for a large e-commerce facility in Surrey,” he said. “The big difference in that facility was the IT package.”

It is increasingly common for e-commerce groups to process customer credit card information on-site, meaning they need more security infrastructure at logistics centres than in the past.

“It’s a very expensive improvement that a lot of these groups are requiring, either on new builds or retrofitting old ones,” White said.

Beedie is one of B.C.’s leading industrial builders. It also has four projects underway in Southern Ontario.

Beedie is working with designers and utilities to design buildings sufficiently flexible to accommodate the space and power requirements of automated systems.

One consideration in B.C. is the threat of major earthquakes, she said.

“B.C. increased its seismic code requirements and their structural requirements for seismic events in December 2018, so as you (build) higher in B.C., you require more structural support for the building.”

Another consideration is the overall cost of such a building, said Greyson Construction’s Johnson.

“It’s a big investment,” he said, referring to the automation and racking packages.

He said such systems are obviously best-suited to owner/users who will reap the efficiency benefits over decades, rather than years.

However, fitting 100,000 square feet of product storage into a 25,000-square-foot building reduces costs associated with land, construction and materials, and development fees.

The result is that there will soon be many more buildings like those being built by Blum and Oxford.

“We’re already talking to another company just north of Toronto to build another one of these for them,” Johnson said.