Canderel has purchased 6600 Saint-Urbain in Montreal from Olymbec in a move by the developer to e... 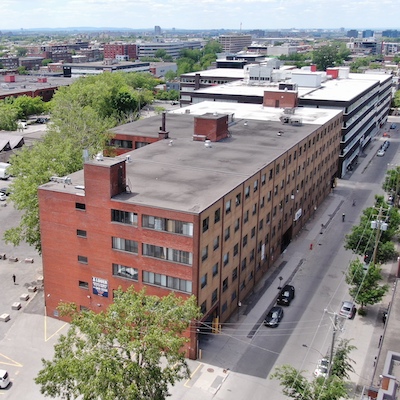 The 6600 Saint-Urbain office building in Montreal, which ha been acquired by Canderel. (Courtesy Canderel)

Canderel has purchased 6600 Saint-Urbain in Montreal from Olymbec in a move by the developer to expand its presence in the Mile-Ex neighbourhood, which has become increasingly popular as a hub for artificial intelligence (AI) firms.

Terms of the deal for the 157,000-plus-square-foot, multi-tenant, mixed-use industrial and loft office building were not disclosed, but Canderel CEO Brett Miller told RENX “we are buying it at a price per square foot that is significantly lower than any construction cost to build new.”

Montreal-based Canderel has more than 350,000 square feet of space in Mile-Ex, including its recent 6795 Marconi development project, which is now home to Microsoft Research Montreal.

The developer also plans a 250,000- to 500,000-square-foot office development project at 155 Beaubien Street West in Mile-Ex, at an old industrial site it also bought from Olymbec about a year ago.

155 Beaubien could involve an investment of “hundreds of millions of dollars,” Miller said. “It would be a very significant development.” The site is now going through the rezoning process and could be shovel-ready in two to four years.

The purchase of 6600 Saint-Urbain is “part strategic and part opportunistic,” Miller said. “We’ve had a long-term interest in the Mile-Ex. We really like the area from a mid-market play.”

He noted Mile-Ex has all the services tech workers are looking for including great walkability scores and good public transport, plenty of restaurants and cafés, and affordable housing nearby.

It’s close to Jean Talon Market and the new Université de Montréal campus and has a critical mass of AI and tech firms such as Element AI, Mila and Facebook.

6600 Saint-Urbain was built in 1965 for Treitel Enterprises and was originally used by the garment industry.

The five-storey building is currently about 70 per cent leased to a digital printing firm, a division of cable company Videotron and a company that specializes in costumes for the entertainment industry.

Canderel plans to invest more than $10 million in improvements to the building over the next five years. Immediate plans include the creation of a new entranceway with a parapet, a new, modern lobby and refinishing of the exterior brickwork.

On the floors, Canderel is coming up with a plan to create common corridors and common tenant washrooms.

Miller says Canderel has a good relationship with Olymbec and “we looked at (6600 Saint-Urbain) about 18 months ago, so we were ready to move quickly.

“As a result, we were fortunate it wasn’t a typical bid process where there’s lots of buyers at the table. We were able to negotiate a fast deal directly with Olymbec.”

Miller notes that Olymbec is very good at buying undervalued real estate and has seen a great increase in value in the Mile-Ex properties it has sold to Canderel.

“Their No. 1 goal isn’t development,” he said. “These properties really are at the stage of significant renovations and overhauls and work that has to be done with the city to get approvals.”

The 6600 Saint-Urbain deal was inked in April at the height of the COVID-19 pandemic and “we did a very short due diligence of 15 days.” The closing date for the transaction was Aug. 10.

“We see this as a hold for 10-plus years,” he said of the property, which gives Canderel three Mile-Ex sites in about a four-block radius.

He noted the City of Montreal will build a linear park between the 6600 Saint-Urbain and 155 Beaubien sites, which means the area will become an office campus.

Rents at 6600 Saint-Urbain will be around $20 gross per square foot, allowing it to cater to more budget-conscious tenants, Miller said. “It’s a very attractive price point for future tenants.”

By contrast, rents at Canderel’s 6795 Marconi are around $45 gross per square foot, which rivals the rents for downtown office properties.

Miller said Canderel spent about $50 million to purchase, renovate and expand 6795 Marconi, which is now essentially a brand new building with state-of-the-art systems.

The goal, he said, is “to have different price points for different appetites in the neighbourhood.”

Miller said despite the current work-from-home trend brought on by the pandemic, Canderel remains confident in the need for offices, particularly for knowledge-based industries.

“The need to be in offices will survive. Employees like being in offices; companies like to have their employees on location,” he said.

Businesses are looking for options and “part of our rental formula is the idea of providing shorter leases, flexible leases, fully figured-out spaces that can be rented on a shorter term basis,” he said.

“This is going to be the new way of doing business and I think that the landlords that can accommodate that flexibility will do better than the ones that hold out for 15-year leases, where tenants are locked-in and can’t get that flexibility.”

Brett Miller making his mark at Canderel after Year One

Steve McLean Residential Strategy National Feb. 26 2020
D
Danny Kucharsky Business reporter
Danny is a multiple award-winning journalist based in Montreal, who has written for about 75 magazines and newspapers in Canada and the U.S. His credits include The Globe and Mail, Montreal Gazette, Maclean's, Chicago Tribune and a wide variety of business, specialized trade and medical magazines. Danny was also the Montreal correspondent for Marketing Magazine for several years.