Cadillac Fairview and its joint venture partner SHAPE have submitted a rezoning submission to con... 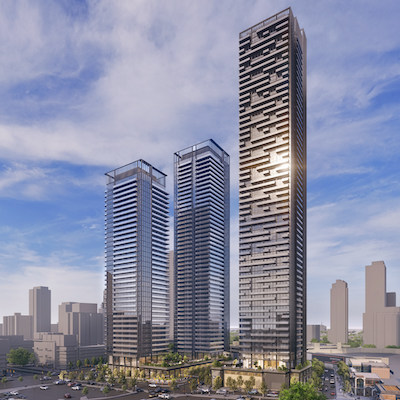 Three residential towers, up to 58 storeys, comprise Phase 1 of a planned intensification at the CF Fairview Mall in Toronto. (Courtesy Cadillac Fairview)

Cadillac Fairview and its joint venture partner SHAPE have submitted a rezoning submission to construct a new master-planned community at the CF Fairview Mall in Toronto, which would kick off with three residential towers up to 58 storeys tall.

The partners say the first phase of the development plan for the property at Don Mills and Sheppard Avenue East would consist of one rental apartment tower and two condo towers. It would be located adjacent to the existing Don Mills subway station on the south side of the shopping centre property, fronting onto Sheppard Avenue East.

The shopping centre is also bordered by the junction of highways 404 and 401.

“For more than 50 years, CF Fairview Mall has been a community hub in North York, serving the evolving retail, transit, entertainment and service needs of the local area residents and businesses,” said Wayne Barwise, executive vice-president, Development, Cadillac Fairview. “As our longest-operating shopping centre in the GTA, the master-plan redevelopment extends our long-term vision and supports an expanding demographic seeking convenient, high-quality, and accessible residency in a dynamic, transit-connected community.”

The Phase 1 towers would contain retail components and amenities. The plan also includes a pedestrian-oriented urban plaza to be known as Village Green.

It will replace an existing surface parking area and driveways and a portion of a five-storey parking structure.

“SHAPE could not be more excited to expand into the Toronto market alongside our valued partner, Cadillac Fairview,” said John Horton, president and CEO of SHAPE, in the announcement. “Following our incredible success with RC at CF Richmond Centre (in B.C.), we’re ready to raise the bar, engage the local community and set a new standard for urban living with the complete reimagination of CF Fairview Mall.”

CF Fairview Mall is undergoing the final phase of a previously announced $80-million renovation and revitalization of its 230,000 square feet of existing department store and other retail space, including a T&T Supermarket outlet. The work involves introducing new brands, restaurants and improving pedestrian access to the property and the nearby Don Mills subway station.

The mall renovation, which has been underway for about two years, is expected to be completed in late 2022.

About Cadillac Fairview and SHAPE

Wholly owned by the Ontario Teachers’ Pension Plan, CF manages in excess of $35 billion of assets across the Americas and the United Kingdom, with further expansion planned into Europe and Asia.

Internationally, CF invests in communities with partners including Stanhope in the U.K., Lincoln Property Company in the U.S., and Multiplan in Brazil.

SHAPE is a fully integrated Vancouver-based real estate investment, development and management company leading some of the largest master-planned projects in North America including The Amazing Brentwood and The City of Lougheed.

Through its operating platform, SHAPE specializes in complete, transit-oriented communities with shops, restaurants, public space, entertainment and residential homes in one cohesive place.