Choice Properties REIT (CHP.UN-T) has set itself on a course of redevelopment, diversification and expansion with its $6 billion purchase of Canadian REIT’s (REF.UN-T) sizeable portfolio of assets. 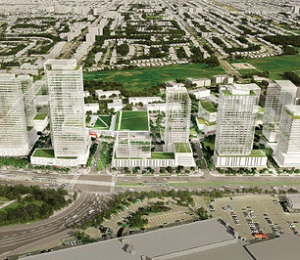 The real estate arm of retail giant Loblaw (L-T), George Weston Limited  (WN-T) and the Weston family announced the acquisition on Thursday. When the deal closes, likely sometime in April, it will create Canada’s largest diversified REIT with an enterprise value of more than $15 billion.

As Weston family patriarch Galen Weston said on a conference call with analysts hours after the sale was announced, Choice Properties was always meant to be more than just a holding company for Loblaw-anchored real estate. Now, Choice has taken the most significant step in that direction since its formation in 2013.

“We’ve always had an ambition to really establish Choice Properties as a real estate entity on its own,” Weston said. “We always contemplated M and A as a long-term, strategic option for us.

“So from a Choice perspective, we conducted a strategic review, we identified potential partners, complementary sources of value creation and ultimately concluded that CREIT was the right fit.”

Diversification is one key reason for the acquisitions – both in its tenant base and in its overall holdings. Increasing the company’s redevelopment portfolio is another.

“I would say (the acquisitions) are quite strategic and one of the important aspects of this transaction for Choice properties is the increased diversification,” Weston explained, pointing to the industrial sector as one example. “Choice already owns a number of industrial-type units, but they are Loblaw-occupied. So now we are increasing our exposure to industrial, which is something we were very anxious to do.”

* Choice Properties to acquire CREIT in $6B transaction

“We are diversifying our tenant mix as well, so we think that is a very positive aspect of this transaction.”

However, in the industrial sector at least, Choice is staying within its area of expertise. Upon completion of the acquisition, the industrial portfolio will consist of 92 per cent warehouse and distribution.

That won’t necessarily be the case with the rest of the diverse 206-property, 25 million-square-foot portfolio.

Management at Choice has clearly been watching other retail property holders as they’ve battled e-commerce and a changing relationship between retailers and customers. In particular, Choice is beginning to focus on redevelopment and intensification in the hunt for better returns.

It has already begun several such projects. This acquisition will leave Choice Properties with, by its own estimate, more than 60 sites in its redevelopment pipeline. Forty-eight of these come from the Choice portfolio, the rest from CREIT holdings.

The vast majority – 88 per cent – are in major urban markets.

At many of these properties, the on-site mix is about to undergo a major change.

“A lot of the growth in this company is going to be coming from capital investment and redevelopment projects,” said Choice president and CEO John Morrison, who will step aside as CREIT boss Stephen Johnson takes the helm of the combined entity.

“In between that we’ll have office, but it will depend on the site. If you think about the transit-oriented sites in Toronto, for example, it is highly likely there will be an office component on those sites but the majority will be residential.”

* 2280 Dundas St., West: The development of a “complete community in an established transit hub”, around an existing Loblaw-anchored site.

“Golden Mile and 2280 Dundas are sites that we are preparing to redevelop as complete communities offering various housing forms, office, retail and other amenities,” Morrison said. “Similarly, 390 Dufferin and 1050 Sheppard Ave. are ready to be developed.”

Acquiring CREIT also brings into the Choice fold a management team with more experience outside the retail sector. “We are not as deep in office and industrial as CREIT is,” Morrison admitted.

Finally, he said, several of the CREIT sites to be acquired can be rapidly redeveloped.

“It advances the timing around the execution of the pipeline, because some of the CREIT properties are in a position to move forward a little bit faster than some of the Choice properties.”

In the area of funding, the trust has arranged a new $1.5-billion revolving credit facility to provide it with flexibility for its development and future growth.

While absorbing a portfolio of properties which increases your overall value by about a third might be a massive undertaking, Morrison said Choice is not necessarily done acquiring new assets.

“In this combined form, you see a very fulsome commercial real estate entity here. So that opens the door to be looking at other assets be it office, industrial, residential etc., as we continue to build out the platform,” he said. “We will now have a full complement of expertise.

“So we will always continue to look for the right strategic acquisitions that we think can add value to the portfolio, so that program will continue.”

He was non-committal on whether the combined Choice REIT will have assets to divest.

“As a prudent real estate company and prudent investors you always look at the portfolio from an investment perspective,” he said. “If we determine that there are assets we don’t have a long-term view on, or we think we should exit certain markets or certain properties, then we’ll take that into consideration.”

As for what all this will mean to the bottom line at Choice Properties, that was left to the president and CEO of George Weston Limited, Richard Dufresne, to wrap up:

“We did not pursue this transaction based on short-term accretion or dilution,” he said. “We believe there is room for multiple expansion here due to our newfound scale; NOI diversification, growth potential, more focus on urban centres and improved liquidity in our units going forward.”