A former Chartwell executive has gone on his own to launch Cloria, a new brand of all-inclusive r... 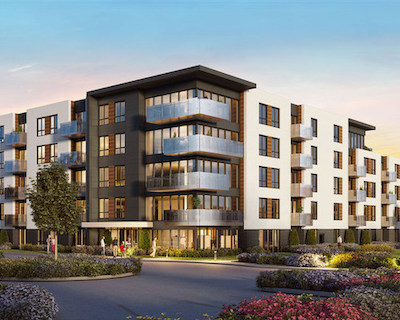 This project in Terrebonne will be the second Cloria “active adults” community to be constructed in Quebec. (Courtesy Cloria / Régis Coté & Associates)

A former Chartwell executive has gone on his own to launch Cloria, a new brand of all-inclusive rental development for active retirees in Quebec.

Maxime Camerlain, president of Cloria, is building his second residential development for “active adults” in Terrebonne, about 35 kilometres north of Montreal, at a cost of about $35 million.

Construction of the first Cloria was completed in November and it is now almost fully occupied. The 115-unit building is in Saint-Mathieu-de-Beloeil, about 45 kilometres east of Montreal.

“It really was a good success for us. The formula has resonated with our crowd and we’re extremely happy with the intake.”

Camerlain, who was vice-president of integration and vice-president of sales and marketing during his eight-year stint at Chartwell that ended in 2019, says he was at a point in his career where he felt it was time to explore new things.

“There’s always going to be a good place for what we know as retirement homes, but I think consumers are going to look for something different and that’s what we’re trying to offer.”

During his time at Chartwell, Camerlain concluded retirement homes with up to 130 units are the ideal size, something he intends to replicate with Cloria. They “create a good community where you know everybody. Sometimes in a bigger setting you can lose a bit of that.”

That “human-scale” size of development “actually helps us a lot to get into communities” and leads to good receptions with urban planning departments, Camerlain says. “We’re not aggressively big and we’re not imposing. We marry ourselves to the communities.”

The all-inclusive rentals at Cloria have 4,000 to 5,000 square feet of common spaces, including a community kitchen, co-working lounge, fitness centre, private lounge with billiard table and fireplace, home theatre room, conference rooms and a community garden.

“We don’t have dining services or care services,” he says. However, buildings will be located close to neighbourhood services.

Cloria connected communities built the first Cloria on its own, but for the Terrebonne and subsequent developments it has teamed up with commercial developer Odacité Immobilier to create the Cloriacité Investissements banner.

Cloriacité has also teamed up with the Fonds immobilier de solidarité FTQ for the Terrebonne project and at least two other Cloria projects to be announced in the coming weeks and launched this year.

“This is the start of what we hope to be a good and strong relationship,” Camerlain says.

Teaming up with the Fonds “gives us possibility to expand, it gives us resources, it gives us knowledge,” he says. “They’re not just in it for the financial contribution. They help. They’re real partners.”

Cloria rents about $2 per square foot

In Greek mythology Cloria was the Goddess of Spring, which provides another perspective for people who may think seniors are in the fall of their lives, Camerlain says.

Cloria residents “are generally at the same places in their lives. That idea of community is really what brings it to another level,” he says, adding organized events will be added once the pandemic eases.

Residents include people who are still working full-time or phasing into retirement, people with a cottage or a place in Florida and people who want to stay close to their children or their former home.

“It’s a good option for people who have decided to sell their home and get out of the real estate market.”

For the Terrebonne project, some adaptations have been made for COVID-19, including corridors widened from five to six feet to allow for better physical distancing, independent air exchangers in each unit and doors with automatic locks that can be unlocked with a smart phone or a chip.

Future Cloria developments will focus on areas near Montreal – “We’ll leave the city to the Montreal developers” – and on other major markets in Quebec such as Quebec City and Trois-Rivieres.

In its second phase of development, Camerlain plans to expand Cloria to Ontario. “We’re going to be strategic and take our time but ultimately when we look forward, that’s where we want to go. Our objective is to have 30 communities by 2030.”

No other types of developments are planned by the company.

“We’re trying to be disciplined, strategic and surgical,” he says. “We’re very disciplined about what we’re trying to put to market. What we do we do well. We feel if we can concentrate on that, that will be part of our edge.”

Steve McLean Residential Transactions Ontario May. 3 2021
D
Danny Kucharsky Business reporter
Danny is a multiple award-winning journalist based in Montreal, who has written for about 75 magazines and newspapers in Canada and the U.S. His credits include The Globe and Mail, Montreal Gazette, Maclean's, Chicago Tribune and a wide variety of business, specialized trade and medical magazines. Danny was also the Montreal correspondent for Marketing Magazine for several years.