Nathalie Roussin is banking on the Quebec government soon giving the go-ahead to a long-planned t... 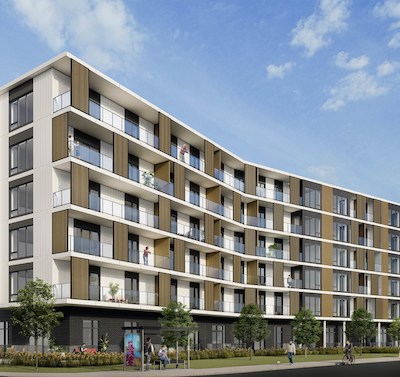 Nathalie Roussin is banking on the Quebec government soon giving the go-ahead to a long-planned tramway system in Quebec City.

Roussin and other members of her family-run real estate businesses own more than three million square feet of land steps from Quebec City’s new IKEA store and near Highways Duplessis (540), Félix-Leclerc (40) and de la Chaudière Blvd. which they’re aching to turn into a mixed-use, industrial, commercial and residential development.

Développements Roussin has owned the land for more than 20 years, but the arrival of IKEA in 2018 and other developments have increased interest in the area, which is slated to be part of the tramway route.

“I think in a year or two we’ll be able to think of starting the development,” Roussin says.

However, the fate of the proposed tramway has been up in the air since November when Quebec’s office on public hearings on the environment, the Bureau d’audiences publiques sur l’environnement, released a report critical of the plan. The provincial government has stalled on giving the green light to the Quebec City project, saying it wants assurances the project will be on budget and adequately serve the city’s suburbs.

Roussin predicts the tramway will be popular and that having a residential development as part of the project will be a stand-out for the area.

“I think our governments are working on finding a solution (on the tramway.) There’s work to be done but I’m convinced, we’ll get there soon.”

Immeubles Roussin was founded more than 60 years ago by Nathalie Roussin’s father, Maurice. She manages the firm with her brother and sister.

The company has developed and manages more than 1,500 rental units exclusively in the Quebec City area, with a concentration in Sainte-Foy, Lebourgneuf and Beauport.

“We know these areas well, so we can respond well to clients. Being close to clients is important to us.”

It also has a seniors’ residence with 300 clients and more than 700,000 square feet of industrial and commercial space in several buildings.

Immeubles Roussin is currently building the $60-million L’Aromate in Sainte-Foy, which will consist of 189 “rental condos” – apartments with condo-style amenities included.

“There hasn’t been new product in the neighbourhood for a long time. People want to move into the area but are looking for something modern with a trendy design,” Roussin says. “That makes it an area of choice for us. It’s a really good site in a well-developed area, with access to all kinds of services.”

Rentals started last fall and about 30 units have been leased. Rents start at $1,100 to a maximum of $2,500 and include amenities.

Immeubles Roussin is also currently building the fourth building in its La Station rental condo development in Beauport. It will be delivered in July.

Construction of the fifth and final building will start next year, bringing the development to about 240 units. Rents start at $885 for a loft apartment.

Quebec City and its “rental condos”

Roussin has been with the family business for more than 20 years, the last 10 years as president. “I feel privileged to be at the head of a great company like this one,” she says.

Trained as an engineer, she has been involved in several facets of the company, doing everything from working as a carpenter on construction sites to working in customer service.

Immeubles Roussin has 250 employees, including 100 who are directly involved in building upkeep –from electricians to carpenters.

The company does not have plans to venture further afield from Quebec’s capital city for real estate development. “There is room for development in Quebec City, so we’ll definitely keep our focus on the city.”

The company also plans to maintain its rental formula and not develop condos that are turned over to owners.

“We prefer maintaining ownership of what we build. We’ve always wanted to develop buildings we can rent and serve our customers year after year.”

Roussin says Immeubles Roussin has developed a number of “rental condo” projects in recent years because people are seeking fewer responsibilities and the units respond to their needs.

The units are popular with empty-nesters who no longer want to maintain their own homes and professionals seeking to concentrate on their careers and maximize leisure time.

“They want someone else to do the work,” she says. “I think people are looking for flexibility. That’s what we offer them.”

Danny Kucharsky Commercial Transactions Greater Montreal Mar. 16 2021
D
Danny Kucharsky Business reporter
Danny is a multiple award-winning journalist based in Montreal, who has written for about 75 magazines and newspapers in Canada and the U.S. His credits include The Globe and Mail, Montreal Gazette, Maclean's, Chicago Tribune and a wide variety of business, specialized trade and medical magazines. Danny was also the Montreal correspondent for Marketing Magazine for several years.