So-called “rental condos” are the way to go in the Quebec City area according to André Pelchat, p... 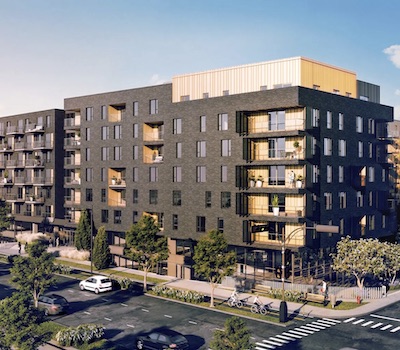 The MU “rental condos” are being built in Quebec City by Immostar. (Courtesy Immostar)

So-called “rental condos” are the way to go in the Quebec City area according to André Pelchat, president and founder of Immostar, one of the provincial capital’s major residential developers.

That’s why Immostar is using the all-inclusive rental condo concept – “a bit of marketing,” Pelchat acknowledged – for his newly launched $130 million, 465-unit MU project in Sainte-Foy.

Condos in Quebec City “don’t work very well,” he told RENX: “People here don’t want to have anything to worry about. They don’t want to attend condo board meetings.”

He noted some condo owners in Quebec City have been burned by poor construction and there have been “horror stories” involving everything from leaking roofs to poorly built balconies. This has resulted in reserve funds at condos being depleted and requiring replenishment.

Many Quebec City civil servants don’t realize they have “incredible buying power,” Pelchat added. Because of their “extraordinary pensions,” many “are millionaires but they don’t know it.”

MU is being developed with partners Fiera Real Estate and Claridge on a site bordered by Laurier Boulevard, Jean-de-Quen Street and Lapointe Street.

The site, known as Îlot Lapointe, once contained 16 bungalows, which were surrounded by the towers of a nearby hospital, retirement home and office buildings.

The MU partners spent $16 million to acquire the land in 2018 and work started last fall with the demolition of the single-family dwellings.

MU, a name that denotes movement or change, will include 80 different types of units, from studios to townhouses to “prestige” luxury units on the top floors.

Because it will be located on Quebec City’s upcoming tramway line on Laurier Boulevard, the eight-storey development will be a TOD (transit-oriented development) and will seek WELL certification.

Immostar will begin renting units in August after Quebec’s construction holiday. For an apartment of about 500 square feet, rents will vary from $1,200 to about $2,000.

First deliveries are scheduled for July 2021 and the project will be completed in March 2022. 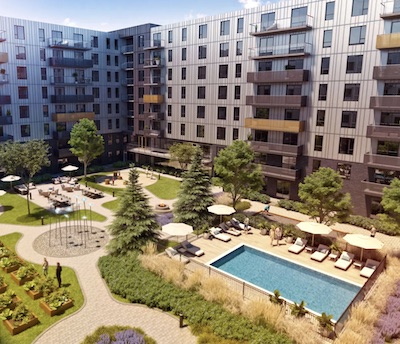 The interior courtyard at MU in Quebec City, shown in this artist’s conception. (Courtesy Immostar)

Immostar – a name that combines the words immobilier (real estate) and star – has 850 rental units under construction with an investment of $250 million in the Quebec City area. “This is our biggest year,” Pelchat noted.

One of the other projects under construction is the 187-unit, 13-storey Le Huppé, another rental condo development. The building, launched last November in Lebourgneuf, is the first rental project in Quebec City to seek WELL certification.

Among the other projects underway is Le Maguire, a 45-unit rental condo development on Maguire Avenue in Sillery.

Pelchat, who has been in real estate for 35 years, has developed more than $3 billion worth of real estate during his career. Prior to forming Immostar, he and his partners built several power centres in Quebec City and Montreal.

Founded in 2003, Immostar has developed more than $1 billion worth of real estate projects in the last 10 years, primarily in the Quebec City area.

The company has developed a number of power centres and shopping centres. It also has industrial and office buildings in its portfolio of more than three million square feet.

The company moved into multiresidential development in a big way as the popularity of densification in the central core of Quebec City grew.

Adapting to impact of pandemic

Pelchat, who is confident about Quebec City’s real estate future due to its growing immigration, geographic location and low unemployment (at least prior to COVID-19), said Immostar’s future plans include densification of its shopping centres and a foray into the Montreal market.

He said the coronavirus pandemic will change the way Immostar develops its future residential projects.

Given the disastrous number of seniors who died in Quebec’s CHSLDs (long-term care homes), he predicted there will be a growing desire among the elderly to remain longer in their homes.

Pelchat said Immostar will adapt its designs and services to help delay the need by seniors to move into old age homes and CHSLDS.

Among the moves would be agreements with private doctors to allow them to see seniors in their apartments a certain number of times per year.

There would also be fitness and yoga courses and veterinarian visits for tenants who are pet owners. All of these services would be included in the rental cost.

“That’s what’s going to happen with what we’re currently living through,” he said.

Danny Kucharsky Commercial Transactions National Jul. 16 2020
D
Danny Kucharsky Business reporter
Danny is a multiple award-winning journalist based in Montreal, who has written for about 75 magazines and newspapers in Canada and the U.S. His credits include The Globe and Mail, Montreal Gazette, Maclean's, Chicago Tribune and a wide variety of business, specialized trade and medical magazines. Danny was also the Montreal correspondent for Marketing Magazine for several years.