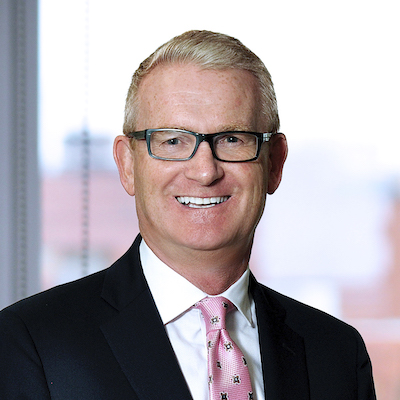 Colin Johnston, president of research, valuation and advisory at Altus Group. A survey of Canadian executives has identified rising concern about future office leasing rates due to the impact of the COVID-19 pandemic. (Courtesy Altus Group)

Canadian commercial real estate owners and managers have plenty of potential pain points these days as the pandemic continues, but an Altus Group survey indicates they are increasingly concerned about office leasing rates over the near and mid terms.

“Landlords are worried about near-term lease rollover,” said Colin Johnston, president of research, valuation and advisory at Altus Group, in an interview with RENX. “So if you’ve got a great building and you don’t have any lease expiries coming up in the next few years, you’re feeling pretty good.

“But if you’ve got some near-term expiries, couple that with this work-from-home phenomenon (and) there’s some questions as to how strong the rental rate market is going to be going forward.”

Layoffs and rising unemployment, small business bankruptcies, more stringent financing conditions and a decline in consumer confidence were all identified by respondents as factors which could significantly impact the commercial real estate market in Canada.

Work from home: “This is working”

The June survey, following on an initial survey conducted in April, also found concerns over recession, government debt, oil prices (a particularly strong concern in Alberta) and bankruptcies have intensified.

The surveys asked the executives which risks might have the most lasting impacts on the commercial real estate market.

“Layoffs and rising unemployment and small business bankruptcies have consistently been there for office,” said Johnston..

“But what happened with this June survey, a bunch of people said ‘Hey you forgot something else. Forget financing. Let’s talk about this whole-work-from home phenomena and how that is going to lead to a significant change’.”

When the initial survey was taken, the focus was on getting people out of the office and setting them up to maintain productivity from home work environments. Two months later, that has shifted.

“Now office landlords are saying ‘Hhey people are being pretty productive. This is working’ ,” Johnston observed. “This work from home is really, really significant going forward.”

That is leading more executives to worry about rent sustainability and office leasing going forward.

“These trends are here to stay,” added Johnston. “The longer it goes on, I think we’re going to fundamentally change and if you ask me if we’re going to have a hybrid working (environment), I think that’s what’s going to happen.

In the survey, Johnston said several respondents suggested the suburban office market could become popular again. Perhaps in the major markets because of COVID, fewer employees will want to use the public transit systems to head downtown.

“When we asked the question to landlords if they are going to defer their cap-ex or reduce the scope of their capital expenditures on their office buildings, that’s growing as well,” he said.

Johnston said owners of downtown office space in major urban markets may not be experiencing major rent collection issues, but with fewer people in the buildings parking revenue is certainly impacted and the health of food court tenants and other services will be severely challenged.

“In Canada, we had a very, very strong office market going into this. We had historically low vacancy rates, we had increasing rental rates,” Johnston noted. “We were in a good position.

“I don’t in any way want to say that the office market is going to crater, because it’s not, but I do think this work from home is going to create some uncertainty and it’s going to play out over the next six to 18 months.

“After layoffs and unemployment and small business bankruptcies, I think work from home is right up there.”

Survey respondents said over the longer term, a rise in vacancy from bankruptcies and rationalization of space will also exert downward pressure on net effective rents and increase the risk of bad debts.

Cash flow may be affected by longer periods of absorption for some premises, in addition to loss of base rent, loss of recovery from operating costs and other revenues.

9 lessons from the pandemic; or, the more things change…

John Clark Commercial Ecommerce National Jul. 22 2020
M
Mario Toneguzzi Business reporter
Mario Toneguzzi, based in Calgary has 37 years of experience as a daily newspaper writer, columnist and editor. He worked for 35 years at the Calgary Herald covering sports, crime, politics, health, city and breaking news, and business. For 12 years as a business writer, his main beats were commercial and residential real estate, retail, small business and general economic news. He nows works on his own as a freelance writer and consultant in communications and media relations/training.