A lack of available product is to account for a first-quarter slowdown in commercial real estate transactions in the Greater Toronto Area, according to Avison Young’s First quarter 2017 / Office Market Report. 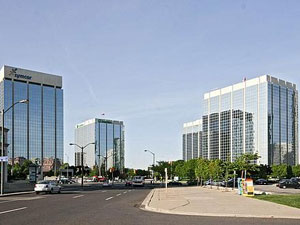 Starlight’s acquisition of a 50% stake in the Mississauga Executive Centre for $167 million was one of the largest office transactions in the GTA in the first quarter of 2017, according to Avison Young.

The analysis of sales activity in the GTA notes a 14 per cent quarter-over-quarter decline in sales to $2.4 billion through the first three months of 2017. It’s the third consecutive quarter of falling investment sales, but is still an increase of 12% from Q1 2016.

“Despite lower dollar volume, investor demand has not abated, and is hampered only by ongoing scarcity of product,” the report reads.

It goes on to note that while the first quarter is traditionally a slow period for transactions, AY expects 2017 overall to repeat the performance of 2016, when the GTA market experienced $12 billion in CRE transactions.

Some other highlights, broken down by sector:

–  “Historically low vacancy continues to attract investors to this sector,” the report states, noting the $746 million in sales made it the most active asset class. The sector has grown for six straight quarters, with $3.8 billion in assets changing hands during the 18 months.

– While Peel Region had 47% of the total transactions ($353 million), the largest single deal involved the sale of two buildings at 100 and 107 Alfred Kuehne Blvd., in Brampton by KingSett Capital to the Healthcare of Ontario Pension Plan (HOOPP) for $113 million.

– Warehouse and distribution facilities remained popular in the sector, taking four of the top five sales spots by dollar value.

– Two major transactions boosted the GTA office sector to $601 million in transactions from $369 million in the fourth quarter of 2016. The prime Dominion Public Building in Toronto was sold by Canada Lands Company to Vancouver-based Larco Investments for $275 million. That represents a price per square foot of $758.

In the other major deal, Starlight Investments purchased a 50% stake in the 1.1-million square foot Mississauga Executive Centre from Alberta Investment Management Corporation for $167 million.

– By contrast, the next-to-largest sale was a $33.6 million transaction for 105 Gordon Baker Rd., sold by Canada JC Investment Group Inc. to Antoo Ltd.

– Retail went from the top performer in Q4 of 2016 to just $445 million in trades – a 57% drop. Unlike Q4, when two $100-million-plus portfolios were sold, transactions this quarter were for smaller deals.

– The largest featured the sale of four VEREIT (VER-N) properties in the GTA (worth $22 million, all occupied by Red Lobster at time of sale) to the Orion Real Estate Group National Retail Portfolio.

– Almost half the acreage sold was in Durham Region, but the highest dollar value ($131 million) was in the Region of Peel.

– The largest deal involved the sale of 25 Good Shepherd Ct., by Sisters of the Good Shepherd of Toronto to the Toronto Catholic District School Board for $18 million – about $5.7 million per acre.

– Avison Young notes this was the least-traded asset class, likely due to a scarcity of product, with $247 million in transactions. It was down 15% from Q4 and eight per cent from Q1 2016.

– Starlight Investments made three separate transactions in the class, accounting for $118 million worth of properties. In total, including its office transaction, Starlight acquired $285 million in property during the quarter.