Crombie Real Estate Investment Trust (CRR-UN-T) is nearing the midpoint in its plan to spend $511... 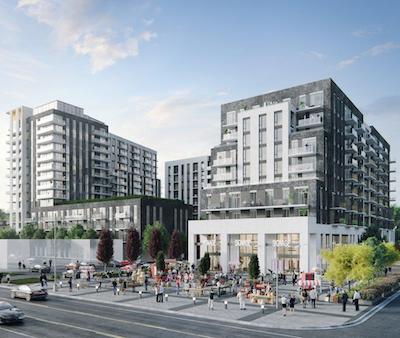 A rendering of Crombie and PrinceDev’s Village at Bronte Harbour in Oakville, Ont. (Courtesy Crombie)

Crombie Real Estate Investment Trust (CRR-UN-T) is nearing the midpoint in its plan to spend $511 million on its first five mixed-use redevelopments at properties across Canada.

“We have live cameras of every project. I look at them every day,” executive vice-president and chief operating officer Glenn Hynes told RENX.

He said Crombie is estimating a yield on its cost of between 5.2 and 6.2 per cent over the next two-and-a-half years. At the end of Q1 2019, about $230 million of the half billion dollars has been committed, with $270 million remaining.

When these five projects are completed “and we’ve spent that $500 million, we think the value of those projects will be somewhere between $650 and $800 million, and that’s a big deal,” Hynes said. He called it “a very strong outcome.”

Hynes was appointed chief operating officer last November and oversees development, construction, operations and leasing nationwide. He joined Crombie as chief financial officer and secretary in 2010 (he also still holds those positions) and added the executive vice-president title in 2014.

“We’re looking forward to getting these projects finished and creating that value,” said Hynes, noting the projects will add a new component to Crombie’s business.

Crombie has been “largely a grocery-anchored retail REIT for the first 10 or 12 years of our 13-year existence,” Hynes said. With shifts in demographic and more people moving to urban cores, “the reality is that there’s a huge demand for a rental accommodation or a condo accommodation.

“So the highest and best use for these sites is densification.”

The $275-million redevelopment of Bronte Village Mall to accommodate two rental towers of 10 and 14 storeys is the largest of the projects.

“That’s the only project, individually, that’s over $100 million (at) our share,” said Hynes.

Crombie is a 50 per cent partner with PrinceDev for the luxury rental development. It’s located at the corner of Lakeshore Road W. and Bronte Road, roughly 50 kilometres west of downtown Toronto.

Bronte Village includes 17,500 square feet of ground-floor retail in addition to the existing Sobeys grocery store and a recently opened Rexall pharmacy next to the property. 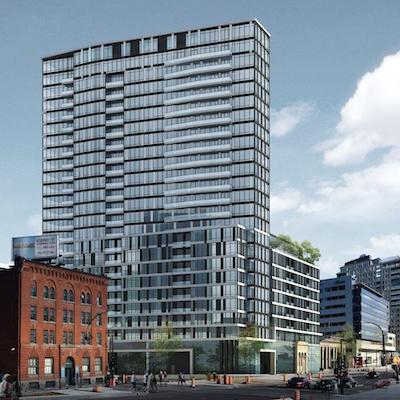 Rendering of the Le Duke redevelopment in Montreal. (Courtesy Crombie)

“We’re looking at early 2021 for completion,” Hynes said. “We’ll be able to occupy some of the lower floors.”

The pair of Davie Street towers is within walking distance to English Bay.

The REIT is taking a “slightly different approach” with this project in that “we own 100 per cent of the commercial, which is the grocery store and some other ancillary retail,” Hynes said.

Across the board, there are nine sites in Vancouver “that over the next 10 to 15 years, it could be developed into mixed-use projects,” said Hynes. Ideally, that entails a grocery store on the ground floor with high-density residential above.

“Our preference is actually to have residential rentals versus condo, and the reason is that this real estate is very precious and they’re not making any more of it,” he said. In a condo, “you’re effectively selling off your completed project. You’re in and you’re out, whereas with residential rental you’re the long-term owner.” 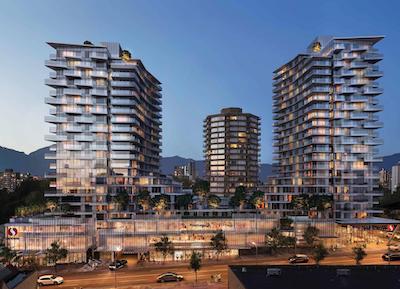 Two residential towers are being developed, in partnership with WestBank, along Davie Street in Vancouver. (Courtesy Crombie)

During the first quarter, Crombie added a 24th development property to its pipeline with the acquisition of a $32.4-million, 20.25-acre site in Pointe-Claire, Que. Crombie will develop and own a customer fulfillment centre for Empire Company Ltd., which is launching an online grocery home delivery service in the Greater Toronto Area, Ottawa, and major Quebec cities.

It will be branded as ‘Voila by Sobeys’ and ‘Voila par IGA.’

The 285,000-square-foot centre will be powered by U.K.-based Ocado Group’s online grocery platform, and will become Empire’s e-commerce distribution hub for Quebec-Ottawa. The e-commerce service for Quebec and the Ottawa area is scheduled to launch in 2021.

Empire (EMP-A-T) is the parent company of Sobeys, and owns 41.5 per cent of Crombie: “So, there is some symmetry there for us to be working together on important initiatives like this,” said Hynes.

As one of Canada’s leading national retail property landlords, Crombie REIT has a strategy to own, operate and develop a portfolio of high-quality grocery-and drugstore-anchored shopping centres, freestanding stores and mixed-use developments primarily in Canada’s top urban and suburban markets.

“Crombie’s focused strategy is evolving nicely with our relationship with Sobeys unlocking value from new acquisitions and state-of-the-art developments, the execution of our active developments remaining on track and on budget, ample liquidity on our balance sheet, access to multiple and innovative sources of capital and the building of one of the best development platforms in the Canadian REIT industry,” said Crombie president and CEO Don Clow in a release accompanying the REIT’s Q1 2019 financial results.

“In addition, our core retail fundamentals remain very solid as is evident by our robust 3.4 per cent same-asset property cash net operating income growth. Year-to-date, we have sold approximately $289 million in assets to fund our growth.”

Among the REIT’s financial highlights, Crombie reported occupancy of 95.7 per cent and an increase of 3.4 per cent in its same-property NOI.

At the end of the quarter, Crombie owned 285 properties across Canada.