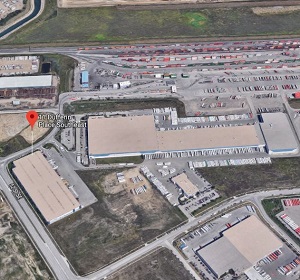 CT REIT was able to take advantage of its relationship with Canadian Tire to compile this full block of industrial land adjacent to the CP Rail terminal in Calgary. (Google Maps image)

During an interview with RENX, Silver discussed the two-year process which resulted in the REIT compiling what he has called a piece of “fabulous real estate.”

Silver said the first part of the process, the off-market purchase of a 625,000-square-foot Sears Canada distribution centre in 2016, was possible because CT REIT knew it had a tenant ready to move in if Sears departed. The tenant would be its controlling shareholder and No. 1 customer Canadian Tire, which already had its existing Calgary distribution centre right next door.

“And that’s effectively exactly what happened,” Silver said of Sears Canada’s subsequent bankruptcy. “So I can’t tell you that we planned it, but it was our expectation that we would have an outcome like (this), which is Canadian Tire is committed to a long-term lease to backfill the 625,000-square-foot building.

Located in the southeast part of the city near the Canadian Pacific Rail intermodal facility, the block is bordered by Dufferin Boulevard S.E. to the south, 52nd Street S.E. to the west and Dufferin Place S.E. to the north.

The properties CT REIT purchased in 2016 include the former Sears Canada distribution centre at 25 Dufferin Place S.E., a 30,000-square-foot building at 5500 Dufferin Boulevard S.E., and a tract of vacant land.

“It had the large building which was 625,000 square feet. It had a smaller building of 30,000 square feet which housed their (Sears’) SLH Transport division. And there were seven acres of vacant land that we acquired adjacent to the property,” said Silver.

The block also includes the 201,000-square-foot building at 11 Dufferin Place S.E., which was already owned by CT REIT and served as Canadian Tire’s Calgary distribution centre. It is being vacated by Canadian Tire and will be available for lease.

The final piece of the puzzle was announced in December 2017, when CT REIT acquired the 5.5 acres of land located adjacent to 11 Dufferin Place S.E. for $4.2 million, completing the assembly of the block.

“So effectively now we control that whole block. Call it a distribution node adjacent to the CP railyards,” Silver said. “It’s a classic example of what real estate’s all about: location. The property’s location adjacent to the CP Rail yards is very important.

“So for us this has been several years in the making, but we’re very pleased with our assembly of industrial properties in southeast Calgary.”

CT REIT entered into a 10-year lease with CTC for the building at 25 Dufferin Place S.E., commencing on May 1. It also has a new tenant for the former SLH Transport building.

There are a couple of options available for the soon-to-be-vacant 11 Dufferin building.

“That building will be available for lease and we’ve also acquired the vacant land that’s immediately to the east of 11 Dufferin Blvd.,” Silver said. “So, we have the ability to expand that building or do something else.”

At the time it purchased the Sears warehoouse, Silver said CT REIT was happy with the leasing rate and returns it received from Sears. However, he was no more optimistic about the future for Sears Canada than many others in the business community as sales declined and losses mounted.

That’s where the relationship with Canadian Tire became a factor. It allowed them to approach Sears Canada with an offer to purchase the properties. CT REIT eventually paid $84 million for the distribution centre.