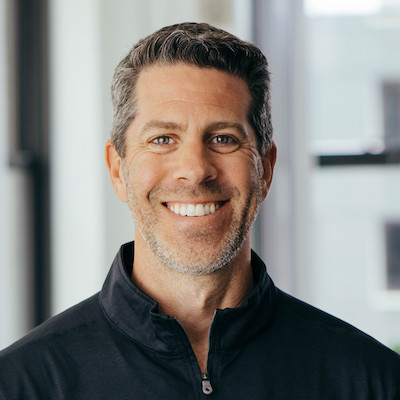 American real estate technology firm HqO has signed its fifth Canadian customer and will open a Toronto office when the border fully reopens between the two countries.

The platform is catching on both north and south of the border.

HqO has evolved from a digital media and events business which was founded in 2009. Kevin McCarthy, Chase Garbarino and Greg Gomer created the original firm, American Inno, which was focused on helping to bolster the innovation economies of American cities.

They sold it to Advance in 2015 and started VentureApp, which focused on developing software for businesses and connecting entrepreneurs with experts in the startup community.

That evolved to focus on real estate, and HqO’s current iteration started in late 2017. The first customer was signed in early 2018, the platform was launched in its first building that spring and it’s been growing ever since.

HqO provides landlords with a digital universal remote control for the building via a smartphone application that can be distributed to everyone in the building. The app will get people into the building with mobile access, register guests, book facilities and resources, order food and drinks, provide information about transportation options and more.

“It removes friction from the user by consolidating the experience of the workday in one place,” Rosenthal told RENX. “For landlords, it helps them create direct lines of communication to end users in the building.”

HqO provides data to give building owners and operators a better idea of how their building is being used and by whom.

“You can make much smarter and more data-driven decisions from what users are telling you through their actions in the application,” said Rosenthal.

Pricing is based on a per-square-foot basis and upon the type of integration and services the customer wants. The average cost ranges from five to 10 cents per square foot and Rosenthal said most building owners pass that cost on to tenant companies. 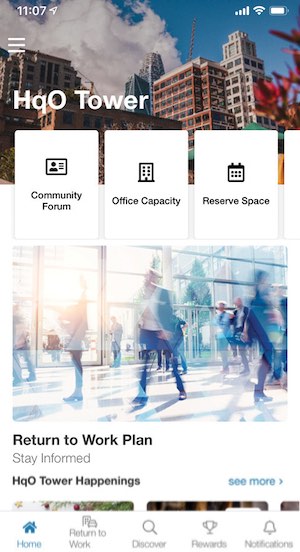 Illustration showing how a portion of the HqO platform could appear on a smartphone. (Courtesy HqO)

HqO is in buildings totalling 154 million square feet in the United States, Canada, the United Kingdom, Ireland, France, Luxembourg, the Netherlands and Norway. The portfolio is comprised of a mix of asset classes and building sizes.

“Some customers are really focused on how they position the building from a leasing standpoint. Others are focused on gathering data on how their space is being used.

“Some are looking for better and more streamlined efficiencies in communication or consolidation of technology for better property management.

“We work with them to define their outcomes and then build a program that’s going to deliver those outcomes, regardless of building size, type or class.”

Rosenthal described how a customer in New York City is using HqO:

“Their goal is to be the leader in tech-enabled real estate in the City of New York.”

Rosenthal cited a study which concluded the top two things commercial real estate executives are looking for coming out of the pandemic are related to data analytics and customer experience.

He said landlords can use HqO to partner with tenant companies looking to incentivize people to return to the office and ease the transition from remote work.

HqO has added almost 90 million square feet to its portfolio since the onset of COVID-19, including 40 million so far in 2021, according to Rosenthal. The company has tripled its revenue and doubled its employees in the past 14 months.

HqO announced on April 14 that it had raised US$60 million in Series C funding from venture capital and commercial real estate firms. It has raised US$106.9 million to date.

The funds will support HqO’s rapid growth, primarily by increasing head count to power the development and delivery of the platform. It’s also adding staff to support customers with on-boarding, training and programming content into the app.

HqO will expand its existing footprints in Boston, New York City, London and Paris, and open new offices in the U.S. Midwest and on the West Coast.

HqO’s platform is being used in 20 assets comprising more than 10 million square feet in Alberta, British Columbia, Ontario and Quebec. Hence the move to open an office in Toronto.

“We’re super-psyched about the Canadian market and can’t wait to get up there and meet some of the customers in person,” said Rosenthal. “We have big plans for Canada and are modelling it on the expansion we’ve already had in New York, London and Paris.”

Slate will roll out the HqO platform at some of its properties later this summer. They’ll include: the 620,000-square-foot Stephen Avenue Place in downtown Calgary; and Slate’s 1.25-million-square-foot midtown Toronto portfolio of office and retail space at eight properties around Yonge Street and St. Clair Avenue.

HqO users will have access to tailored building amenities such as on-site fitness classes, tenant giveaways and discounted pricing for goods and services at retail locations within the Slate portfolio.

HqO has just made its first Canadian hire to oversee sales and is hiring an engineering team of eight or nine. It will also add employees to deal with customer success, tenant experience and other areas.

The company is looking for Toronto office space from afar and its executive team will spend time in the city to push things forward after the Canada-U.S. border fully opens.

“We’re very much believers in face-to-face, in-person relationship-building,” said Rosenthal. “That’s how we’re going to get the best results and build the strongest partnerships.”

InnerSpace allows occupiers to analyze, maximize use of space

Don Wilcox Residential Market Trends National Jun. 15 2021
Steve McLean Business reporter
Steve is a veteran writer, reporter, editor and communications specialist whose work has appeared in a wide variety of print and online outlets. He’s the author of the book Hot Canadian Bands and has taught reporting to college students. He is based in Toronto.