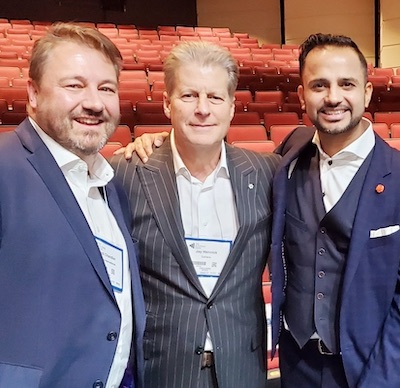 Finneo founder and CEO Amar Nijjar (right) with Scott Chandler, senior managing director of Marcus and Millichap (left) and Jay Hennick, chairman of Colliers International, during a presentation as part of the Colliers proptech accelerator program in Toronto in 2019. (Courtesy Finneo)

Finneo founder Amar Nijjar says his firm is helping to take the commercial real estate financing industry out of the Excel spreadsheet era and into the modern era with its debt and transaction management software.

During the last two years, Finneo has facilitated more than $2 billion in financing for over 250 projects, 80 per cent of which are in Canada and the rest in the U.S., says Nijjar, the company’s CEO. Most of its financing deals are between $5 to $25 million.

“I saw that there were no real tools for me personally, from the companies that I was working with,” says Nijjar. “Technology has solved problems in other industries and I thought I could do the same for real estate.”

Nijjar says he has worked on more than $15 billion in transactions.

During his career, he felt modern tools were lacking for debt brokers – unless Excel spreadsheets, fax machines, Rolodexes and business cards could be considered modern tools. Nijjar realized compensation for debt brokers would be greater if they had better tools to work with.

“In the commercial property financing business work, much of the workflow and transaction management process is manual and the funding process takes a very long time,” he says.

Enter Finneo, a name that combines the word finance, and Neo, the Keanu Reeves character in The Matrix, one of Nijjar’s favourite movies.

The start-up got a major boost when it was chosen in 2019 for Colliers’ Proptech Accelerator program.

“In proptech, it is the No. 1 program for any early-stage company,” Nijjar says. “It was a phenomenal program. We met with a lot of mentors, coaches and investors.”

Finneo obtained a “substantial investment” coming out of the program but Nijjar would not divulge the amount.

For market intelligence, Finneo connects with more than 20 data sources and data companies in Canada and the U.S.

The software features a debt management tool that allows clients to manage loans over their life cycles and to connect with their accounting software.

“Managing the life cycle of loans, conducting annual loan reviews with the lenders, all of that is very tedious for property owners,” Nijjar notes.

Finneo also has a proprietary lender-matching algorithm, which Nijjar says the company is working to patent. For specific deals, the algorithm is designed to pinpoint lenders most likely to make offers, and at the most competitive rates: “That information is very valuable for debt advisors because otherwise they can be sending a deal to a lender that doesn’t make any sense.”

Nijjar says Finneo has about 50 clients on the property management side, including Triovest. On the brokerage side, clients include Colliers.

On average, Nijjar says Finneo has saved clients 35 basis points of spread per year. “In an average term of five years, that’s about 1.5, 1.7 per cent on the rate, which is substantial on a loan amount of $20 million.”

Finneo, which now has 22 employees, expanded to the U.S. in January.

The company has been hiring several debt advisors. Five debt advisors who previously worked for large, traditional debt brokerages joined the company in Charlotte and Miami. Finneo plans to have an additional 10 advisors in the U.S. and five advisors in Canada this summer.

He predicts 80 per cent of business will be in the U.S. in a few years, given the country’s much larger lender base. The goal is to add 30 debt advisors throughout the U.S., in Houston, Dallas, Los Angeles, Atlanta, Chicago, New York and possibly Seattle over the next 24 months.

Finneo has six debt advisors in Toronto and plans to expand to Vancouver, Calgary and Montreal by the end of the year.

In five years, Nijjar hopes Finneo will have 100 debt advisors.

Finneo is currently working on a credit intelligence report feature for lenders to provide independent intelligence on properties and tenants. For example, using public data from sources such as Google and Yelp reviews on office tenant performance, “we’ll be able to predict with a high degree of accuracy the chance of that tenant defaulting.”

The feature could launch by the end of the year.

A goal for Finneo in five years is to be able to use data, lending patterns and market intelligence reports to predict such things as how loans are performing for certain property owners and where a given lender’s lending appetites will be, Nijjar says.

Steve McLean Commercial Property Management National Mar. 25 2022
D
Danny Kucharsky Business reporter
Danny is a multiple award-winning journalist based in Montreal, who has written for about 75 magazines and newspapers in Canada and the U.S. His credits include The Globe and Mail, Montreal Gazette, Maclean's, Chicago Tribune and a wide variety of business, specialized trade and medical magazines. Danny was also the Montreal correspondent for Marketing Magazine for several years.