First Capital REIT has agreements to sell three of its Western Canadian shopping centres, and has... 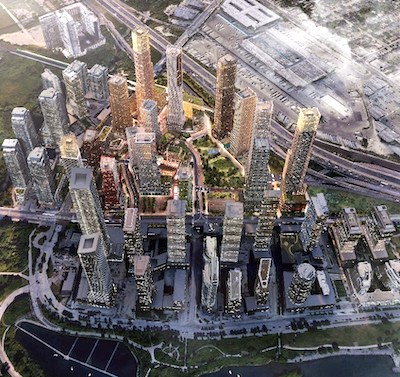 First Capital REIT has agreements to sell three of its Western Canadian shopping centres, and has entered into partnerships on two major Toronto development properties. In total the four transactions amount to approximately $400 million.

The REIT is selling neighbouring retail properties in Airdrie, Alta., the Towerlane Centre and Airdrie Village. It is also selling the Langley Mall in Langley, B.C.

In Toronto, First Capital is selling a 50 per cent interest in its Station Place mixed-use development at Dundas Street West and Aukland Road to Centurion Apartment REIT. It will also partner with Pemberton Group to develop the 28-acre former Christie Cookie factory site located at 2150 Lake Shore Blvd. W. at Park Lawn Road.

“Collectively, these transactions achieve several of First Capital’s strategic objectives, including crystallizing value created through the zoning, entitlement, and property development processes while also maintaining a share of future potential value growth, strengthening our balance sheet, and further aligning our real estate portfolio with our super-urban strategy,” said Adam Paul, the president and chief executive officer of First Capital, in the announcement Tuesday night. “Notably, we have met these objectives while selling the properties at prices that are well in excess of their respective IFRS values.

First Capital is an owner, operator and developer of grocery-anchored and mixed-use properties in Canada’s largest cities. It has $10 billion of assets under management.

First Capital exercised its option to purchase CPP Investments’ 50 per cent interest of their 28-acre development site in Etobicoke for $56 million, and subsequently sold it to Pemberton Group for $156 million.

“The master plan is complete and zoning will soon be in place, permitting 7.5 million square feet of density plus many elements reminiscent of a complete community, including parks, public realm, transit and other infrastructure, as well as extensive community services,” Paul said during the REIT’s Aug. 5 Q2 2021 earnings call.

“Therefore, it is the appropriate time to add a strategic and aligned partner with deep residential and major construction expertise. We feel Pemberton Group, an existing partner of FCR, was a superb candidate, and we’re thrilled to expand our partnership on such an important development.”

Pemberton is one of the largest residential condominium developers in the Greater Toronto Area. It has completed more than 17,000 units and has 6,000 under construction.

First Capital and CPP Investments acquired the site in 2016 to transform the large brownfield site. They engaged the U.K.-based Allies and Morrison architectural firm to help bring the project’s vision to life.

The next phase will include site and transit infrastructure improvements, followed by residential and mixed-use construction. Plans are for residential, retail and commercial uses, including approximately 750 affordable housing units and a minimum of 3,000 family-oriented units.

“Pemberton will provide all development and construction management services in connection with the residential and the infrastructure works,” First Capital executive vice-president and chief operating officer Jordie Robins said during the earnings call. “First Capital will act as development manager of the retail and commercial components and, upon completion, will act as property and leasing manager for the retail and commercial space.”

First Capital has a binding agreement to sell a 50 per cent interest in Station Place to Centurion Apartment REIT. The agreement also involves its existing partner at the site, Main & Main.

When the transaction completes, which is expected in Q3 of 2021, First Capital’s stake in the property will be 35.4 per cent, down from 70.8 per cent currently.

The property is adjacent to Kipling Station, a multi-modal transit hub with connectivity to the TTC, the GO train and the Metrolinx Kipling bus terminal.

“The transaction partners First Capital with an aligned residential owner and manager that has experience with multi-residential assets in Canada and the United States,” the announcement states.

Centurion will be the property manager on completion of the development.

Located in the Calgary suburb of Airdrie, the Towerland and Airdrie Village centres are situated on 22 acres of land and anchored by Safeway, Dollarama, Staples, Shoppers Drug Mart and Goodlife Fitness. The properties have 250,000 square feet of net rentable area and are 95 per cent leased.

Langley Mall is a 137,000-square-foot shopping centre anchored by a No Frills grocery store and is 96 per cent leased. The property has long-term redevelopment potential but, like the two Airdrie properties, its demographic statistics are “notably inferior” to First Capital’s overall profile, the trust says in the announcement.

One of Langley Mall’s anchor tenants failed in early 2020. Owing to the tenant’s long-term lease at a below-market rate, the turnover created a substantial increase in property value and presented an opportunity for First Capital to divest.

Both the retail transactions are slated to close later in 2021.

All the transactions remain subject to customary closing conditions.

– With files and updates by Don Wilcox

Steve McLean Residential Market Trends National Jun. 11 2021
Steve McLean Business reporter
Steve is a veteran writer, reporter, editor and communications specialist whose work has appeared in a wide variety of print and online outlets. He’s the author of the book Hot Canadian Bands and has taught reporting to college students. He is based in Toronto.