The opening of a 150,000-square-foot Costco store and warehouse at the massive mixed-use Taza dev... 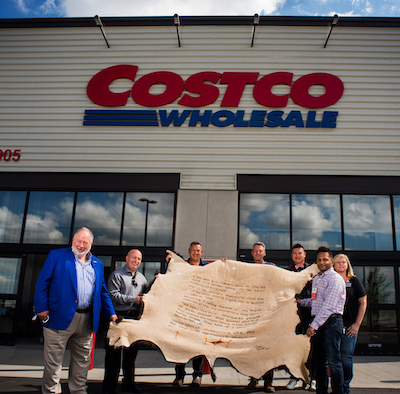 Costco, the first major anchor of the Taza development on the outskirts of Calgary, officially opened on Friday. (Courtesy Taza Development Corp.)

The opening of a 150,000-square-foot Costco store and warehouse at the massive mixed-use Taza development on the Tsuut’ina Nation is the validation of years of preparation and planning.

The Costco store is the first anchor tenant in The Shops at Buffalo Run retail centre on the outskirts of Calgary, as well as being Costco’s first warehouse located on a First Nation development in Canada.

“The official opening of Southwest Calgary Costco validates that Taza is open for business,” said William Briscoe, the CEO of Taza Development Corp. “Because of the collective efforts between Taza Development Corp. and Costco, we have been able to secure a leading anchor tenant to provide various employment opportunities, even as we navigate through these current economic times.”

Costco, The Shops at Buffalo Run

The Southwest Calgary Costco is located in The Shops at Buffalo Run at Taza Exchange, which is planned to be a vibrant regional retail, office and tourism district, with other stores and restaurants part of the project.

The Costco is located at 12905 Buffalo Run Blvd., at the corner of the Southwest Calgary Ring Road and 130th Avenue SW. The official launch of the location is taking place Friday morning at the site.

“It does kick off our overall development as being our first anchor tenant for not only Taza itself, but also The Shops at Buffalo Run which is a 260,000-square-foot retail centre that we will be completing in the fall of 2022,” said Bryce Starlight, the vice-president of business development and investor relations for Taza.

“It also provides some amazing opportunities for Nation members to be employed here and offers almost 100 positions for Tsuut’ina and First Nation employees of a 300-employee warehouse.”

The Shops at Buffalo Run is located just north of the Costco parking lot. It is planned as a regional and community shopping centre with several large format retailers but also focusing on restaurants. 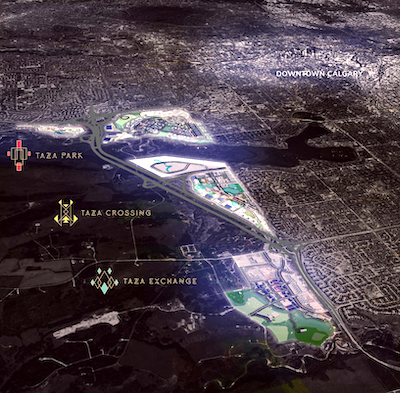 An overview of the 1,200-acre Taza development on the outskirts of Calgary. The three distinct sectors of the 25-million-square-foot project are outlined. (Courtesy Taza Development Corp.)

Taza is currently negotiating with grocers, financial institutions and professional office tenants. Starlight anticipates more than 40 tenants will be in the area.

“Right now we have many conditional deals. We’re actually hoping to make some pretty big announcements in the next couple of months here,” he said. “Our leasing has been fairly strong for the last two years, actually. The Costco will definitely open up some additional opportunities.”

Starlight said Taza is in negotiations on about 80 per cent of the total square footage.

“Because it is a 40-year build-out, we’re also looking at not just retail but at some light industrial that would be used for, say, health care, innovation, technology,” he said. “We’ve got residential components identified for other areas within the development.

“It’s going to be a pretty wide range of retail right from your smaller 1,200-square-foot CRUs to your large retail formats. We’re actually in negotiations with a number of tenants at this point on other locations.”

He said the developer has focused on areas close to the Ring Road to house future retail on the massive, 1,200-acre site. The overall development is a joint venture between Tsuut’ina and real estate company Canderel.

It is one of the largest First Nation development sites in North America.

“Our location and the approval process has been extremely attractive to tenants within the Calgary region,” said Starlight.

“I think everyone’s taking a hit in this climate; however the deals we were negotiating pre-COVID have been the same ones that we’re negotiating today.”

An overview of Taza

The overall plans for the Taza development will include:

Speaking about the opening of Costco, Briscoe said: “What is very significant is this is really the transition from years and years of planning and preparation to really being open for business and the start of many, many years of economic development right at Tsuut’ina in southern Alberta – a major project.

“What is most significant is that this is the first of many and it solidifies the project. It demonstrates that all the hard work and years – and many, many decades prior to the partnership even – all coming into fruition and becoming real.

“It’s moving. I’ve been in the business for a long time and I would say that this is by far the greatest achievement I’ve been a part of. . . . It takes the dream into reality.

“It also is evidence that we have a development approval system that works, that is efficient. We have design guidelines that work. We’ve successfully integrated a cultural awareness that takes the community development to another level.

“This project, because of its scale, across the country we’re demonstrating true economic reconciliation and what can happen if you dream big and put a lot of hard work into it. They don’t have to stay dreams.”

Briscoe said the first phase of Taza’s residential component is likely to be about two years out.

“There’s still a lot of work we have to do. We’re going through different design factors. We have market studies that we’re still working through. Obviously everything is driven by the market. Those details will come out later,” Briscoe said.

“Right now we’re really just focused on introducing the world to Taza Exchange and The Shops at Buffalo Run.”

Massive Taza development kicks off with a retail first

Mario Toneguzzi Residential Development Calgary Jul. 30 2020
M
Mario Toneguzzi Business reporter
Mario Toneguzzi, based in Calgary has 37 years of experience as a daily newspaper writer, columnist and editor. He worked for 35 years at the Calgary Herald covering sports, crime, politics, health, city and breaking news, and business. For 12 years as a business writer, his main beats were commercial and residential real estate, retail, small business and general economic news. He nows works on his own as a freelance writer and consultant in communications and media relations/training.