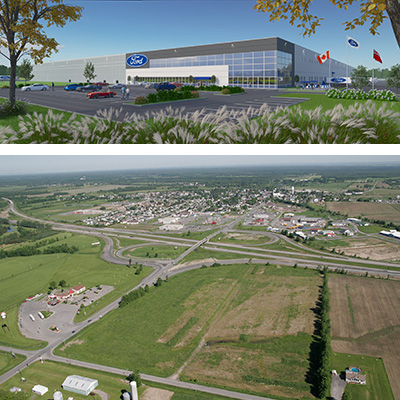 RoseFellow and JV partner Bertone Development Corp. have signed a 15-year lease with Ford Canada to build a 531,000-square-foot distribution centre at a cost of $100 million in Casselman, east of Ottawa.

Site mobilization has begun at the nearly tw0-million-square-foot site that will house the facility and delivery is scheduled for the beginning of 2023.

RoseFellow had been negotiating with Ford Canada since  November.

“We’re very excited and very happy,” says Tsoumas. “It was a long and arduous process but we came out on top.”

He says the distribution centre will be high-tech but not automated and will have a 36-foot clearance. It is not known how many people it will employ.

Ford going from one to two distribution centres

Along with an office component and parking facilities, the site will also accommodate a trailer yard and a dual docking system. There is little room for future expansion.

“They’ve got much more robust docking equipment, much more robust building materials (than is the standard for distribution centres),” Tsoumas says of Ford Canada. “This is a very robust and well-designed industrial building. This is not just a standard 32-foot cookie-cutter.”

Last year, Ford Canada said it would replace its large parts distribution centre in Bramalea, Ont., which has been in operation since 1964, with two smaller locations in Eastern Ontario and west of Toronto.

The carmaker said the goal was to improve customer satisfaction and expedite parts delivery time to dealers.

In 2020, RoseFellow partnered with Bertone which has owned 931,395 square feet of land in Casselman for several years. RoseFellow bought into the existing limited partnership.

Initial plans called for RoseFellow and Bertone to build three small industrial buildings on spec for about $60 million at the nearly one-million-square-foot site.

However, that all changed when RoseFellow was contacted by Ford Canada’s brokerage to see if it could accommodate Ford’s requirements for a new distribution centre.

The LP made three separate transactions with three different landowners to acquire the additional million square feet needed to secure the Ford deal.

The Ford deal “is significantly better” than having three smaller buildings with multiple tenants, Tsoumas says. “This is a very big accomplishment for Casselman (and) also better for our group.”

Casselman has a capable workforce, a number of services and a high rate of bilingualism, he says.

As part of the acquisition strategy to assemble the land parcels for Ford, the JV partners needed to acquire 321,000 square feet of additional land that will not be required for the carmaker’s distribution centre.

A spec industrial building next to Ford site

Instead, RoseFellow and Bertone will invest about $25 million to build on the site a 125,000-square-foot industrial building on spec next to the Ford facility.

Construction of the spec building should start at the beginning of next year and be completed at the end of 2022. It will have a 32-foot clearance.

About a quarter of the two-million-square-foot Ford distribution site is actually in Casselman’s neighbouring municipality The Nation.

“We needed the two municipalities to work together to assure that the project goes ahead. Basically, two cities came together to get this deal done,” Tsoumas says.

He notes Casselman is the first city between the Quebec-Ontario border and Ottawa to have a Tesla charging station and a Starbucks.

RoseFellow was founded in 2020 by Jager and Tsoumas, two former rivals at Montoni and Broccolini, respectively.

The Montreal-based company has more than 3.25 million square feet of industrial and residential buildings set for construction in 2022, primarily in the Montreal area.

Montreal-based Bertone has built a number of retail, office, industrial, residential and mixed-use projects in Montreal and throughout Quebec.

Danny Kucharsky Commercial Transactions Greater Montreal Sep. 14 2021
D
Danny Kucharsky Business reporter
Danny is a multiple award-winning journalist based in Montreal, who has written for about 75 magazines and newspapers in Canada and the U.S. His credits include The Globe and Mail, Montreal Gazette, Maclean's, Chicago Tribune and a wide variety of business, specialized trade and medical magazines. Danny was also the Montreal correspondent for Marketing Magazine for several years.