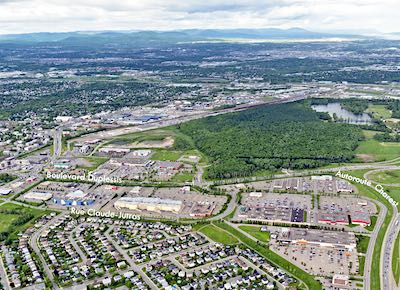 The sprawling Mega Centre Sainte-Foy power centre in Quebec City has been sold to Forum and Crofton Moore. (Courtesy Forum)

The 60-acre site at the intersection of Autoroute 40 and Autoroute Duplessis, in Western Quebec City’s dominant retail node, has 529,000 square feet of retail space that’s 93 per cent leased. Mega Centre Sainte-Foy is anchored by Walmart, which has a long-term lease, while other tenants include Marshalls/HomeSense, Bureau en Gros, Cineplex, Jysk and The Brick.

Forum co-founder Dean Mendel loves the neighbourhood and its demographics and believes Mega Centre Sainte-Foy is one of the best power centres in Canada. The acquisition gives the two purchasers their first presence in the city.

“We’re in Levis, across the water, and wanted to get active in Quebec City,” Mendel told RENX. “We’ve looked at a lot of assets over time and just haven’t found the right one. But this one big shot gets us pretty active.”

Forum launched in 1988 and has offices in Montreal, Edmonton and Burlington, Ont. It’s a full-service developer and owner of neighbourhood shopping centres across Canada. It also owns some Quebec apartment buildings as part of its $1-billion real estate portfolio.

Montreal-headquartered Crofton Moore has been active in the management, leasing, construction, development and repositioning of retail and office space in Canada since 1997. It has direct involvement with more than 11 million square feet of real estate ventures, primarily in the Montreal and Toronto areas.

“We have a friendship and a really good working relationship, so we had continued to look at doing another large acquisition together,” said Mendel, who wouldn’t reveal the ownership ratio of Mega Centre Sainte-Foy but noted it isn’t a 50-50 split.

Crofton Moore will oversee bookkeeping and leasing at the centre while Forum will be responsible for operations, construction, asset management and financing.

The acquisition closed on Dec. 20 and the immediate goal is to fill Mega Centre Sainte-Foy’s 35,000 square feet of vacant space. About 25,000 of that is in one space and the remaining 10,000 is scattered throughout the rest of the centre.

“We think we’ll fill it up quickly, but I guess time will tell,” said Mendel. “The recent closures due to COVID are not going to be terribly helpful to us.

“But that said, we’re very, very active in retail and have lots of relationships that we’ll see beyond a few months of inconvenience.”

The plan over time is to add a bit more retail, including restaurants, to the centre and upgrade some tenancies to enhance the retail offering.

The site had a municipal valuation of $123 million, according to Mendel.

“We bought it at what we think is a decent price and we’ll try to create a lot of value,” he said.

While the site’s 60 acres also offers space for potential multiresidential development in the future, Mendel doesn’t believe it’s financially feasible at the moment.

“One of the challenges in the Quebec City market is that rents aren’t particularly high, so the current economics probably don’t allow for it, given that construction costs are so out of whack lately. It’s a strong demographic, so we would probably hit the higher end of the rents.

“But rents in general are quite low, so it would be hard to make real money building rental apartments right now. We’re not really interested in condos.

Mario Toneguzzi Commercial Market Trends National Nov. 24 2021
Steve McLean Business reporter
Steve is a veteran writer, reporter, editor and communications specialist whose work has appeared in a wide variety of print and online outlets. He’s the author of the book Hot Canadian Bands and has taught reporting to college students. He is based in Toronto.