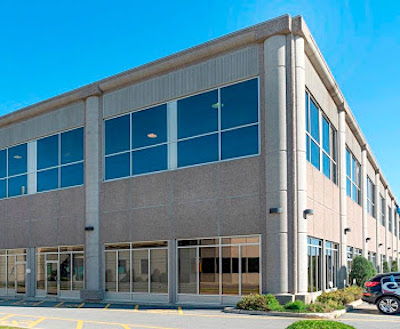 Groupe Quint has acquired this multi-tenant industrial building at 9175 Langelier Blvd. in the Montreal borough of Saint-Léonard as part of a two-property portfolio. (Courtesy Groupe Quint)

Groupe Quint has acquired two industrial properties totalling more than 550,000 square feet in Montreal and nearby Saint-Hyacinthe, in transactions with previous owner Olymbec.

“They were key for us for our acquisition strategy,” Montreal-based  Groupe Quint president and founder Ian Quint told RENX. “They’re great properties for what our goals are.”

Quint declined to provide the selling prices for the two properties. The transactions closed on Aug. 14.

The 411,419-square-foot property in Saint-Hyacinthe – about 50 kilometres east of Montreal – is located at 3000 Cartier St. at the corner of Vanier Avenue and sits on 1.13 million square feet of land.

Built in 1958, the industrial complex is fully leased to RONA, Baxter Foods and Bitfarms, a blockchain infrastructure company that operates a large cryptocurrency mining operation.

Groupe Quint plans to expand the Saint-Hyacinthe building on the site’s excess land, “depending on what happens with RONA,” which is using the space for storage.

The building has a large power entry which would be of interest to many tenants. It also has rail access, which is not being used by any of the current tenants, he said.

The Montreal building, which has a 24-foot clearance, does not require major capital expenditures: “We’ll just re-tenant it and have it as an income property.”

During the due diligence period on the property, which lasted from June to August, Groupe Quint was able to rent about half of the 55,000 square feet of vacant space to new tenants in the distribution sector.

Groupe Quint is seeking monthly rent of about $8 net per square foot for the remaining space.

Since its founding in 2015, Groupe Quint has acquired and developed more than eight million square feet of retail, industrial and office space in Canada and the United States.

About 40 to 50 per cent of that space is industrial and that percentage should increase, Quint said.

“We want to be primarily industrial,” while continuing to do office acquisitions as well as buying retail “opportunistically.”

“(If) there’s still opportunities in retail where we feel that we can create value, then we will continue to buy retail.”

Groupe Quint dubs itself the fastest-growing real estate developer in Quebec, as it is acquiring between two and four million square feet of real estate annually, depending on opportunities.

“We’re very active in acquisitions.” As opposed to when he started the company, when most growth was through new construction, “most of our growth is through acquisitions and redevelopments of existing properties,” Quint said.

Groupe Quint plans to invest about $20 million to transform the vacant site into a mixed-use retail and office development.

Most of Groupe Quint’s industrial properties are in Quebec, but the company is under contract for an industrial building in Ontario, at a site he declined to name.

Groupe Quint also has growing percentage of its industrial space in the U.S. in cities such as Memphis and Tampa Bay.

“We’re actively pursuing deals (in the U.S.) and we’re under contract and due diligence on a large square footage of primarily industrial properties,” Quint said.

“I anticipate by the end of this year that we would have in excess of 2 to 2.5 million square feet in the U.S.”

Groupe Quint is looking at properties across Texas, Atlanta and St. Louis, markets it previously identified as having opportunities.

“We wanted to beef up our knowledge” of these markets for several years before pursuing any offers on properties, Quint said.

Mario Toneguzzi Commercial Development Calgary Aug. 11 2020
D
Danny Kucharsky Business reporter
Danny is a multiple award-winning journalist based in Montreal, who has written for about 75 magazines and newspapers in Canada and the U.S. His credits include The Globe and Mail, Montreal Gazette, Maclean's, Chicago Tribune and a wide variety of business, specialized trade and medical magazines. Danny was also the Montreal correspondent for Marketing Magazine for several years.