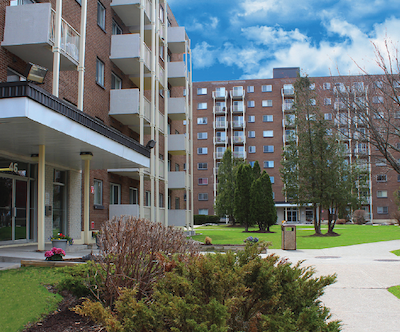 This three-building apartment complex on Bedard Street in Gatineau, Que., has been purchased by Montreal-based Groupe Hazout. (Courtesy Marlin Spring)

A growing Montreal real estate investor, Groupe Hazout, has bought its second property in Gatineau with the acquisition of three apartment towers along Bedard Street for $39 million.

The acquisition of the 320 apartments is the largest single purchase for Groupe Hazout, which now owns and operates about 1,100 apartments in Gatineau and Montreal.

The properties were acquired from Marlin Spring and Greybrook Realty of Toronto, which had purchased the three buildings in 2019. At that time, they were bought as part of a portfolio which included a 200-unit building in neighbouring Ottawa (that property was not part of this latest transaction).

“The interest in Gatineau is first of all the proximity to Ottawa. The rents are high in Ottawa, so we realize that a lot of tenants are working in Ottawa and renting in Gatineau because of the price difference being considerably lower.”

That is continuing to create demand in the city of about 300,000 residents, even through the pandemic. Hazout said there is not only an overall shortage of rental product in Gatineau (the vacancy rate was 1.6 per cent in 2020, according to CMHC), there is an acute shortage in the mid-market segment.

“There is absolutely no renovated product,” he noted. “There is nothing in the middle.

“Usually what we do is we renovate the units to condo-type (quality).”

That’s something Marlin Spring had begun to do after its purchase, but only a few units have actually been upgraded so far, Hazout said. His firm intends to continue the upgrades both within the units themselves and later, in the hallways and other spaces.

The properties at 42, 44 and 46 Bedard St., are in close proximity to downtown Hull (Gatineau’s core business district) and downtown Ottawa, with access to schools, the Hull hospital campus and Gatineau Park.

The off-market transaction was brokered by Aik Aliferis, senior managing director of Institutional Property Advisors, in conjunction with the Marcus and Millichap Quebec office.

Groupe Hazout also bought a mixed-use land assembly along Laurier Avenue on the approach to Ottawa. He said at the moment the firm is considering its options for that property.

Hazout said he’s continuing to look both in Gatineau and Ottawa for potential acquisitions, as well as in Montreal.

“We are actually looking at multiple properties in Ontario right now.”

“My first property I was 19,” he said. “Buy one, refinance, then buy another. Then I bought in Cornwall (Ont., near the Quebec border) because I didn’t have enough money to buy in Montreal.

Hazout said the firm generally invests its own equity in its acquisitions, though occasionally it will bring in a partner. Groupe Hazout, he said, has been averaging an acquisition or two each month, though they’ve generally been smaller or mid-sized assets.

Although there is growing competition for larger multifamily properties such as the Bedard Street complex, Hazout said as a private operator his firm has an advantage over some of the larger institutional investors which have become so active in Quebec.

“We are very active in the Quebec market and I think a lot of people prefer to go with us (rather) than REITs because we can act quicker. We don’t have all the restrictions that they have.”