Sender Gordon’s approach to life and business is to answer a question with a question. Ten months... 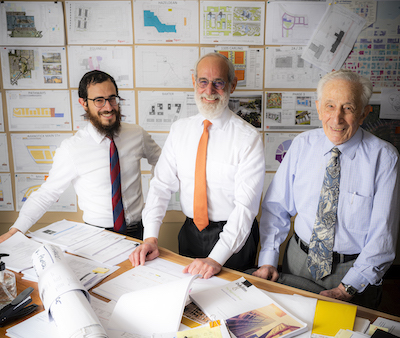 Sender Gordon’s approach to life and business is to answer a question with a question.

Ten months and counting into a pandemic, it’s certainly the time to be asking plenty of questions, particularly when you have just taken the reins as the third-generation chief executive of a large family enterprise.

“Are we doing the right thing? Do we need to change? Yesterday’s trick may not work for tomorrow – you have to be creative and always thinking about what tomorrow will bring,” said the 33-year-old. “The pandemic is a stepping stone to ask what tomorrow is going to look like.”

On Jan. 1, Sender became president and CEO of Regional Group, taking over from his father, Steve Gordon.

In the 62 years since it was founded by Steve’s father-in-law, Len Potechin, Regional Group has grown into a vertically integrated real estate investment, development and management firm focused on the Ottawa-Gatineau region.

It manages almost three million square feet of commercial property, while the residential side of its business has constructed about 2,000 homes and counting.

Regional Group’s holdings include the award-winning eQ Homes – the homebuilder behind such projects as Greystone Village, a 26-acre master-planned community that has earned a number of industry kudos for environmental sustainability and human health performance.

The Regional team is also responsible for CITIGATE.

The 170-acre master-planned project incorporates a booming retail core, a designated auto mall and a corporate campus that will soon be home to the single largest building in the National Capital Region – Amazon’s newest state-of-the-art, multi-level fulfillment centre.

“It always starts with the generation before you,” said Steve. “We have been blessed with a grandfather who came to this country with nothing (Len Potechin’s father Izzy) and was a serial entrepreneur who transferred a love for people and a love for doing business to his children and my father-in-law . . . we are a family but also Regional is a family.”

This approach to building a lasting company extends beyond the concept of “corporate culture,” Steve added.

“It’s also a value system. You are trying to impart aspirations, goals, a mission that people can buy into and strive to achieve. I am proud that my son is in the position to continue that legacy.”

While Sender has been exposed to the business of Regional since he was a boy, following in his father’s footsteps wasn’t always a given. In fact, he originally studied talmudic law and was ordained as a rabbi.

However, after giving the family business a try at his grandfather’s urging, Sender realized how much he loved it. A sense of responsibility and expectation as stewards and community builders is instilled into the next generation from an early age, he said.

“You have big shoes to fill – you are a product of your history, but you also have a responsibility to shine. That impacts the family and the business culture, where the people are the most important asset.”

To cap it off, the younger Gordon made his mark by being named to Ottawa-Gatineau’s Top-Forty Under 40 for 2019.

What does Sender expect for the Ottawa real estate market as we move past the pandemic?

“Overall, what is the value that real estate is providing to the end user? If we as an industry always consider that, then there will be a user and a taker . . . in other words, a bright future.”

Each industry sector, of course, has its own story.

Residential remains one to watch closely. On the industrial side, Sender expects Ottawa will continue to benefit as a growing order-fulfilment and logistics hub as the surge in e-commerce drives the need for last-mile distribution.

And while conventional brick-and-mortar retail will not disappear, the pandemic has increased the pressures the industry already faced to determine what kind of in-store experiences will be key to attract shoppers.

“While many people are working from home, there will always be a need for collaboration,” Sender said. “Will it be in the same office space as before? I don’t think so . . . it’s a matter of redefining the needs of this new end user.

“There will always be value for people to work together and collaborate. The era of office space is not over.”

Both Gordons remain bullish on Ottawa’s prospects and are enthusiastic proponents of what the city has to offer as a place to live, work and raise a family, with its economy continuing to diversify and city hall hammering out a new official plan for the next 20-30 years.

Sender will continue to ask questions as he gets comfortable in those big shoes.

“I am very grateful to both my father and my grandfather,” he said. “It is a challenge to mentor anyone, but they both put so much effort into my development and it’s been an experience to get to know them in a different way.

“The management team, too, has shown great patience as I earned their trust and respect.”

The elder Gordon, meanwhile, has become Regional’s executive chairman. He will also work to build the family office, which will pursue other investment opportunities beyond real estate.

Don Wilcox Residential Transactions Ottawa Jan. 7 2021
Leo Valiquette Business reporter
Leo Valiquette is a freelance marketing communications consultant and business writer, and former editor of the Ottawa Business Journal. He has also landed a publisher for his first novel, but that’s another story.