How Toronto’s CityPlace found its sense of place

The 45-acre master-planned CityPlace community in Toronto, with 30 residential towers and 18,000... 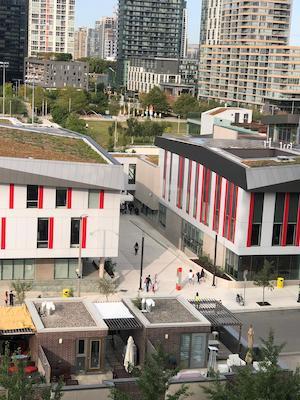 As Toronto’s CityPlace has been built out, what originated as a “bland, unimaginative” series of residential towers has become a vibrant downtown Toronto community.

The 45-acre master-planned CityPlace community in Toronto, with 30 residential towers and 18,000 residents, has been transformed from once-disused railway lands into a thriving community.

It started as a uniform, bland and unimaginative residential community without any of the attributes that characterize a real neighbourhood. However, as the master plan was built out and added density and community uses, CityPlace has transitioned into a vibrant mixed-use neighbourhood.

While the recipe for a livable community was there, in the early days all the ingredients weren’t. Instead, the neighbourhood had a bad reputation as it had density without amenities and lacked the youthfulness it promised to deliver.

With time, more people moved in and retail, parkland and community infrastructure such as a school and a community centre were added.

For over a decade, though, the neighbourhood was looked down at. Some of the most significant issues with CityPlace included: transportation, building quality, amenities and character.

The character of CityPlace

The character of CityPlace always had a bad rep.

The area, which is roughly bounded by the CN rail corridor, Spadina Avenue, the Gardiner Expressway and Bathurst Street, is a brand new community without the charm that captivates the cool areas of the city: old buildings, exposed brick walls, large floor-to-ceiling windows and the wonders of old industrial buildings are non-existent in CityPlace.

Instead, CityPlace was mostly comprised of glass high-rise buildings surrounded by railway tracks and a highway.

Most critical for the feel of the place – the main commercial spine along Fort York Boulevard – took a long time to become active. The planned community centre took an extended period to be built and the neighbourhood was for a long time without these major amenities.

However, these perceptions have been replaced in recent times by a sense of place as more families move in or have children, with new landscaping, open spaces, establishments and what will become its own unique rich tradition of character, especially along Fort York Boulevard.

The neighbourhood has many tall buildings, which is something that gets almost automatic opposition in Toronto, regardless of how the area actually functions.

Many had claimed, and rightfully so, that CityPlace lacked amenities when it first started with nowhere to go and nothing to do.

Like many new master-planned communities with growing pains, this dense village has been transformed with a range of open spaces, facilities and businesses that have made vertical living enjoyable.

Today the local residents’ association has over 11,000 members with high community participation in programs and events like farmers’ markets, the Bentway park, the Canoe Landing Community Centre and a top-notch public library.

Another recurring theme was the quality of the buildings.

Many residents reported cheap materials and low standards across their units and shared spaces along with flooding, electrical problems and elevator issues.

One of the biggest issues with such rapid density and the lack of amenities nearby is the number of residents entering and leaving the area.

Despite its central location, this congestion within the neighbourhood caused difficulties for pedestrians, vehicles and public transit. Currently, only one main arterial roadway along Fort York exists and it is mainly used for through traffic.

However, as the neighbourhood matures and more amenities become present with new transit options and traffic management solutions, congestion should be minimized.

CityPlace had a brilliant strategy to deal with the fact that retail needs people (density) in order to thrive. The retail units started as residential or live-work units, because at the beginning, retail would have failed.

These units have the ability to transition to retail over time as demand grows.

In recent years, the retail options have started growing in CityPlace and yet it’s not quite there yet.

For the demographics that dwell in the neighbourhood, there are greater needs – and the potential to become one of the coolest retail areas in the city, much like Queen West.

Even with some of these shortcomings, CityPlace possessed (if at times they were hidden) the building blocks for a great community:

* narrow roads with bike lanes in each direction;

* optional retail uses at grade and a built form that defines the street.

As we look to new master-planned communities and large-scale developments, there is much to be learned from CityPlace.

Most importantly, however, we must be patient. Livability is not a perfect science or one that exists with the switch of a button; it takes time, messiness and tension to find its footing within the urban fabric.

There is no perfect development or an area without any problems and we can’t always expect the best amenities, the most unique character, the greatest architectural marvels and impeccable transit.

Sometimes, we need to do the best we can given the constraints that we have, and that is CityPlace.